Theresa May tried to calm fears about Brexit chaos with her latest speech, but it didn't exactly go to plan - Canary 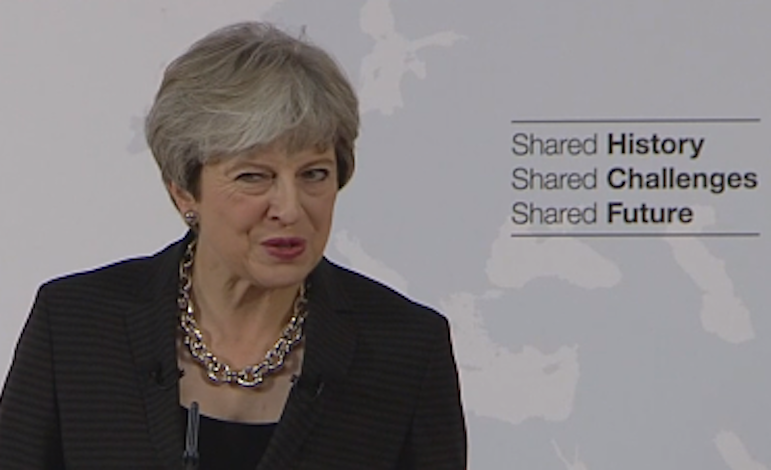 Theresa May’s big Brexit speech in Florence conformed to most expectations – except, perhaps, her own. Following weeks of stalled negotiations and squabbles within her cabinet, the entire Brexit process has been called into question. Speaking on 22 September, to a room in which most important EU delegates and officials were absent, May will have wanted to calm fears about about Brexit chaos. But she was far from convincing.

In the front row listening to May sat Foreign Secretary Boris Johnson, Brexit Secretary David Davis and Chancellor Philip Hammond. These three men effectively represent the two sides of a Conservative Party split down the middle over Europe.

Davis has often promoted ‘hard Brexit’ and spoken against the possibility of a transitional arrangement, as has Johnson. Hammond, on the other hand, has advocated a softer approach, retaining access to the single market for a fixed period.

May, of course, finds herself with the impossible job of trying to keep both these sides happy. If she does not, her party falls apart. Those hoping for clarity will therefore be disappointed. In Florence she waffled and avoided details.

May spoke of “our shared challenges and opportunities” with the EU. And went on to list them as refugees, terrorism, the internet and North Korea.

She wrote off suggestions that have been put forward, such as retaining European Economic Area (EEA) membership or a free trade deal, saying:

In a further attempt to placate the right wing of her party, she even confirmed her continued belief in the mantra “no deal is better than a bad deal”, when asked a question by the BBC’s Laura Kuenssberg.

At that point, listeners may have thought the UK will walk away from negotiations if necessary. But in order to appease the Hammond faction, May also proposed a transitional arrangement, which she described as “an implementation period of around two years”. Such an arrangement would likely come at a cost of tens of billions.

In keeping with much of her premiership so far, May’s weak speech contained little in the way of detail. Instead it attempted to cover the gaping chasm in her cabinet. The Prime Minister thus said everything but mostly nothing, and will not have convinced doubters that Brexit can be a success.

Essentially, she will buy two extra years of negotiating time from the EU and hope that something comes up.