The Daily Mail has been forced to issue a correction over a controversial story it ran about Jeremy Corbyn. The right-wing tabloid printed the front page in the run-up to the 8 June general election. But The Daily Mail has taken over four months to admit to misleading the public with both its headline and the article.

On 12 May, The Daily Mail ran a front-page story called Corbyn’s Fantasy Land, saying that Labour’s “class war manifesto would cost every family £4,000”: 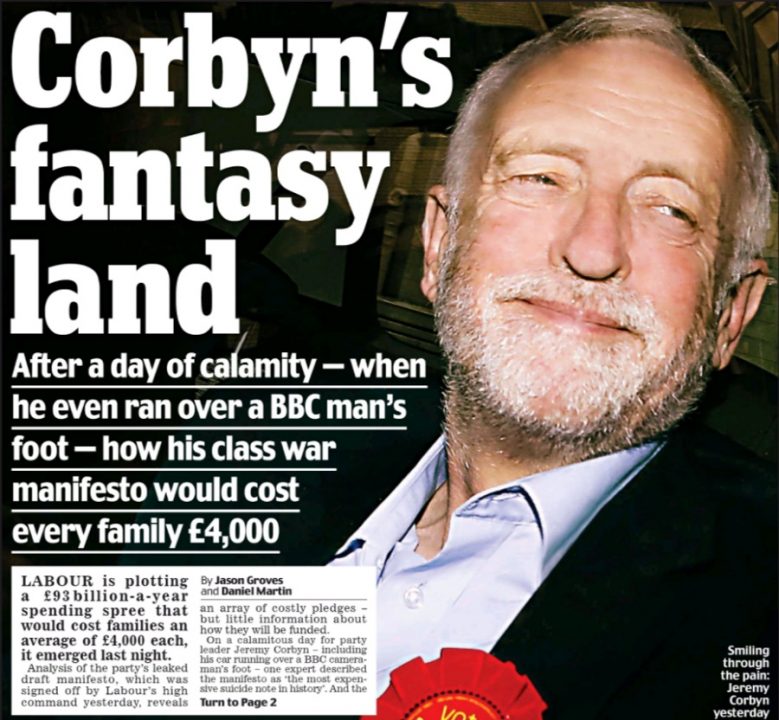 The online version of the article stated:

as former minister describes spending commitments as a ‘letter to Santa’… Analysis of Labour’s leaked draft manifesto reveals an array of costly pledges… Expert described the manifesto as ‘the most expensive suicide note in history’… It has emerged that Labour’s spending spree would cost families £4,000 each…

But it detailed in the first paragraph that, actually, the £4,000 figure was an “average”, based on the manifesto’s “£93 billion-a-year spending spree”. And some Labour supporters weren’t happy. So as The Press Gazette reported, one man – Rob Watkins – complained to the Independent Press Standards Organisation (IPSO).

The Daily Mail, however, disagreed – arguing that it hadn’t breached any regulatory code because:

But the IPSO thought differently and intervened, starting an investigation. But before it could rule on whether the tabloid had breached its code, The Daily Mail agreed to publish a clarification. So on 22 September, nearly four and a half months after the original article, it said on page two of its print edition:

The headline to an article on 12 May, based on a leaked draft of the Labour party’s election manifesto, said that Labour’s ‘class war manifesto would cost every family £4,000’. We are happy to clarify that, as the article stated, the £4,000 was an average figure and did not represent an estimate of the amount Labour was planning to raise in taxes from each family.

At the time, The Daily Mail seemingly chose to ignore the fact that Labour’s manifesto would have meant tax rises for only the top 5% of earners in the UK. And it also ignored the fact that the Conservative manifesto was largely uncosted.

By the time of the ‘clarification’, however, the damage had already been done. With an overall reach of 31 million people a month, the tabloid impacts public opinion. This could be people actively reading it, or stumbling across its headlines on their social media feeds. So for it to casually publish such misleading propaganda just a month before an election is the height of bad journalism. But then, nothing less should be expected from The Daily Mail.