Amid EU silence, Scotland and Wales join condemnation of a chilling ‘attack on democracy’ - Canary 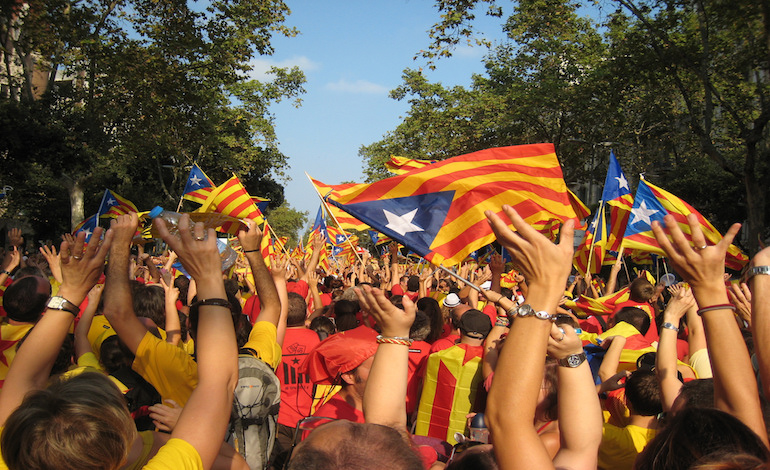 A democratic crisis is unfolding in Catalonia. As the autonomous region in the north east of Spain prepares to vote in the independence referendum organised for 1 October, the Spanish government stands accused of using “force, repression and fear” to suppress the will [Spanish] of the Catalan people. And other nations in Europe, including Scotland and Wales, have joined condemnation of what political figures in Barcelona have called an “attack on democracy”.

The right to decide

Polls suggest [Spanish] that just 41% of Catalan people are pro-independence, and 49% against. But more than 70% of Catalans want to vote [Spanish] in the referendum.

The central Spanish government, however, has repeatedly insisted that it will not take place.

The increasing use of Spanish government force and the rejection of dialogue has resulted in mass protests [Spanish] across Catalonia. 20,000 [Spanish] protesters in Bilbao also recently marched in solidarity with the Catalan cause. Supporters have also organised [Spanish] pro-referendum protests in Madrid, Valencia, Galicia and elsewhere across Spain.

The Spanish government’s argument [paywall] is that any attempt to break away directly contravenes the 1978 Spanish constitution, which Catalonia unanimously voted in favour of. But Spain was in the process of leaving a brutal 36-year-long dictatorship behind when the country voted in favour of the constitution; and, before the dictatorship, a civil war from 1936 to 1939 that led to 500,000 deaths. So the constitution was the first chance since 1936 that Spain had for democracy.

The official EU stance is that this crisis is an internal matter, and that it will not get involved. A European Commission spokesperson, for example, has said: “we must respect the constitutional order and the legal framework of each member state”.

But the recent raids and arrests have led to an international outcry. Members of the Welsh Assembly, for example, have called for solidarity with Catalonia. And Scotland has officially backed the Catalan people’s right to vote in an independence referendum. Scottish First Minister Nicola Sturgeon said:

what I think is of concern anywhere is for a state to deny the right of a people to democratically express their will.

The right of self-determination is an important international principle and I hope very much it will be respected in Catalonia and everywhere else.

Further afield, a group of Danish MPs wrote a strongly-worded letter to the Spanish government, highlighting the need for dialogue. Yet the EU remains impassive.

An attack on liberty

The Spanish government ordered the national police force to storm the regional government’s offices on 20 September. This operation led the police to arrest 14 high-ranking officials linked to the organisation of the referendum, raid the homes of Catalan separatists, and seize ballot papers. The arrests in particular have provoked [Spanish] massive spontaneous and organised protests in the city of Barcelona.

Speaking to The Canary, the Office of the Mayor of Barcelona responded to the police actions by saying:

But we will mobilise ourselves with determination. We’ll protest on the streets. We will stand in solidarity with everyone who supports us from across Spain.

An unstoppable force hurtling towards an immovable object

Daily protests, meanwhile, are almost a certainty until 1 October. And they have already turned to riots and violent clashes between police and civilians.

This does not mean that the regional Catalan government has been a completely innocent party, though. Many Catalans believe that, while the Spanish government’s actions are inexcusable, the regional government has manipulated [Spanish] people into voting for independence. Prominent Catalan author Rosa Regàs, for example, has said [Spanish] that “in Catalonia everything is manipulated”, referring to the regional government’s pro-independence strategy. And she and others have criticised pro-independence politicians on the right for their record of austerity and privatisations.

Whatever happens, the Spanish government’s escalating use of force and intimidation – along with the EU’s refusal to condemn Spain’s actions – could set a worrying precedent for other countries in Europe.