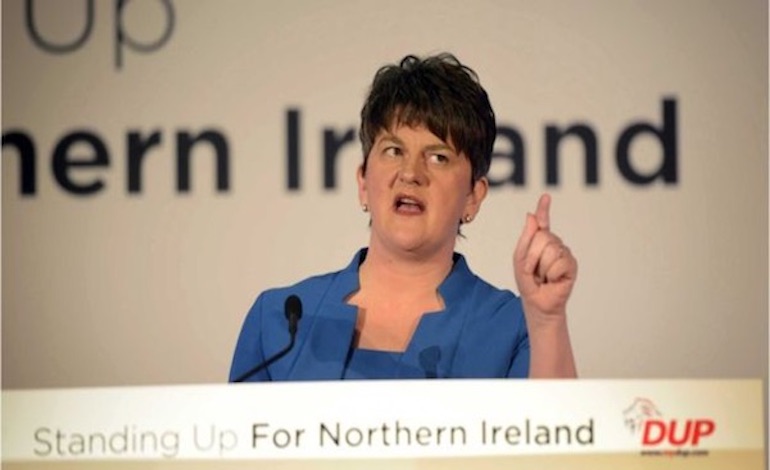 Former First Minister of Northern Ireland Arlene Foster could appear in an Irish court over claims she blocked inquest funding for ‘politically motivated’ reasons. All political parties, including Foster’s DUP, had previously agreed to establish inquiries into unresolved past crimes. The DUP is currently propping up the Conservative government in the UK, under a ‘confidence and supply’ agreement.

Brigid Hughes has brought this new judicial review to court. The case comes in response to the failure of Northern Ireland’s Stormont government to request that the UK releases funding for the 44 outstanding legacy inquests. At Belfast High Court on September 27, Justice Paul Girvan added Foster to the list of respondents for the proceedings.

Hughes was left widowed after her husband Anthony, an innocent bystander, was killed in an SAS ambush on the IRA in County Armagh in 1987. Anthony and his brother Oliver were returning home from work at the time. They were unwittingly caught up in the ambush and shot by SAS soldiers. Oliver survived but suffered serious injuries.

Funding needed for the legacy inquests is estimated at £10 million. The British government has said that the funds will be released subject to a formal request from the Northern Ireland government. But before the recent collapse of the power-sharing government in Northern Ireland, Foster refused to issue such a request.

Speaking in 2014 about her struggle for justice, Hughes said:

For 27 years we have waited for the British Government to admit that my Anthony and his brother Oliver were totally innocent of any wrongdoing. They tried to blame my Anthony for being shot…..My three wee girls had to grow up without a daddy. I lost my husband and all these years they have tried to say that Anthony was in the wrong.

According to The Tyrone Times, media reports suggested that the two brothers were to blame for their own deaths. But the British government did issue an apology to the family after the SAS sought to justify their actions.

When Foster was a teenager, she herself survived an explosion on her school bus in 1988. No one has been prosecuted for the attack to date. Her father, a former Royal Ulster Constabulary policeman, survived an attempt on his life. Speaking about the killings during the Troubles, Foster said:

Victims sometimes struggle with some of the legacy issues. What one victim wants, another victim doesn’t want. They want something completely different, and it is about trying to find a structure that deals with all that.

Speaking about Foster’s refusal to sign off the funding request, Hughes’ barrister said:

The UK government’s kingmaker in court

If you’re presenting your case as a personal attack on her [Foster] as former first minister, I don’t think it would be fair to proceed without making her a party to proceedings and having legal representation.

The case is scheduled for a hearing on 27 November. And should Foster appear, it is difficult to envisage her giving a credible justification for her decision; she previously agreed to address unresolved past crime cases but then blocked the release of funding. She was a victim of the Troubles herself but she then impeded the legacy inquests.