Owen Jones has kickstarted a quiet revolution. And it's promising to sweep the country [VIDEO] - Canary 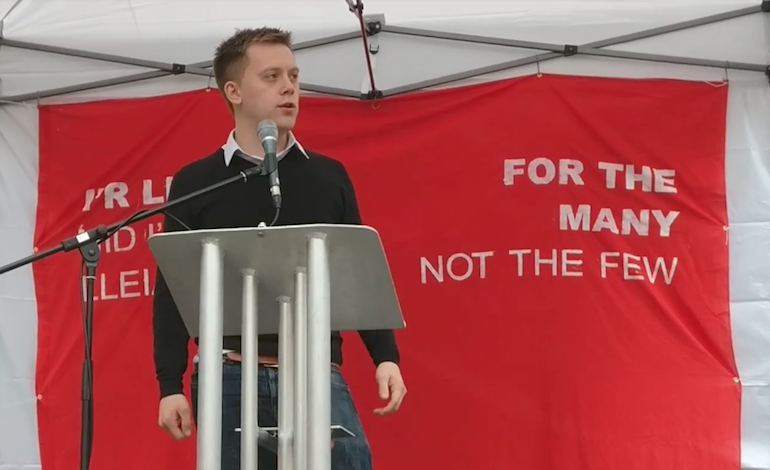 Writer and activist Owen Jones has a plan. Together with Momentum, he’s spearheading a campaign to unseat eight of the most high-profile Conservative MPs in the next general election. And on 14 October, the campaign arrived in Haverfordwest in south-west Wales to unseat Conservative MP Stephen Crabb.

The MPs targeted by the Unseat campaign have three things in common. They are all Conservatives. They are all high-profile – counting, for example, Home Secretary Amber Rudd and Foreign Secretary Boris Johnson among their number. And they all had their majorities slashed in the 2017 general election.

Preseli Pembrokeshire has been Conservative since Crabb was first elected to parliament in 2005. In 2015, he held the seat with a majority of almost 5,000. By 2017, that majority had crashed to just 314. And now a remarkable cross-party alliance is working together to unseat Crabb once and for all.

For many, Crabb symbolises the worst of the Conservatives’ austerity agenda. Jim Scott from the People’s Assembly in Pembrokeshire told The Canary that the former Work and Pensions Secretary:

is now universally disliked across the political spectrum: a ‘disability patron’ that votes for cuts to disabled people’s support at every opportunity he gets, Crabb’s hypocrisy clearly knows no bounds.

But the rally in Haverfordwest’s Castle Square will have repercussions beyond Crabb’s constituency. Because it was about more than just unseating one MP. It was about a movement that is spreading across the country.

The day began with training, led by Owen Jones, followed by mass canvassing in the constituency:

It was followed by a rally in Haverfordwest’s Castle Square:

As well as Jones, speakers included representatives from the Labour Party, the Green Party, unions, campaigning groups including Disabled People Against Cuts (DPAC) and members of civil society. Here are few of the highlights.

Scott of the People’s Assembly in Pembrokeshire, which helped to organise the event, gave some local context:

But now, he said, an “incredible” level of solidarity and cross-party cooperation has developed in Pembrokeshire, all working together to unseat Crabb and “create a fair and decent society”:

Wales Green Party Leader Grenville Ham echoed Scott’s point, explaining that he took a “great deal of pride in the fact that the local Pembrokeshire Green Party stood down in an effort to remove Stephen Crabb”. He went on to explain:

10 years ago, when I was learning to walk again and speak again following an accident, when I was at my most desperate, the DWP [Department for Work and Pensions] told me that they couldn’t understand what I was trying to say, and that I should return for their help only once I could talk properly, once I was better. This failure of our most vulnerable is not a recent phenomenon, it is systematic, entrenched and it must end.

All I ask, whichever party you’re from, remember that none of us have a monopoly on wisdom. But whatever our differences, I think we can all agree that Stephen Crabb must go!

You can hear an excerpt from his speech here:

I think it’s really important that we now work together… That was a fantastic training session that we had this morning. We’ve been out knocking doors and we’ve had a great response already. It is true people know the name of Stephen Crabb, but it’s not in a good way. We need to make sure the people of Pembrokeshire kick Stephen Crabb out… We want Jeremy Corbyn to be Prime Minister of the United Kingdom and we want him to deliver an anti-austerity agenda.

Mark Evans of Unison offered another solution. He told the crowd:

I don’t really need to tell you how bad it is in Tory Britain. I don’t need to tell you that the Tories are clinging on to power by their fingernails. What I would like to talk about is a strategy… forcing the Tories from office. We need a mass movement. And I think one of the ways we could do that is if Labour councils and other councils, like the Plaid-led council in Carmarthenshire, if they stood up and refused to implement cuts, if they borrowed money and used reserves… if a number of councils did that and organised a mass campaign, linking up with the trade unions, that could be the beginning of the end of the Tories.

You can hear an excerpt here:

And local anti-bedroom tax and social justice campaigner Paul Rutherford talked movingly about his journey to the Supreme Court to fight for his right to have a bedroom for his grandson’s carer – a battle he eventually won:

This inspiring guy @PaulRutherford8 took the Tories to court over the Bedroom Tax and won!!! #GetCrabbOut pic.twitter.com/0VkiHNlqNS

Headlining the event was Jones, who began by telling the crowd that today is all “about building a movement from below”. After outlining the impacts of Conservative austerity, he told the crowds:

There is an alternative after all. And what we saw in that election campaign was hope. Hope broke out across this country. That’s why Labour ended up winning seats it’s never won in its entire history. Like the People’s Republic of Kensington. The Socialist Republic of Canterbury. Places that the Tories have in some cases ruled since the nineteenth century. And it just shows that if we have an inspiring message, if we have an inspiring alternative, then we can turn things around.

You can watch excerpts from his speech here:

A wave of optimism

In the run-up to the 2017 general election, the pundits thought Labour was heading for a catastrophic defeat. With Labour HQ running a defensive campaign, trying to protect seats it thought would fall to the Conservatives, it was often left to Momentum activists to campaign in marginal seats. A grassroots movement was underway, and many in the Westminster bubble missed it – until the Conservative Party lost its majority in parliament.

Nobody knows when the next general election will be. But those wanting to kick the Conservatives out and build a new society are ready. Up and down the country, activists are door-knocking, having conversations with their friends and colleagues and keeping up the pressure at a grassroots level.

As I left the rally with my family, we walked past a well-heeled, elderly couple of passers-by who had stopped to see what was going on and caught the end of Jones’s speech. The man turned to the woman and said:

What a wave of optimism. I think they might win.

And anyone who attended the event and saw the passion and determination would be hard-pressed to disagree.

– Get involved with the People’s Assembly Against Austerity.

– Get involved with Momentum.