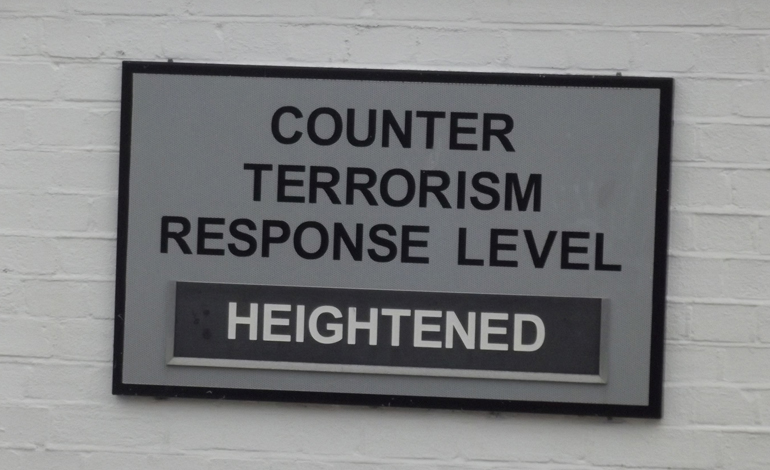 A woman detained at Edinburgh airport says she felt “violated” by the police. Eleanor Jones says she was “interrogated” and had DNA samples taken, though she wasn’t charged. Police used counter-terrorism laws to hold her after Jones was involved in anti-capitalist protests in Germany.

Speaking to The Herald, Jones says she was held for several hours by police as they “interrogated” her about the political views of her and her family. Her laptop and phone were scanned for their contents, and her fingerprints and DNA were recorded. This was conducted under Schedule 7 of the Terrorism Act 2000.

Jones claims this treatment comes after her arrest in Germany while participating in anti-G20 protests in Hamburg on 6 to 8 July. German police accused her of being in ‘anarchist Black Bloc’ actions. But she was released without charge.

The Hamburg arrest was an anti-protest tool, Jones says:

It was decided I would be let go at 10pm that day and I was released without charge since there was nothing to charge me with. … Part of the detention was to stop people protesting. It was to get people off the streets.

But apparently police in Scotland were also interested in her time at the Hamburg protests. Jones was returning from her grandfather’s funeral in Edinburgh when she was met by plain clothes officers with her flight details in hand. And they detained her using Schedule 7. Jones says the police “asked about Hamburg as well”.

‘Overuse and abuse’ in the name of counter-terrorism

Schedule 7 means police can stop, search and hold people at border control areas. This includes international rail stations, ports and airports. Refusing to comply is a criminal offence. Human rights organisation Liberty describes the legislation as a “breathtakingly broad and intrusive” law that is “ripe for overuse and abuse”.

On 25 September Muhammed Rabbani was convicted after refusing to comply with Schedule 7. Rabbani, director of human rights organisation CAGE, chose not to provide passwords to his laptop and iPhone after being detained by police in November 2016. The devices contain sensitive information about an alleged torture victim he is protecting, Rabbani says.

Faizah Shaheen was detained under Schedule 7 because of a book. Returning from Turkey, she was reading Syria Speaks: Art and Culture from the Frontline. The book documents art and literature by Syrian artists. But cabin crew reported her to airport authorities and she was questioned by police.

Former British soldier Robert Clarke was convicted on 4 January for refusing to give up his phone’s PIN. His arrest at Heathrow Airport came as he was catching a flight to join Kurdish forces in Syria fighting against Daesh (ISIS/IS).

On 20 December 2016, anti-fracking activist Ian Crane was also detained at Exeter Airport for two hours during which he was questioned and his phone was searched.

It’s legal but is it justice?

he recognised this would have been a ‘difficult and potentially daunting’ experience for Jones, but said she would not have been subject to an ‘interrogation’… Jones’ wider family are not, and were not, the subject of a Police Scotland enquiry and said the seizure of her mobile phone and laptop, as well as the DNA and fingerprint sampling, were carried out ‘within the bounds of the legislation’.

But Schedule 7’s breadth means there are consistent examples of “overuse and abuse“. Jones’s fingerprints and DNA are now on a police database despite never having committed a crime. She says of the officers that detained her:

When they told me what they claimed to be terrorism they said ‘we call vandalism terrorism’.

A wide gulf exists between vandalism and terrorism. Just as there is between reading a book and terrorism, or protecting torture victims and terrorism. But the step between Schedule 7 and a repressive police force might not be so big.

– Visit PassWithPrivacy to learn more about the problems with Schedule 7.

– Check out StopWatch for more information on disproportionate use of stop and search powers.

– Stay safe with advice about Schedule 7 from Network for Police Monitoring.