Police are treating opponents of fracking as terrorists, this should worry us all - The Canary 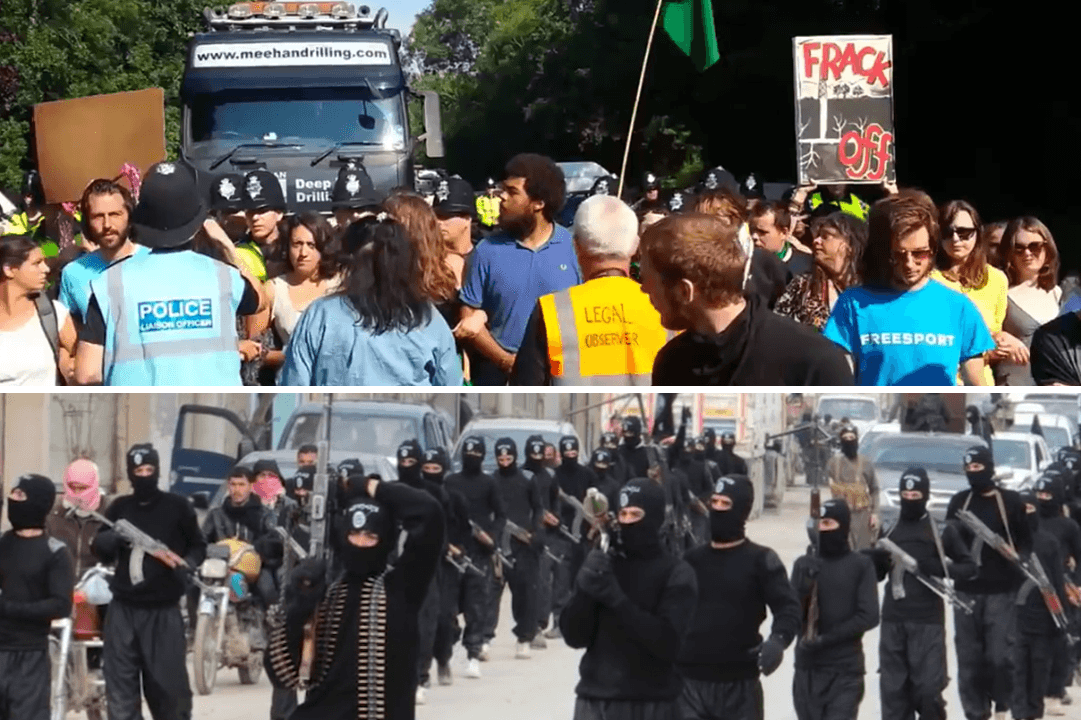 An anti-fracking campaigner has been detained under terrorism legislation by Devon and Cornwall police at Exeter airport.

Ian Crane was detained for two hours under Schedule 7 of the Terrorism Act 2000 after returning from Amsterdam on 20 December last year. Although his luggage was not searched, he reported his phone was taken away and investigated for an hour. Mr Crane further claimed he was asked questions including “where have you been?” and “what have you been doing?” as well as being asked for his opinion on what radicalises people.

Whilst Schedule 7 gives the police the power to detain, search and question anyone “regardless of whether the officer has grounds to suspect that the person is involved in terrorism”, the 2015 Codes of Practice also state the detention should not be “arbitrary”.

Given the police claimed Mr Crane was stopped as a “random check”, there are two only two options. Either the police were lying and it was a targeted stop, or they were breaching their own Codes of Practice. Neither option plays out well for the police. As Mr Crane presents a weekly webcast, Fracking Nightmare, and given the regularity under which activists have been stopped under terrorism legislation, there is little doubt that his detention was politically motivated.

Kevin Blowe from the Network for Police Monitoring (Netpol), who have been campaigning against the use of Schedule 7 on activists and communities, called Mr Crane’s detention “alarming” and further stated:

Although intended to prevent terrorism, we have documented repeated instances of its use against campaigners, often on the basis of what seems like pre-existing intelligence relating to their political activity. Mr Crane’s experience provides more alarming evidence that opponents of fracking are amongst those who are currently targeted as ‘domestic extremists

This isn’t the first time anti fracking activists have been treated as terrorists or violent extremists. An audio recording obtained by Netpol of a Workshop to Raise Awareness of Prevent training (WRAP) – training which is now mandatory for most public sector workers – shows fracking opponents at Barton Moss being described as “violent extremists”. According to the officer giving the training, either protesters obey the letter of the law, or they are violent extremists. As Netpol point out, there is “no middle ground”, and the allegations made at this briefing, of assault against a worker, were based on unfounded accusations.

Furthermore, according to The Ferret, Glasgow City Council’s ‘Protect Against Terrorism’ training contained slides detailing the threat from anti-nuclear, environmental and animal rights protesters. It has been reported that this, and similar content in the WRAP training has been given to over 4000 workers across Scotland.

In response to these findings, Dr Richard Dixon, Director of Friends of the Earth Scotland said:

People will be amazed that Glasgow Council could possibly label ordinary concerned citizens as ‘terrorist threats. This is a gross insult to the many, many people who are concerned about climate change, nuclear weapons or animal rights, and to the charities who campaign peacefully on these issues.

Despite widespread opposition, Cameron and his friends are determined to push forward with fracking. However, as resistance grows, so will the government’s attempts to quash, repress and tarnish their opponents. Protesting against fracking is not a terrorist or extremist activity – and the lengths to which the government are prepared to go in smearing and criminalising their opponents should worry us all.

Featured image via screengrabs from Fabrice Bardsley and Vox