The government has got a plan, that will make flooding even worse - Canary 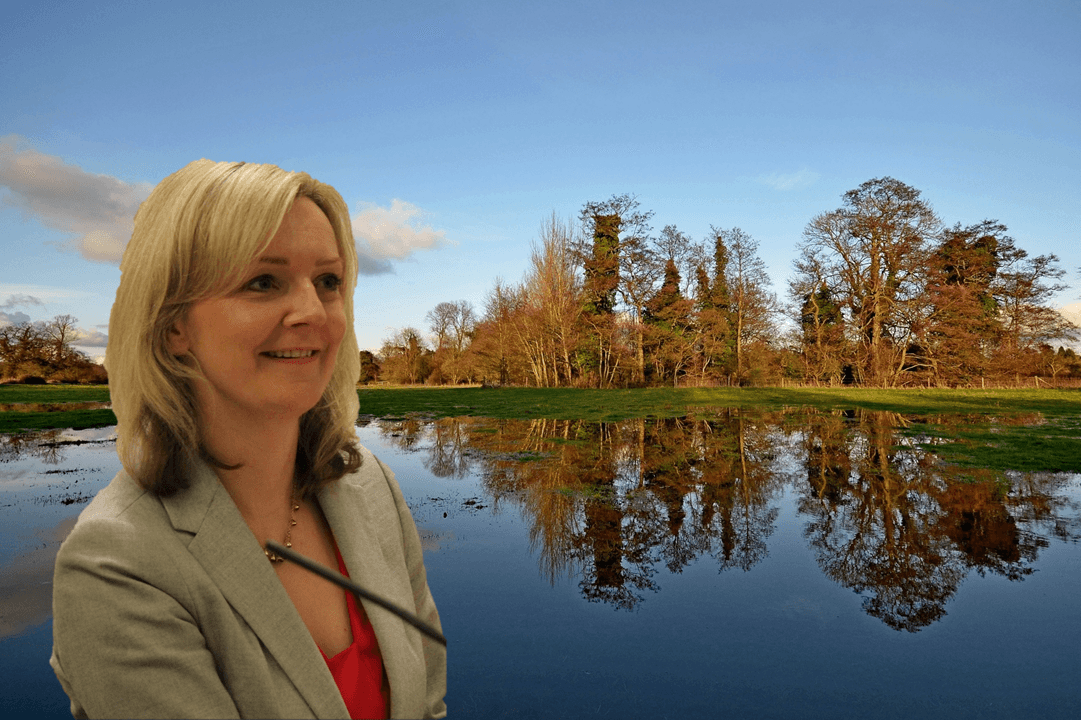 Not only are the Conservatives guilty of slashing funds for flood defences, their blueprint for the countryside is likely to only increase the risk of floods.

We saw just how seriously the current government takes the issue of flooding with the Prime Minister’s abject refusal to deal sensibly with questions about it in parliament. Cameron seems to think he can solve the problem simply by turning up and pointing at it. Of course, with natural disasters such as flooding, prevention is infinitely preferable to cure. But how do you hold back the forces of nature?

Fortunately the government’s farming champion, Liz Truss, has the answer. She announced on 6 January to the Oxford Farming Conference that an additional 1 million acres of farmland would be protected from flooding by 2021. She also declared her intention to decentralise drainage policy, allowing farmers to “manage the land to stop it getting waterlogged”.

George Monbiot has pointed out that, given that water will always accumulate somewhere, this amounts to allowing towns to flood so that farmland can be kept dry. The level of ignorance, for a Secretary of State at the Department for Environment, Food and Rural Affairs (Defra), cannot surely be accidental. Her own department has produced plenty of useful research on river management (not all of which sees the light of day). It does seem that Truss fails to realise that people are joking when they suggest that Defra should stand for Doing Everything Farmers’ Representatives Ask.

Despite the considerable dam to progress represented by Truss, common sense does appear to be flowing slightly more freely elsewhere in parliament. The concentration of this winter’s flooding in the north has seen a renewed focus on the uplands as unprecedented rainfall has flashed off the moors and fells, overwhelming settlements further down the valleys.

Unlike the floods in Somerset two years ago, when the water stood about for weeks, stubbornly refusing to flow uphill to the sea, the worst damage this year has been done by water travelling far too fast. During a commons debate on 6 January there was perhaps more mention than ever before of the need to regulate the flow of water off the land. This leads naturally to investigating the management of river catchments. And in the areas around the flooded northern towns, these are dominated by grouse moors.

For anyone unfamiliar with the peculiarly British (and peculiarly upper crust) pastime of grouse shooting, it involves the intensive management of large swathes of the uplands in order to encourage unnaturally high densities of red grouse. These birds are then driven towards high-paying clients who compete to see who can shoot the most. Everything about the moor is tailored to maximising the number of grouse, so predators are eradicated and the land is drained and often burned, to stimulate young shoots of heather, which the grouse eat.

This drastic treatment of the land makes the ground far less effective at holding water and the consequences are felt downstream. The town of Hebden Bridge has been repeatedly flooded after the nearby Walshaw Moor came under new, more intensive, management.

Kerry McCarthy, the refreshingly free-thinking shadow environment secretary, has been unafraid to hold the grouse moor management accountable for at least an element of the floods. Tories such as Rory Stewart and Richard Benyon have at least acknowledged the role of the uplands, while stopping short of mentioning shooting.

The bad news is that the government has raised the subsidy paid to grouse moor owners while doing next to nothing to enforce any sort of good practice. The good news is that public disquiet seems at last to be encouraging some politicians, even among the Tories (although not yet Liz Truss), to think more intelligently about how we can deal with extreme rainfall in the future.

As grouse shooting benefits hardly anyone, whilst potentially endangering entire communities, you might feel it should be consigned to history. Here’s a petition.