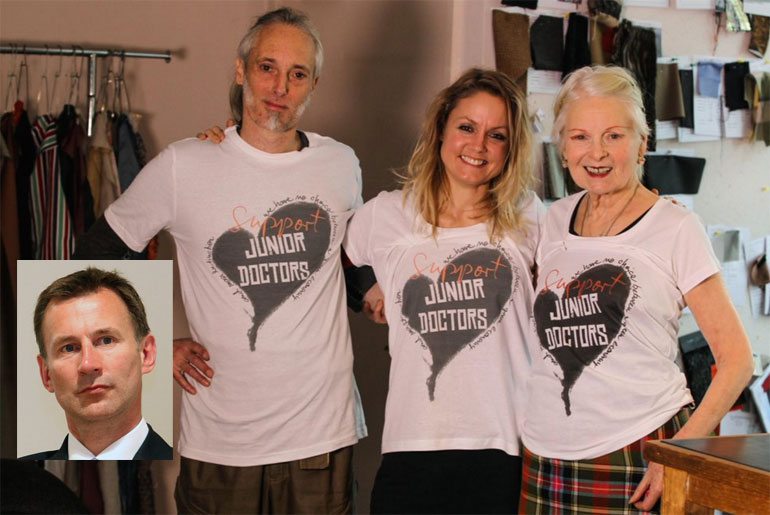 The standard technique of privatisation, Noam Chomsky once said, is to “defund, make sure things don’t work, people get angry, you hand it over to private capital.” But health secretary Jeremy Hunt’s attempts to undermine public confidence in the NHS and its workers – particularly its junior doctors – appear to be failing. As they prepare to take the first mass strike action by doctors in Britain for 40 years on Tuesday, England’s junior doctors are being met not with anger, but with outpourings of support.

Healthcare professionals have been near unanimous in their support for junior doctors in the run-up to the strike; a Guardian poll found that a staggering 95% of them support strike action. This week, thousands of NHS staff – from paramedics, nurses and care support workers to porters, medical scientists and secretaries – pledged their support in a letter published in The Independent:

We stand by them in solidarity at a time when they feel they have no choice but to take industrial action. We too believe that industrial action is the only option now in order to protect our patients first and foremost from an unsafe contract that will see the junior doctors even more exhausted and demoralised than they already are.

Senior doctors also appear to overwhelmingly support the junior doctors in their dispute with Jeremy Hunt. Back in November, when junior doctors were balloted on strike action, over 500 consultants from a single NHS Foundation Trust wrote:

We would like to express our complete support to you in the context of the ongoing Junior Doctor contract debate between the BMA and the Secretary of State for Health… We acknowledge that you are committed and dedicated to our patients and the NHS and that you already work on 24/7 rotas to deliver frontline care. We hope this letter from us gives you confidence that your consultants support the decisions you are compelled towards, to secure a fair and safe junior doctor contract. We will work to minimise the risks to our patients in the eventuality that brief, extended or repeated industrial action is called for.

Consultants in the television series 24 Hours in A&E also pledged to cover for striking colleagues:

Now that strike action looks all but inevitable, consultants and senior doctors are again speaking out in support:

NHS work force is 100% behind planned industrial action by #JuniorDoctors. To show your solidarity RT!@TheBMA

In fact, one of the very few senior medics to have publicly opposed industrial action is Professor Sir Bruce Keogh, the Medical Director of NHS England, who wrote a letter stoking fears about public safety in the event of the strikes after the Paris terror attacks. But that letter turned out to be the result of political meddling; Department of Health officials were closely involved in the drafting of it, and in the timing of its publication.

If support from the healthcare profession has been near unanimous, so has support from Britain’s celebrities. I have failed to find a single example of a celebrity speaking out against junior doctors, but countless public figures have supported them – including Michael Sheen, Peter Capaldi, Robert Lindsay, Rufus Hound, Sadie Frost, Martin Freeman and JK Rowling:

Designer Vivienne Westwood really supports them. She even designed a T-shirt:

Ultimately though, the success – or failure – of the strike will rest on how much support it can win from the general public.

Here, the signs are also positive. Doctors report being “blown away” and “overwhelmed” by public support when they take to the streets. And in the vast majority of online polls and discussions, junior doctors have come out well ahead of the government – even if the context is framed in terms of patient safety.

The people replying to this question from by ITV News, for example, almost unanimously sided with the strikers against Jeremy Hunt:

@itvnews Hunt trying to alarm public & turn us against NHS. I'm worried for physical & mental health of our Drs when put under such strain

Although junior doctors shouldn’t get complacent:

To #juniordoctors -a few Daily Mail readers don't approve of u going on strike and have sent me some indignant tweets so, um… carry on! 😂😘

If the wider public is supporting junior doctors, it is because we sense – and doctors know – that the strike is not about pay, or even solely about safety: it’s about the future of the NHS.

Years of austerity have brought the NHS from its highest ever approval rating in 2011 to the brink of collapse in 2016. It is being squeezed as never before. Hospitals are being forced to take out loans just to pay wages. Exhaustion and psychological distress are pushing doctors to suicide. And over a third of students no longer want to study medicine.

As a recent appeal for support for the junior doctors’ strike action put it:

The politics of austerity represents a clear and present danger to the nation’s health. A victory for the Junior Doctors would signify the first real crack in the entire edifice of austerity in the UK.

That same appeal invites us all to support junior doctors by attending the pickets, which are planned for all major hospitals in England on 12 January, 26 January and 10 February. You can find more details here.