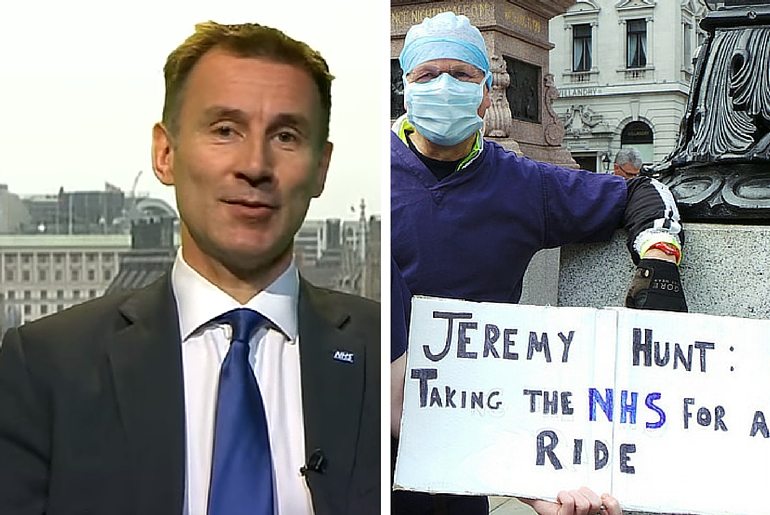 The Department of Health (DH), headed by Jeremy Hunt, has been accused of editing a letter which uses the threat of terrorism to oppose strike action. The document referred to the Paris attacks to question how the NHS would respond if similar events occurred in the UK while the institution was left short-staffed by striking junior doctors.

The decision by junior doctors to strike follows Hunt’s failed attempts to put a positive spin on his plans to make junior doctors work even longer hours for less pay. This decision by Hunt risks damaging both medics and patients. And because the minister has been unwilling to come to a satisfactory compromise, junior doctors have been forced to take industrial action.

In 2009, Jeremy Hunt called for the NHS to be abolished, claiming it was “no longer relevant”. It, therefore, came as no surprise that his 2012 appointment as health secretary had a devastating effect on the NHS.

In 2014, Dr Éoin Clarke highlighted at his Green Benches blog 100 failures of Jeremy Hunt. Among these were 52,000 people being rejected treatment due to the costs in just one year, Hunt overseeing one of the lowest doctor-to-population rates in the EU and the longest A&E waiting times in years, £12bn of NHS contracts being awarded to private corporations, and blood plasma services being sold to a US hedge fund.

And now Hunt is determined to politicise the Paris attacks for his own purpose.

According to the Independent, the DH and the medical director of independent body NHS England, Sir Bruce Keogh, had sent emails to one another trying to make Keogh’s letter, which opposed the actions taken by junior doctors, as “hard-edged” as possible.

A DH official said that a “major incident” would be:

pressed quite hard in the media once the strike is formally announced.

Keogh, who is meant to be independent, was then advised:

the more hard-edged you can be on this, the better.

The letter was amended by the DH to ask if junior doctors would be able to get to a hospital if a “major incident” occurred. It was sent within a week of the Paris attacks and published the day it was announced that junior doctors would strike, even though this industrial action was called off at the last minute. But before the letter was sent, a sentence constructed by a DH official was added, stating:

I believe the best way to ensure patient safety is for the planned action not to take place.

What’s worse is that the supposedly independent medical director of NHS England decided to seek assurances directly from Jeremy Hunt just before sending the letter off to the Chair of Council at the British Medical Association:

I am sure then that JH [Jeremy Hunt] will be interested to see the proposed final product; my hope is that if you are happy to make these changes we will be able to get him over the line.

Understandably, this behaviour has caused concern for many who are uncomfortable with the fact that the DH had so much input and even substantially changed a letter from an independent body. A spokesman for the Labour party has said:

This raises a number of serious questions about the conduct of Department of Health officials and Jeremy Hunt.

When the priority is finding a resolution to the dispute the last thing we need to see is ministers and their advisors playing politics with patient care.

This whole affair places into doubt the independence of Bruce Keogh, who seems willing to take the government’s official position and even ask it to help him write his letters. It also shows the level that Jeremy Hunt is willing to go to – using something as devastating as the Paris attacks for his own political gain.