A homeless man sits shivering on train, what happens next is wonderful (VIDEO) - Canary 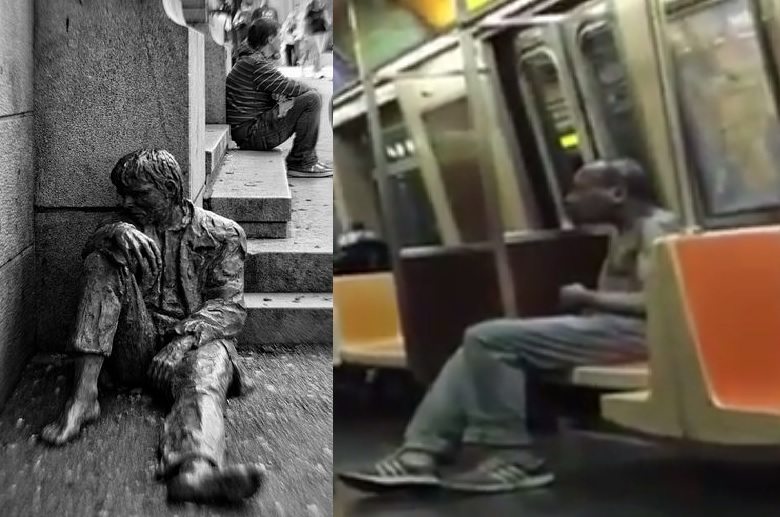 An act of kindness on the New York subway has touched the hearts of millions around the world. On Friday 8 January, a video appeared on Facebook showing a man stripping off his shirt and helping to put it on a bare-chested, seemingly homeless man on the train. He also gives the man his hat. The encounter was filmed by Lazaro Nolasco, a fellow traveller on the train, and has reportedly been viewed more than nine million times.

As the chill of winter starts to set in, dangers for the homeless increase substantially, and they are not limited to one side of the Atlantic. On 8 January, a homeless woman was found dead in a doorway in Wolverhampton, West Midlands. Following the incident, BBC Midlands Today reported:

Unfortunately, however, while citizens are being advised to look out for the homeless as temperatures plummet, David Cameron seems to be doing everything in his power to ensure that protecting these vulnerable citizens is impossible.

Homelessness has risen substantially under the Conservatives. Last year, figures showed a 55% rise in England since 2010, and the number of rough sleepers in London has doubled in the last five years. Sadiq Khan, Labour’s London mayoral candidate, has identified the cause of this significant increase. He told The Guardian:

The rise in homelessness has been caused by a toxic mix of government failures: allowing London’s housing crisis to go from bad to worse with fewer genuinely affordable properties available every year, cuts to social care and local authority funding which means there is less support for people who are at immediate risk of becoming homeless, and direct cuts to grants and programmes for organisations that tackle homelessness. Taken together it’s had a devastating effect.

The housing crisis and lack of social housing are obviously driving factors in the increase in homelessness, as Khan notes. Despite this, the UK government is pushing ahead with the flawed Housing and Planning Bill, which includes plans to demolish thousands of council homes. When questioned on The Andrew Marr Show about whether these “demolished” estates will be replaced with social housing units, Cameron was typically Machiavellian:

However, others have provided startling clarity on the purpose of the plans. As journalist Claire Bolderson notes:

what the Prime Minister’s proposing isn’t a coherent social policy aimed at fixing a deep-seated and complex housing crisis. No. It’s a moral crusade against social housing.

Cameron knows full well the impact his “crusade” will have on the most vulnerable in society. He is also surely aware of the successful examples of tackling homelessness in other parts of the world, where the problem has been completely eradicated. But, he seems not to care about those sleeping on our streets. Thankfully, as the video above proves, the same is not always true for ordinary citizens.