Death toll rises in starving town of Madaya, caught between the government and the rebels (VIDEO) - Canary Workers’ Co-op 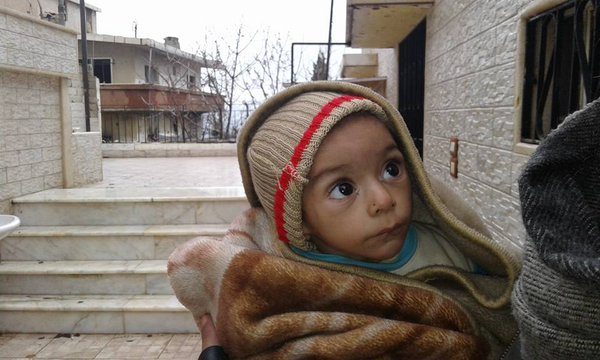 The besieged Syrian town of Madaya received its first aid convoy in months on Monday 11 January, after stunning images depicting an emaciated population on the verge of complete starvation prompted the UN to demand ‘unimpeded humanitarian access’ for aid convoys.

The town has been under siege from government forces since July, and no aid has reached the civilians living in the mountainous suburb of Damascus since before the winter. Both the besieging Syrian military and the rebels within the village are to blame for this humanitarian catastrophe.

According to RT’s Murad Gazdiev, reporting from Madaya:

The last time food reached Madaya was on 27 November last year, when the Syrian government sent about 40 tonnes of food into the town. Apparently, from what we’ve heard, 600 rebels took much of this food, saying it was for their wartime needs.

According to a local we spoke to here, they are now selling their stockpiles to the locals at very high prices. They’re apparently selling rice at about 30$/kg.

There’s a lot of hope that now, with this new food that’s going in, and with how much media coverage there is, that the rebels will let the food go to civilians instead.

This account appears to be confirmed by the video of an 89-year old resident of Madaya blaming the rebels for stealing the food and selling it on at much higher prices.

28 people have so far died of starvation in Madaya, including 6 children. The humanitarian organisation Doctors Without Borders (MSF), that runs a clinic in the town, estimates that a further 200 people could end up in critical conditions if more aid doesn’t arrive soon.

In the last week, many Western parties in the conflict have focused their attention on the blockade of Madaya, calling for an immediate end to the siege ahead of peace talks on 25 January. However, the situation in Madaya is just the tip of the iceberg. According to Philip Luther, Middle East and North Africa Director at Amnesty International:

Syrians are suffering and dying across the country because starvation is being used as a weapon of war by both the Syrian government and armed groups.

By continuing to impose sieges on civilian areas and only sporadically allowing in aid at their whim they are fuelling a humanitarian crisis and toying with the lives of hundreds of thousands of people.

Monday’s convoy is part of a coordinated operation to deliver aid to three towns: Madaya, near the Lebanese border, and Fua and Kefraya, both on the outskirts of Idlib, several hundred miles to the North. Madaya is a Sunni-inhabited town under siege from government forces, and Fua and Kefraya are Shia-inhabited towns under siege from a coalition of rebel forces with links to Al-Qaeda,

Mass starvation has become a common military strategy for years now, used by all sides as a way of forcing civilians into submission. According to the most recent UN press release:

Up to 4.5 million people in Syria live in hard-to-reach areas including nearly 400,000 people in 15 besieged locations who do not have access to the life-saving aid they urgently need.

As the Syrian civil war enters its fifth year, the situation for civilians trapped in cities across the country has reached breaking point, and international observers seem to be completely powerless.

The unconditional right to humanitarian aid is enshrined in international law, and yet in the last year only 10% of all requests for UN humanitarian convoys were accepted and delivered. If there is to be a political settlement to the civil war, all parties in the conflict must come to an agreement and allow aid to reach civilian areas as an absolute priority.

On 25 January, all the major Syrian parties will meet in Geneva for another round of peace talks. With all the various webs of contradicting alliances and interests, it seems unlikely that a definitive agreement will be reached. However, the coordinated delivery of emergency aid that took place on 11 January could be a promising step towards a concerted humanitarian response to the civil war. Over the last five years, the war has displaced 4.3 million people, and claimed the lives of more than 100.000 civilians. The international community should do whatever it can to eliminate starvation as one of the causes.