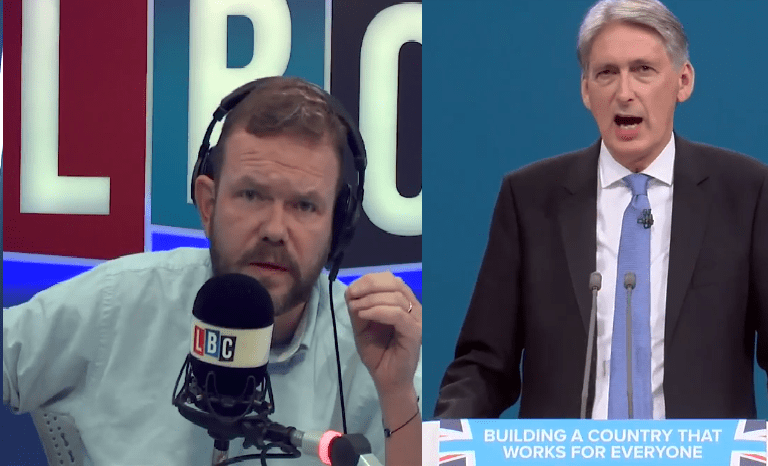 At the Conservative Party Conference, the Chancellor attacked Jeremy Corbyn for “abandoning market economics”. But O’Brien points out that such a line of attack may well backfire. Because Corbyn’s desire for fundamental change is the main reason he has so much support, O’Brien argues.

In fact, Corbyn responded by saying that Hammond is right to claim that Labour is threatening to destroy the current neoliberal economic model.

Branding the exchange “the fulcrum of British politics at this point in time”, O’Brien said:

Hammond thinks he’s attacking Corbyn. But O’Brien points out that the Chancellor is merely reinforcing the Labour leader’s message of systemic change.

‘The media doesn’t get it’

O’Brien went on to say that the economy isn’t working for many people. Living standards fell by 10.4% from 2007 to 2015, for example. So for O’Brien, it’s no wonder a Labour leader campaigning for fresh economic thinking has huge support. He said:

If you don’t actually think that having capital is in your future, what’s the point of anything in a capitalist society?

A lot of it boils down to an “intergenerational” gap, O’Brien claims. But the LBC presenter says the mainstream media just “doesn’t get it”. And his reason for that is simple:

the media doesn’t get it because, well, they’re all old.

‘The rise of the robots’

In his speech at the Cooperative Party Conference, Corbyn also spoke of the economy of the future. The Labour leader pointed to ways we could avoid an automated dystopian monopoly controlled by big business:

higher minimum wages, a shorter working week, profit sharing schemes, or putting the ownership and control of the robots in the hands of those who work with them and come to rely on them.

35% of UK jobs could be automated within 20 years. And it’s unclear how Hammond’s free market economy would respond. Already, the neoliberal economic orthodoxy is transferring wealth from the already poor to the already rich. Public support for this system is falling fast.

Yet Hammond is trying to attack Corbyn for wanting to fundamentally break with the orthodoxy. O’Brien points out the irony: the Chancellor is only amplifying Corbyn’s message of real change.