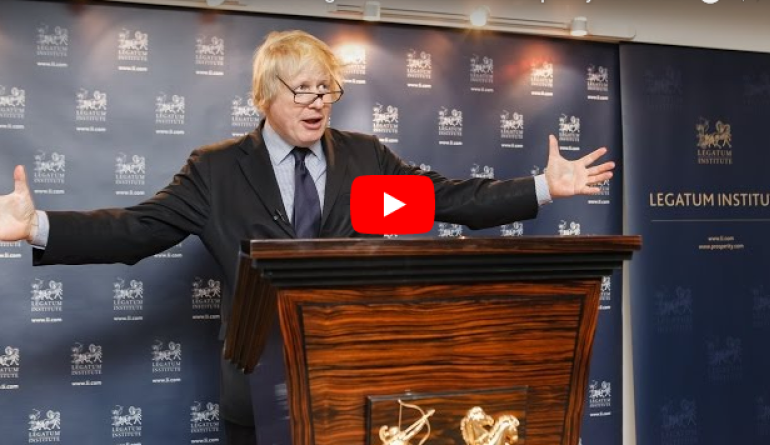 Labour leader Jeremy Corbyn once accused the Theresa May government of seeking a post-Brexit Britain akin to an offshore tax haven, with minimal workers’ rights. But an alliance between ultra-Brexiteers and neoliberals is determined that this scenario becomes reality. Which could explain why some leading figures in government are now promoting a ‘no deal’ Brexit as the only option.

Despite, that is, dire warnings from the Organisation for Economic Co-operation and Development (OECD) that Britain will need to reverse Brexit or face complete disaster.

The behind-the-scenes policy driver in the push for hard or ‘no deal’ Brexit is an organisation called Legatum. The Legatum Group has an office in London and main offices in Dubai. Its parent company is the Legatum Institute, which is registered in the Cayman Islands. The institute receives [pdf] most of its income from Legatum Foundation Limited, which is registered in Bermuda.

So it seems all is going to plan.

But that was just the beginning. The Legatum Institute now boasts that it is advising the British government via its Special Trade Commission on Brexit. It also has ties with leading Tories:

Shanker Singham, the Legatum Institute’s Director of Economic Policy, has advised Brexit minister David Davis and Trade minister Liam Fox and is a regular attendee of Department for Exiting the EU (DExEU) meetings:

The Legatum Institute also counted on the support of Brexiteer Boris Johnson, now Britain’s Foreign Secretary. For when he was mayor of London, he helped launch one of their campaigns:

The wider links and ‘dark money’

In September 2016, then head of the European Research Group (ERG) Steve Baker MP led a discussion at a Legatum event. The ERG is a pro-Brexit lobby group, whose members/supporters include leading Brexiteers such as MPs Jacob Rees-Mogg, Sajid Javid, Chris Grayling, Leadsom and Fox.

According to Open Democracy, the ERG received over a quarter of a million pounds from MPs, who claimed that money via their official expenses. In other words, from unwitting taxpayers.

Baker also accepted a donation from the Constitutional Research Council, which channelled £435,000 of ‘dark money’ to the Democratic Unionist Party (Northern Ireland) to campaign for Brexit.

Baker is now a minister in the Department for Exiting the EU.

Meanwhile, the OECD has released a report that recommends Britain remains in the EU:

In case Brexit gets reversed by political decision (change of majority, new referendum, etc), the positive impact on growth would be significant.

The OECD added that, if Brexit proceeds, it would:

cause a severe negative shock to the economy and weaken GDP growth for many years, equivalent to a cost per household of GBP 3200 per year by 2030 at today’s prices, and as much as GBP 5000 in the worst case scenario.

And another study has found that a ‘no deal’ Brexit would see tariffs on dairy products increase by 45%, meat products by 37%, and clothing, footwear, drink and tobacco by 10%.

Also, a leading investment bank predicted that Brexit is likely to cause a massive recession in the UK. Especially in the event of a ‘no deal’, the very outcome Legatum and its Tory chums advocate.

Indeed, it was not long after the 2016 EU referendum that one commentator observed how the Conservatives appeared to be adopting tactics akin to ‘disaster capitalism‘. And that with Brexit:

the prize is the opportunity to rework an almost infinite range of detailed arrangements both inside and outside the UK, to redraw at breakneck speed the legal framework that will govern all aspects of our lives.

May has begun to prepare the public for this. And according to Joe Owen of the Institute for Government, the civil service drew up plans for a ‘no deal’ “months ago”. Though, given the close links between the Tories and Legatum, such a scenario may have been the plan all along.

Or to put it another way: extreme Tory Brexit looks as if it could mean exploitation of the many, for the benefit of the few.