First the Foreign Secretary. Then the Chancellor. Now the Home Secretary’s piled into the cabinet bust-up. - Canary 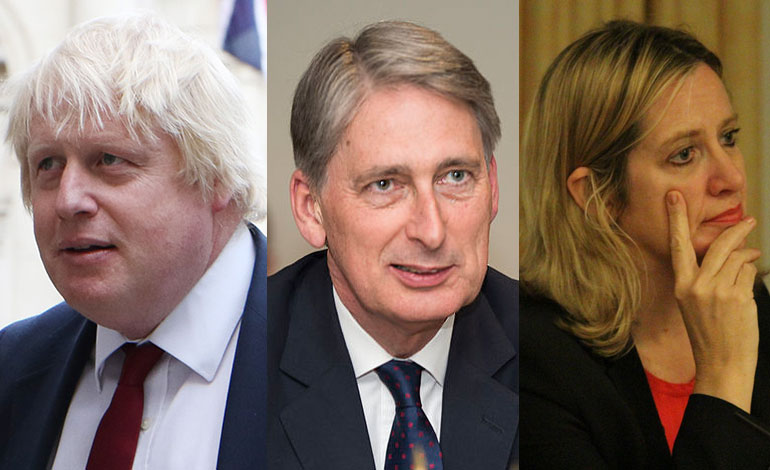 Prime Minister Theresa May has struggled to hold her party together over Brexit. She has suffered attacks from Foreign Secretary Boris Johnson and Chancellor Phillip Hammond. As she tries to hide the split in her cabinet, now Home Secretary Amber Rudd has ripped it wide open.

The most recent spate of Tory infighting began on 9 October, when May announced a Brexit White Paper in the Commons. She spoke of the possibility of a ‘no deal’ scenario and said:

While I believe it is profoundly in all our interests for the negotiations to succeed, it is also our responsibility as a government to prepare for every eventuality. So that is exactly what we are doing. These white papers also support that work, including setting out steps to minimise disruption for businesses…

This provoked Hammond to openly contradict her in a Times article shortly afterwards. Now, Home Secretary Rudd has stated her disapproval. Speaking to the Commons Home Affairs select committee, Rudd was asked about plans for a no deal scenario. Her reply was stark:

I think it is unthinkable there would be no deal. It is so much in their interests as well as ours – in their communities’, families’, tourists’ interests to have something in place.

A party split down the middle

While Rudd, Hammond and various others contest the PM’s statements on a ‘no deal’ situation, other Conservatives support them. Brexit Secretary David Davis has made repeated statements promoting this outcome. Leadership hopeful Jacob Rees-Mogg suggested walking away from negotiations “without paying them a brass farthing”. This is reflective of the history of the Conservative Party, which has been divided over Europe since the 19th century.

As a result, several figures, including Irish Taoiseach (PM) Leo Varadkar, have pointed out the confusion in the Tories’ negotiating position. He said:

It’s still not clear what the UK actually wants in terms of a new relationship, because on the one hand it seems that the UK wants to have a close trading relationship with Europe like it has now, but it also seems to want something different.

As May falters, her party is pulling apart. And it seems they don’t even know themselves what Brexit should look like.