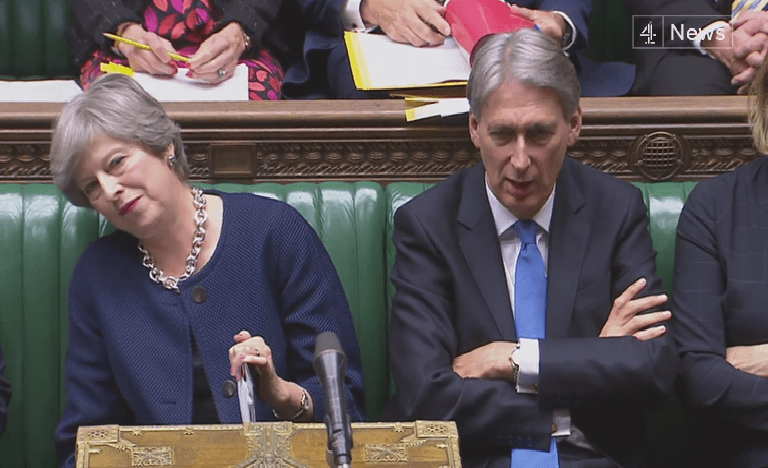 This is Corbyn's best #PMQs since he became leader in 2015. Rammed home UniCredit hotline victory, lots of adlibs, stuck to fundamentals.

It’s obvious why even Westminster journalists are swooning over Corbyn. In the Commons, the Labour leader anticipated a key line of attack from Theresa May.

The Prime Minister tried [15:34] to blame the last Labour government for the debt of young people, saying:

the deficit that the Labour government left us was unsustainable… there’s one thing we know, and that is we shouldn’t be racking up debts today like Labour propose that those young people would have to pay off tomorrow.

But Corbyn knew such evasion tactics were coming. And he had [16:26] quotes from a former Conservative chancellor ready:

It’s very interesting that she talks about what happened ten years ago. Her former friend George Osborne said earlier this week, ‘Did Gordon Brown cause the sub-prime crisis in America? No’. He went on to say, ‘Broadly speaking, the government did what was necessary in a difficult situation’.

The Conservatives were actually proposing similar policies to the Labour leadership at the time. When Osborne made the admission, he was speaking to the BBC‘s Andrew Neil. Neil set [1:07] another record straight:

As Shadow Chancellor, you had promised to match Labour’s spending plans… so there was no difference between the two front benches on this. And indeed you and many Tories were calling for even lighter regulation of the banks. So in a sense, both political parties were singing from the same song sheet, and complicit in the conditions that helped to create the crash.

In 2007, the Conservative leadership attacked the Labour government for saying some regulation was “necessary”. In the same year, Osborne also vowed to “adopt” Labour’s spending plans. By contrast, Corbyn was a backbencher at the time and very critical of his own party’s banking deregulation.

Ten years later, and Corbyn is closing in on May’s evasion tactics with quotes from a former Tory chancellor. The Labour leader provoked quite a reaction:

'Labour's great recession' a lie Tories tell about a crisis of capitalism so they can destroy the welfare state. Never forget that. #pmqs

No wonder Corbyn’s performance has been hailed as a huge victory. PMQs resembled a game of cat and mouse. And there was no way out for the Prime Minister.