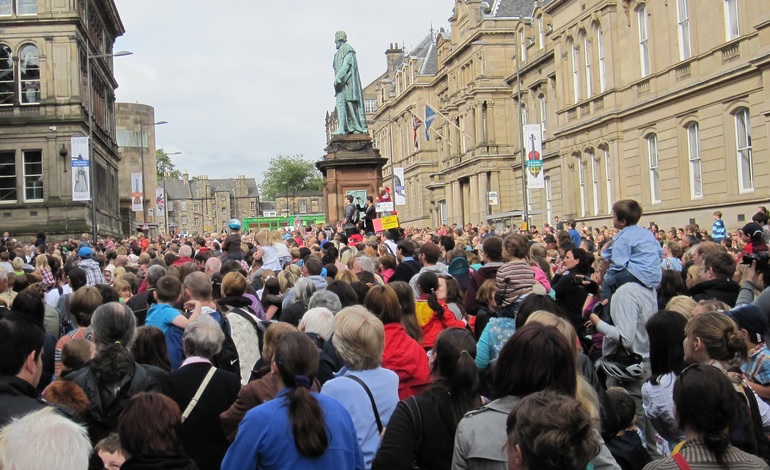 Heroic Britons are making a “staggering” effort to tackle a crisis sweeping across the country. And it puts the Conservative government to absolute shame.

Giving it their all

The Independent Food Aid Network (IFAN) and the Trussell Trust have released a new report on Britain’s “hunger crisis”. It calculates the “extent and value of volunteer contributions” at food banks across the country.

According to the findings, volunteers do a “staggering” 4.1 million hours of unpaid work each year. This amounts to around £30m worth of work on the National Living Wage.

Furthermore, the report highlights that there are currently around 2,000 food banks operating in the UK. So that’s a whole lot of Brits doing a whole lot of work for free, across much of the country. And they’re doing so to make sure people don’t starve.

IFAN’s Prof Jon May, however, explained why Britons are having to make such extraordinary efforts:

In exchange for our financial contributions, government is required to ensure sufficient support is available to all, so that no one needs to rely on charity to feed themselves or their families. That contract has been broken.

And May urged the government to step up:

But we call on government to stop relying on food banks, and to accept its responsibilities for Britain’s hunger crisis.

Samantha Stapley, the Trussell Trust’s Head of Operations, also warned that food banks can’t replace “the welfare safety net”. She said that “issues with benefit payments” remain the main reason why people need food parcels. And issues related to Universal Credit are increasingly an area of concern, according to Stapley.

Responding to the report, a Department for Work and Pensions (DWP) spokesperson said:

Reasons for food bank use are complex so it’s misleading to link them to any one issue.

We continue to spend around £90bn a year supporting people, including those who are out of work or on a low income.

Prime Minister Theresa May faced a severe backlash before the general election when she said there were “complex reasons” for nurses using food banks. Obviously, the government learns nothing from its mistakes.

The reason that people use food banks is, of course, hunger. And that is, in turn, because those people haven’t enough money to buy food. Delays in benefits payments, such as the six-week wait for Universal Credit, contribute to this. And the link is clear: in areas where the government has fully rolled out Universal Credit, there has been an average 16.85% increase in food bank use.

So what does the Prime Minister do to resolve this? She vows to keep the six-week wait. And she refuses to pause the extension of Universal Credit to other areas while her government fixes its problems.

Essentially, the British public is stepping up because the government appears to be wilfully failing its citizens. So the duty Britons feel towards each other is largely thriving, while the social contract the government has with its people seems to be breaking down.

But this contract isn’t just social. It’s financial too. The public pays for support for all, such as the NHS and benefits. It also, however, pays politicians wages. And if they’re not fulfilling the ‘role’ they’re paid to do, they shouldn’t be in the job at all.

– Find out more about IFAN.