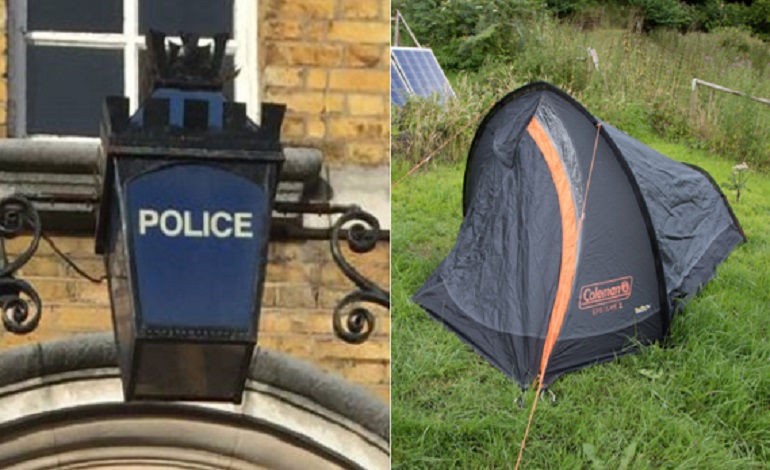 Police officers in London were left bemused on Saturday 21 October, as people turned up to hand themselves in. Their alleged crime? Giving out tents to homeless people.

As The Canary previously reported, Camden police and Labour-led Camden Council have been removing tents and shelters used by rough sleepers. They claim this is to help people “move off the street and rebuild their lives”. But homelessness support group Streets Kitchen disagrees.

So the group and members of Camden Homeless Solidarity visited Kentish Town police station on 21 October. They handed themselves in for the “heinous crime of possession and supplying of tents to homeless people”. At the request of those involved, The Canary has obscured their faces: 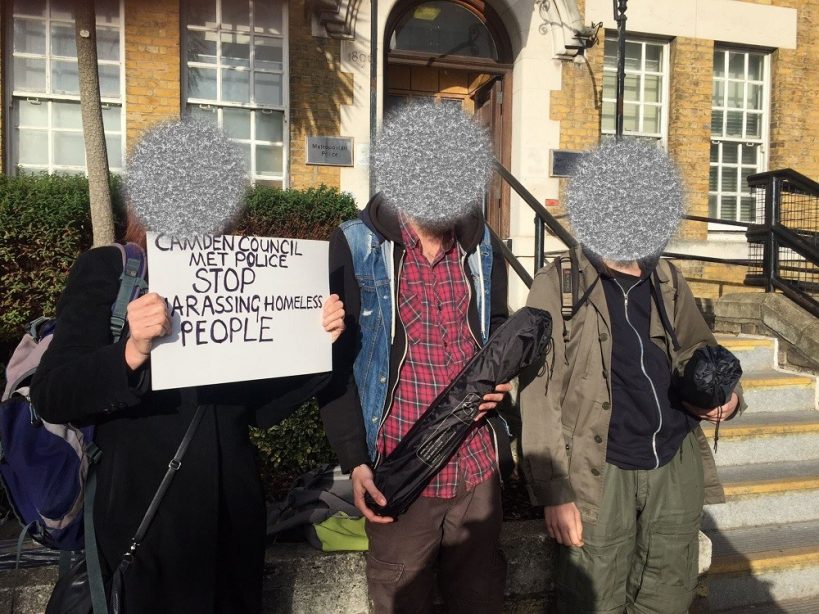 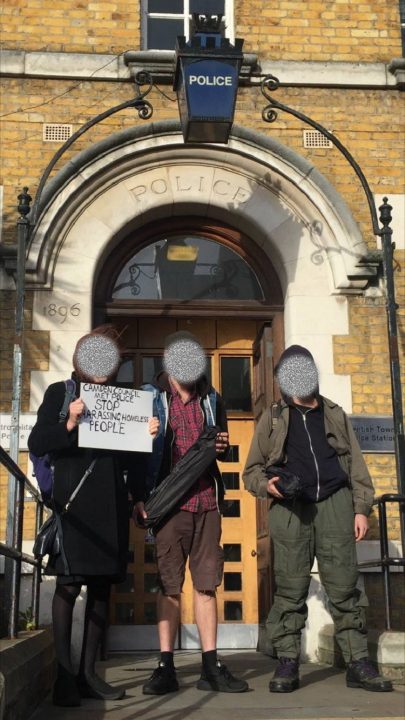 This afternoon a few of us turned up to Kentish Town police station to hand ourselves in for the heinous crime of possession of tents. The police didn’t appear to be interested and claimed that it was not, in fact, police policy to confiscate homeless people’s tents – so why are they still doing it?

As The Camden New Journal reported:

Tents have been confiscated from at least four sites in recent weeks in what the authorities say is a last resort after attempts to engage with those living inside were turned down.

It detailed six incidents in four locations of homeless people being forced to remove their tents, or police forcibly removing them. The incidents were all located in and around Camden Town. And two incidents reportedly resulted in people not receiving any support.

Authorities have been working with the Camden Safer Streets Team (SST) which claims it is ‘engaging’ with the people whose shelters it is removing:

3.
Big thanks to members of the public who reported issues on canal – info was very helpful in solving problem@MPSCamden @camdentalking pic.twitter.com/9MVDR2vak3

But Jon Glackin from Streets Kitchen disagrees. He told The Canary:

Over the last few weeks we have been hearing more and more of our homeless friends… telling us of the police and the council not only taking tents but sleeping equipment like sleeping bags and roll mats. The basic stuff people need to keep them alive and semi-comfortable on these cold nights…

Destroying people’s basic shelters like tents is not the answer, that’s barbaric; supplying more beds with support is the simple answer.

The “problem” Camden SST refers to is a rise of about 140% in the number of people sleeping rough in the borough between 2010 and 2016. The council claims this is due to:

But Glackin noted the 59-bed Holmes Road homeless hostel project, which was the ‘Overall Winner’ in the 2016 New London Architecture Awards, is still not officially open. Glackin told The Canary the tent crackdown is “particularly galling” when Holmes Road should have been completed in October 2016.

And on 18 October, The Camden New Journal reported that:

Hotels in King’s Cross have urged Camden Council to tackle homelessness after guests complained that they are opening bedroom windows to see rough sleepers on the streets.

[We] do not want to criminalise people for being homeless. Our aim is to help the many vulnerable people who live on the streets by attempting engagement and offering diversion options… Any enforcement action that is undertaken is only used when people refuse to engage and have refused diversion on at least two occasions.

You can read Camden Council’s response here. But Glackin told The Canary:

We will continue to provide tents, sleeping bags as well as warm clothes, hot food & company most evenings in Camden. The fact that Streets Kitchen has to keep going… to simply keep people alive should be Camden’s biggest shame.

And when police and the council are removing the only shelter some people have, it could be a torturous winter for many of London’s homeless people.