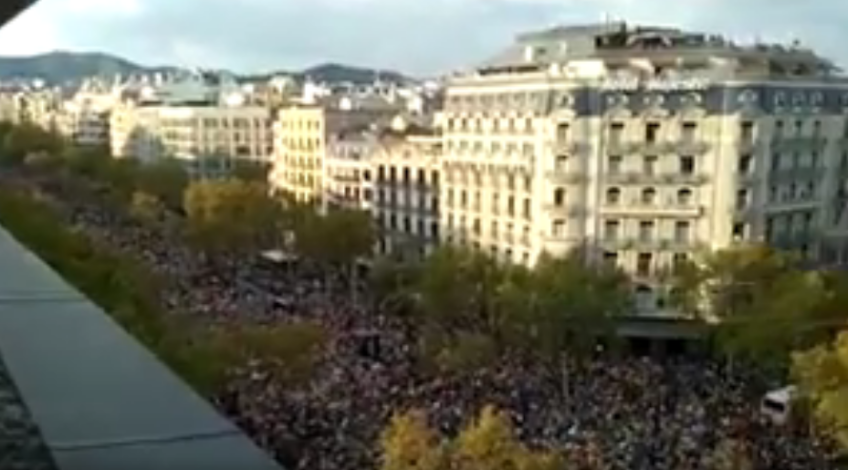 On Saturday 21 October, Spain’s Prime Minister Mariano Rajoy announced that the Madrid government will impose direct rule on Catalonia and that the entire Catalan government will be sacked. Rajoy also said that new elections will take place in Catalonia within six months. But Catalans were having none of this. At mid-afternoon, well before the demonstration was scheduled to begin, around 450,000 took to the streets [Spanish] to voice their displeasure:

Some hours later the numbers in the crowd had swelled further and Catalonia’s President Carles Puigdemont left the demonstration to go to the Palau de la Generalitat. There, in a televised address, he made it clear that the proposed removal of powers from Catalonia was:

[the] worst attack against the institutions and the people of Catalonia since the military dictatorship of Francisco Franco.

Puigdemont argued that the Rajoy plan should be rejected and requested that in the days ahead the Catalan Parliament should debate the proposal.

Under Rajoy’s plans, the Catalan parliament will not be allowed to present a new candidate for First Minister. This move is to prevent Puigdemont from being reappointed. Rajoy is also threatening [Spanish] to charge Puigdemont with rebellion, which carries a sentence of up to 30 years imprisonment, should he declare independence.

A video was posted by Anonymous, summarising why this action was taken:

Once again it has been made clear that only the people to have served the interests of their peoples are those who, despite persecution and slander, have stood firm against nationalist hysteria, Neo-Franco fascism and demanded an immediate right on self determination without annexations.

In September, grassroots activists organised around district defence committees, or committees to defend the referendum (CDRs), across Catalonia. But after the referendum on 1 October, it was clear they would still be needed, and so representatives of at least 90 CDRs met to draw up further plans:

Sabadell CDR was just one of many:

Meanwhile, Human Rights Watch has published a damning report on the violence deployed by Spain’s Guardia Civil on the day of the referendum. Hundreds were left injured and Catalonia’s Health Department estimated [Catalan] that 893 people had reported injuries to the authorities.

But in the immediate aftermath of the violence, no mention of it was made by Spain’s King Felipe VI in a televised address:

And only a week before Rajoy made his declaration, Pablo Casado, a spokesperson for Spain’s ruling People’s Party, warned that Puigdemont could share the same fate as a previous Catalan president, Lluís Companys. The latter was executed in 1940 by a Franco firing squad.

Also, in the days leading up to the Rajoy announcement, Madrid jailed Jordi Sánchez and Jordi Cuixart, who lead prominent Catalan separatist groups and who are now under investigation for sedition.

This is just the beginning

The mass demonstration in Barcelona may just be the beginning. Indeed, going on past form, it is likely that further protests will see strikes and widespread non-cooperation.

And threats by Madrid to criminalise the democratically elected government of Catalonia may well prove a huge mistake. For the millions who voted for that government are hardly likely to let that happen without a fight.