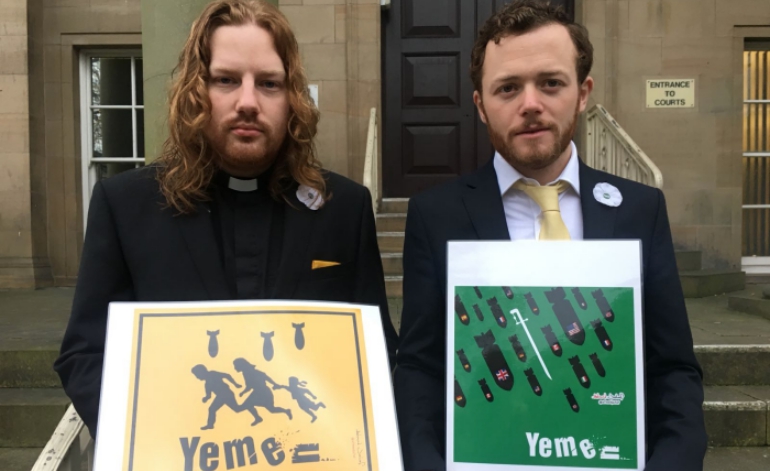 A court has found two people not guilty of attempting to destroy a Typhoon jet to prevent it being sent to Saudi Arabia. Sam Walton, a Quaker activist from London, and Daniel Woodhouse, a Methodist minister, took the action to prevent the fighter jet being used in the bombing of Yemen.

The pair were charged with criminal damage after breaking into the BAE Systems base in Warton, Lancashire. When they took the action, they released a statement explaining their motives:

We take this action in order to prevent the export of weaponry that will almost certainly be used in war-crimes. Eurofighter Typhoons and Tornadoes sold to Saudi Arabia are being used on combat missions in Yemen.

During the trial, Walton and Woodhouse argued that they had taken the action to prevent greater crimes taking place. And evidence was given on the bombardment of Yemen and accusations of war crimes committed by the Royal Saudi Air Force.

5,144 Yemeni civilians have been documented as killed in the conflict; 1,184 of them children. And there are 18.8 million people in need of humanitarian aid in the country. Meanwhile, since the bombing of Yemen began in March 2015, the UK has licensed £3.8bn worth of arms to Saudi Arabia.

And it seems the District Judge, James Clarke, agreed that they were justified in taking action. According to a statement seen by The Canary, Clarke stated:

They were impressive and eloquent men who held strong views about what they were doing and what they wanted to achieve. They impressed me as being natural in their delivery and honest throughout their evidence…

Speaking to The Canary, Walton was clear that the UK government must take action:

The verdict is a condemnation of BAE Systems and UK arms export policy. They are guilty of complicity in war crimes in Yemen. The UK must stop arming Saudi Arabia.

But the verdict will be particularly embarrassing for the government. Especially considering that Defence Secretary Michael Fallon has called on parliament to stop criticising Saudi Arabia to ‘help’ secure its latest arms deal. And Walton believes this should give impetus to people to take action:

Given Fallon’s comments yesterday, we would encourage anyone considering taking action to protest the UK arming Saudi Arabia should do it. It is clearly effective and if we take action we can stop the weapons deals that are killing so many people.

And Walton had a top tip for anyone considering such action:

This was an inspirational action that shows ordinary people can go out and make a difference to what’s happening in Yemen. You can also get involved, get active, and show the government that we are not going to keep quiet about these deadly sales.