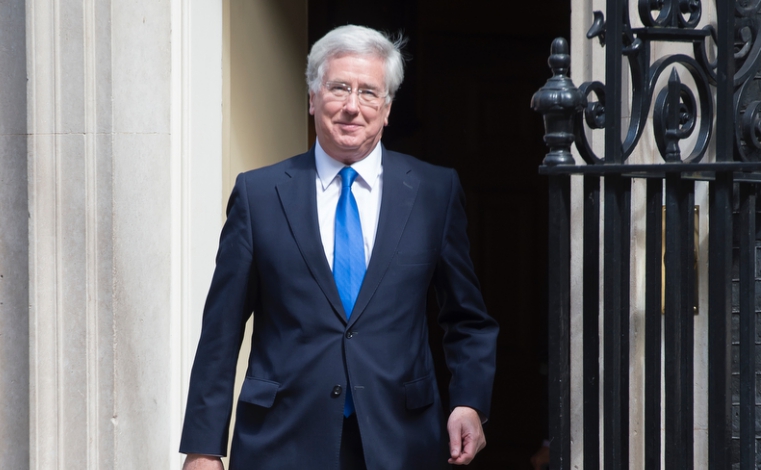 How exactly do you resign from a cabinet position after improper conduct but not feel the need to apologise, even when pushed to it?

The former defence secretary’s resignation means he will plummet to the position of backbench MP. It has emerged that Fallon was forced to quit partly due to ‘lewd comments’ he reportedly made to Leader of the House of Commons Andrea Leadsom.

The decision follows a spate of allegations involving senior members of the Conservative government. It also follows Fallon’s apology for repeatedly touching the knee of journalist Julia Hartley-Brewer at a dinner 15 years ago.

Jumping to the defence of MPs

In the opening statement of his resignation speech on Wednesday 1 November, Fallon jumped to defend MPs accused of sexual harassment:

When later asked by the BBC‘s Laura Kuenssberg if he was worried that more allegations might come out, Fallon said:

Well, the culture has changed now. What might have been acceptable 10 or 15 years ago is clearly not acceptable now.

Fallon’s attempt to use such defensive language to blame the victim met with disgust and disbelief.

Michael Fallon: "Behaviour that was acceptable 10 years ago is not acceptable now" NO, IT WAS NEVER ACCEPTABLE! pic.twitter.com/MSsFkg5YDI

Michael Fallon has resigned!! He says his behaviour has fallen short – not sure if he means the drinking, the support for Apartheid, the odd sexual penchants, calling a journalist 'slut', the Mike Freer thing or all those children killed by UK bombs… pic.twitter.com/Fyk9J2oZKe

Kuenssberg asked if he felt compelled to apologise, but Fallon failed to demonstrate remorse or compassion:

I believe we’ve all got to look back now at the past. There are always things you regret, you would have done differently.

Beginning of the Tory end?

So Michael Fallon has resigned as defence secretary. Is this the start of a Tory government collapse? #michaelfallon #ToriesOut

News of Fallon’s resignation also triggered speculation across social media that this could be the beginning of the end for the Conservative government.

“It’s not about biology, it’s not about sex” – Laura Bates of @EverydaySexism says sexual harassment is not an “inherent biological trait” pic.twitter.com/Tl2n2gut04

But all hell broke out again when Newsnight took the baton with its panel of 14 men and three women discussing sexual harassment.

A worryingly large number of panelists on #Newsnight openly victim blaming.
Now seems as good a time as ever to post this. pic.twitter.com/4aQVqNigg9

From questioning the silence of sexually abused women, to debating the boundaries of acceptable behaviour, social media users slammed the BBC for instigating victim-blaming conversations.

#Newsnight debate is an actual joke. This victim blaming is vomit inducing. VOMIT INDUCING. We clearly have a long way to go on this issue

Why were there 17 men discussing sexual assault and only 3 women?! An hour of mansplaining, victim blaming + ignorance #newsnight

Fallon’s resignation served to justify scandalous activity within the darkest chambers of Westminster. Meanwhile, a veneer of humility glossed over why he stepped down. But with accusations from Andrea Leadsom and ongoing analysis, it’s becoming clearer why he did.

In a letter to the Prime Minister, he vowed to work hard for Sevenoaks constituents. But their response to the debacle will be interesting to observe. And with his position as MP already being questioned, it could be just a matter of time before he resigns from this post too.

– Make your thoughts on the situation known. Contact your MP and be vocal on social media.

– You can also read more Canary articles on Michael Fallon.