Theresa May's new DWP Minister has a voting record on welfare like IDS. Which is very bad news. - The Canary 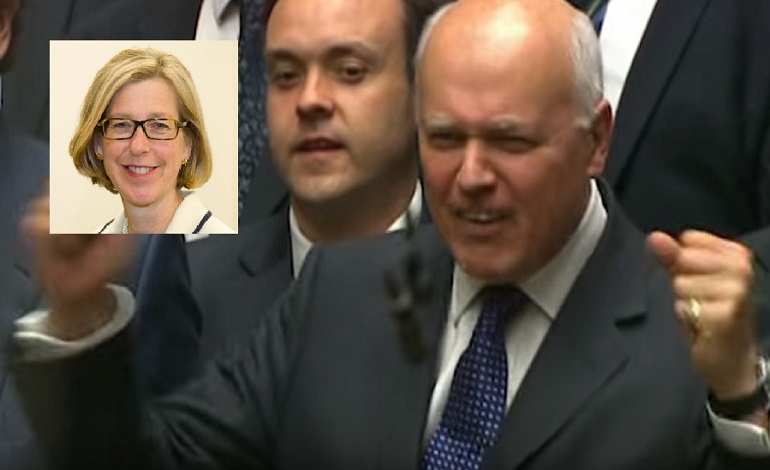 In the wake of Priti Patel’s resignation from government, there have been some moves in Theresa May’s cabinet. But after the PM promoted Penny Mordaunt to Secretary of State for International Development, it left a gap for a Minister of State at the Department for Work and Pensions (DWP).

So, May appointed Sarah Newton to the role. But sadly, a look at her voting record and contributions in parliament shows she’s about as pro-welfare and disability as former Work and Pensions Secretary Iain Duncan Smith; which should worry us all.

Newton has been the Conservative MP for Truro and Falmouth since 2010. She was previously Parliamentary Under Secretary of State at the Home Office. She will now take responsibility for sick and disabled people’s relationships with the DWP. But her voting record gives an insight into her thoughts on benefit claimants.

According to website They Work For You, she has:

Two matters of note that Newton voted on were:

Newton was, in fairness, always voting with the Tory Whip. But a speech from 2011 sheds some more light on her views.

During a debate on the benefit cap, which limits the amount of housing benefit people can claim, Newton said:

I imagine that there are a great number of vulnerable people who are… listening to this debate. For the sake of clarity, I think it is incredibly important to… remind the whole House that people who are disabled are not subject to the benefits cap.

I am a Conservative MP because I want to create a fair compassionate society… It is ingrained in me to value and treat all people equally. Any civilised society should be judged by how it takes care of its weakest members.

As a member of the government who the UN said had created a “human catastrophe” for disabled people, committing “grave” and “systematic” violations of their human rights, Newton’s words in 2011 sound somewhat hollow.