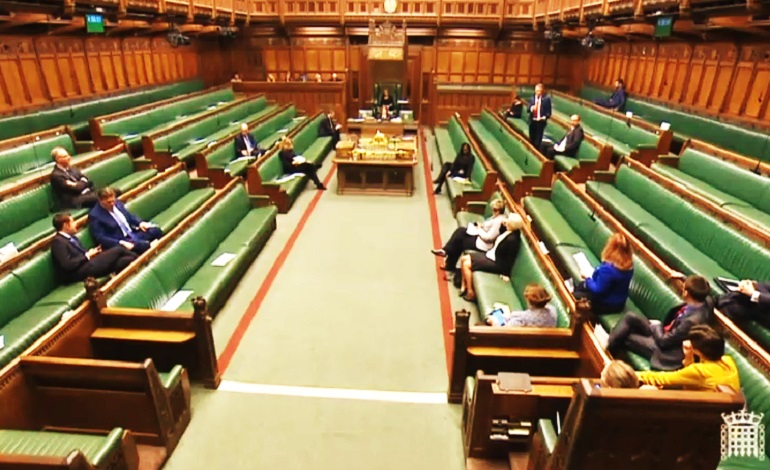 On Thursday 12 October MPs debated the most “challenging” report by a UN committee in its 10-year history. The reports authors had concluded that the UK government was presiding over a “human catastrophe” in its own country. But the number of MPs present sums up the battle disabled people in the UK face.

The debate on the UN Committee on the Rights of Persons with Disabilities (UNCRPD) report into the UK government was called by SNP MP Deidre Brock. At the debate were seven SNP MPs (20% of their total number in parliament); six Conservative MPs (1.9%); five Labour MPs (1.9%), and no one at all from the Lib Dems, Greens, Plaid Cymru, or DUP. The debate lasted 33 minutes, with Penny Mordaunt – the Conservative Minister for Disabled People, Health, and Work – giving a 19-minute statement.

This is a screengrab from the debate:

It was dreadfully disappointing and disheartening to see the House of Commons chamber practically empty during the debate on the UNCRPD report. That only the Shadow Minister for Disabled People attended the debate, with four other MPs from Labour, spoke volumes. The opposition need to put credible action behind their words of supporting the fight for equality inclusion and disability rights, and attend debates. But they also need to start really hearing disabled people’s voices.

In August, the UNCRPD assessed how well the UK government is sticking to its obligations under its convention. The government agreed to these obligations in 2009. And the UNCRPD was unequivocal in its opinion on how disabled people are treated by the Conservative government. Its Chair, Theresia Degener, said in a statement seen by The Canary:

The UNCRPD released its findings on 31 August; you can read The Canary‘s full analysis here. It said the government is failing disabled people in over 70 areas – from basic human rights, to not tackling discrimination, to the damaging impact of austerity and welfare cuts. It gave over 90 recommendations, the most given in its 10-year history.

Further to the report, Brock asked Mordaunt whether she would follow the UNCRPD’s recommendations and:

Before she answered Brock’s questions, Mordaunt criticised the UN, saying:

It would be quite wrong to conclude that time spent in scrutiny of a particular nation is an indication of its standing in the world on these matters.

She then said the UNCRPD report was, in essence, wrong:

The immediate next step will be a response to correct some of the factual inaccuracies in the UN report.

Regarding accessibility standards, she said the government:

regularly review[s] the scope for introducing further provision, including the duty to make reasonable adjustments to common parts of rented properties…

Coming to the UNCRPD recommendations, Mordaunt said the government was:

reflecting on how we take this work forward, and we are carefully considering our approach…

at the heart of shaping, evaluating and setting the agenda for the kind of employment support we should be providing.

Mordaunt finally noted that the government was tackling issues faced by disabled people as consumers. She also said they were using technology to better enforce the Equality Act and improve accessibility.

Labour’s Shadow Work and Pensions Secretary Debbie Abrahams hit back on Twitter at Mordaunt’s response before the Tory Minister had even spoken:

We’ve seen it all before

Mordaunt’s response was unsurprising. Throughout the UNCRPD process the committee criticised the government, saying it tried to misrepresent the impact of policies through “unanswered questions”, “misused statistics”, and a “smoke screen of statements”.

Also, the length of the sitting was to be expected, as adjournment debates can only last 30 minutes. Moreover, once the government minister has begun speaking there can be no response from opposition parties. So this kind of debate is effectively a ‘nod’ to an issue, which may explain why some opposition MPs didn’t turn up.

But this doesn’t detract from the debate’s appalling turnout. Although people on social media defended the Labour Party’s position – noting it had been securing a vote on Universal Credit, and reiterating the rules around adjournment debates.

But empty seats, especially on the Labour bench, amplify the impression to the public that disabled people’s rights are a niche issue – one that doesn’t require the full attention of MPs – just a handful to show willing by the party. As Peters alluded to, it gives the feeling that the “grave” and “systematic” violations of the 13.3 million disabled people’s human rights are not really that important.

Jeremy Corbyn previously faced criticism from DPOs for dragging his heels over his response to the UNCRPD report. He could have encouraged his MPs to pack out the benches on what is the first proper debate on any of the four UN reports that have been released in the past 16 months. This would have shown to the government, disabled people, and the public that Labour mean business on this extremely serious issue. And he could have been there himself.

Instead, it was left to an SNP MP to even call this debate. And it was also left to a backbench Labour MP to make the party’s only intervention, when its newly appointed Shadow Minister for Disabled People was sat there.

The UN previously said there was a culture in UK society where disabled people were viewed as “parasites, living on social benefits… and [living on] the taxes of other people”. And by not bothering to take half an hour out of their day to sit and listen to a debate over one of the most serious issues in recent history, Labour MPs merely add fuel to this fire.

Watch the debate in full: