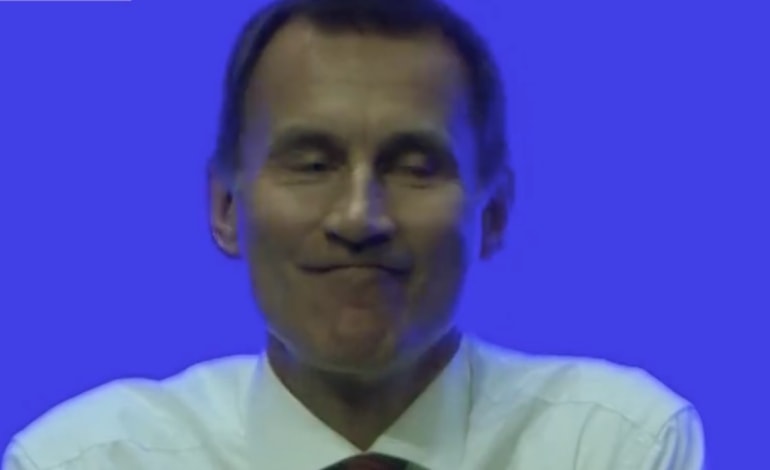 Health Secretary Jeremy Hunt visibly squirmed as he was confronted by a GP about the reality of the immense pressures they face. Hunt was taking questions from the audience after giving a speech to the Royal College of General Practitioners.

But despite Hunt’s promises of a £4m scheme to recruit new GPs, his audience was clearly unimpressed. Although it is perhaps hardly surprising, as Hunt also tried to abdicate responsibility for the crisis:

One GP spoke about her experiences:

Three years ago in this very room, I talked to you about the elephant in the room of overwhelming demand and how we were exhausted and drowning. And it has got worse on your watch as we told you it would. I, like many you alluded to in your speech, have resigned as a partner to protect my health. And in my capacity of running a peer support group of 8,000 primary care staff, I’ve watched other people break and two members have sadly killed themselves.

I therefore respectfully and professionally ask: why should we believe what you’re saying today when you weren’t listening then?

The audience responded with applause and cheers.

But Hunt refused to take any responsibility for the crisis or acknowledge that he wasn’t listening to the concerns of GPs:

Well I respectfully and professionally profoundly disagree with the sentiment of that question. And I’m sorry that [sic] if that’s what you think. But let me be clear. I did not say when I was here before that we were going to solve these problems overnight. And I think if you look at what I said at the start of this speech, I don’t think that you could say for a moment that I was ducking the challenges faced by general practice.

And he set out some of things that he claims he is doing:

I have put in place a programme to get 5,000 more doctors working in general practice – that doesn’t happen overnight… I’ve announced plans to increase the number of doctors we train across the NHS by 25% – that’s one of the biggest increases in the history of the NHS. And I am trying to do everything I possibly can to resolve these situations.

Before absolving himself of responsibility:

Meanwhile, Dr Chaand Nagpaul – chairman of the British Medical Association – warned that, unless “funding, capacity and recruitment issues” are addressed, then the NHS will be left:

sleepwalking into another, entirely predictable, winter crisis, with patients and the quality of patient care suffering as a result.

But while Hunt is planning initiatives to recruit more GPs, there is evidence that this won’t be enough. According to a survey in April, two in every five GPs are thinking of quitting the profession. And while Hunt may trumpet the fact that his increases are “one of the biggest in NHS history”, it is against the backdrop of GPs quitting, coupled with both a population increase and an aging population. And in just the last year, 200 GP surgeries closed while 760,000 new patients registered for services.

Hunt may think health professionals can fix the NHS. Many would love to. But they can’t do it without the funding. And that lies firmly at his and the government’s door.