Jeremy Hunt is thinking of banning you from just turning up at hospital. Even if you're sick or injured - Canary 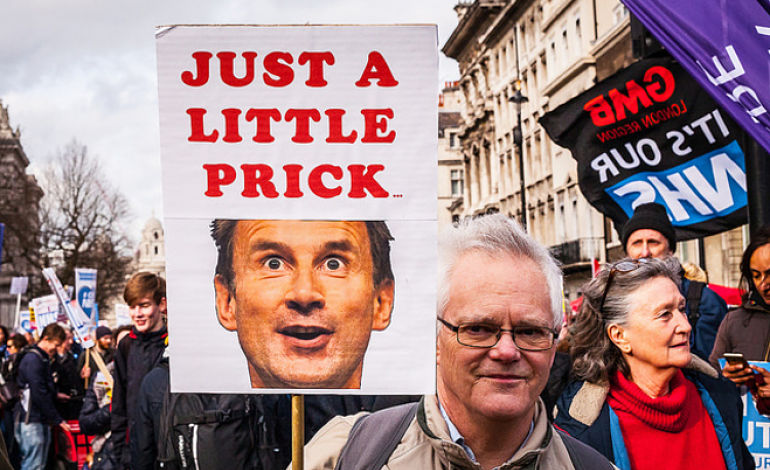 The government and NHS England are in talks about banning people from just turning up at hospital emergency departments (A&E). Instead, under plans for a trial scheme, if you were sick or injured you’d have to be referred by your GP or the NHS 111 helpline, or wait for an ambulance to take you.

‘Talk before you walk’

As Pulse reported, Dr Helen Thomas, national medical advisor for integrated urgent care at NHS England, was speaking at a conference about urgent care. She said that Health Secretary:

Jeremy Hunt has mentioned to some of my colleagues, maybe we should have a ‘talk before you walk’ and we may well pilot that. I think it’s been done in other countries where they’ve actually said you can’t come into ED [A&E] until you’ve talked on referral or you have to have that sort of docket that you’re given by having talked on the phone that you do need to come to ED.

The idea comes off the back of an increasing strain on A&E departments. In September, 89.7% of patients were seen in four hours in A&E, compared to 90.6% a year earlier. And in some hospitals, people have been waiting 13 hours to be treated.

Papering over the cracks?

A ‘talk before you walk’ scheme would mean patients having to see their GP or ring NHS 111 first. Both Thomas and Dr Simon Abrams, Chair of Urgent Care UK, said the idea was “interesting”. But Council Chair of the British Medical Association Dr Chaand Nagpaul disagreed. He told The Telegraph:

Trying to solve a problem in one part of the NHS by shifting it onto another won’t work. Pressure on [A&Es] is down to seriously-ill patients and a lack of capacity and funding across the whole system. All this proposed system would do is add an extra layer of bureaucracy, and create further delays, for patients, and add to pressure on the NHS, GPs, or other clinicians.

And the figures surrounding GP practices back up Nagpaul’s point. As The Canary previously reported, figures [pdf] for the year up until 30 June 2017 show that 202 GP practices either closed or merged across England – with just eight opening to replace them.

In contrast, NHS Digital’s data showed that the number of patients registered with GPs had increased, again; up 55,178 in July compared to June. And there are now 2,427,526 more registered patients than in July 2013. Meanwhile, the number of full-time GPs dropped by nearly 3% in the year up to March 2017.

But comments about the ‘talk before you walk’ scheme from apparent medical professionals underneath the Pulse article echoed Nagpaul’s feelings. One user wrote:

How people pitch up doesn’t dictate their seriousness. It’ll be less than 24 hours of this being implemented that some poor stoical patient will keel over with a STEMI in a GP practice having been bounced out of A&E.

There are absolutely no plans to pilot this approach – patients can be reassured that unprecedented planning has gone into preparing the NHS for this winter, supported by an extra £100m for A&E departments and £2bn for the social care system.

There are no formal plans to consider any pilots about stopping walk-in patients. It was just a pie in the sky possibility that Pulse have massively overblown.

What a ‘half-witted’ Hunt

Whether the scheme goes ahead in a trial form or not, the fact that Hunt has tabled the idea shows the depth of thinking in the DoH. That is, instead of listening to medical professionals who are saying the NHS is in “terminal decline“, the government merely invents even more preposterous ways to impede an already struggling system. Some say this is to make the NHS unviable, leaving privatisation as the only option. And with Hunt at the helm, tabling “half-witted” ideas on a regular basis, anything is possible.

– Join The Canary, if you appreciate the work we do.