An anti-war anthem has been re-released. And its timing for Remembrance Sunday is perfect. [VIDEO] - Canary 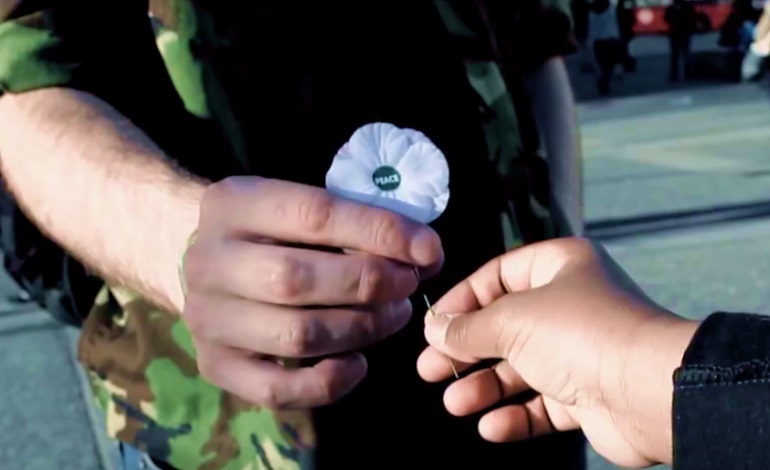 An anti-war anthem is being re-issued by the artist, as an alternative viewpoint to the current narrative surrounding military conflict. And the timing is intentional, as he hopes the track will provoke people to ‘just wonder’ about war, on Remembrance Sunday.

Just Wondering is by conscious rapper and poet Potent Whisper, featuring the vocals of Lara Lee; also known as Floetic Lara. Originally released in 2014, the track received critical acclaim, being on heavy rotation on both BBC Radio One and Six Music. And it’s easy to see why, as Just Wondering does not hold back in its critical appraisal of military operations.

Whisper (aka Georgie Stephanou) comes from a single-parent, working-class family on a council estate in South West London. And it’s politics and social issues that shape Whisper’s music. Since 2015, Whisper has come into his own. From the grime-heavy anti-gentrification anthem Brixton First featuring Lee, to his collection of spoken word Rhyming Guides To… his artistry and ability to twist politics with music and words is fast gaining him a reputation.

But on Just Wondering Whisper takes a darker turn, asking the listener [0:28]:

What would you do if it was your family?
Your town in pure anarchy?
If it was your house you were forced out of casually?
If it was your blood, your son or your mums?
They’re running on your funds, so aren’t these your guns?
How can it be a ‘war’ if only one side declares it?
Pause…
Where are their kids on the front line or air strip?
Yours…
Why do we serve a queen? When did we turn to sheep?
Why do we murder leaders when they seek an urgent peace?

The Canary caught up with Whisper to discuss the track, and his thoughts on war more broadly.

The structure of Just Wondering is unique, insomuch that nearly every line in the song is a question Whisper had at the time about war. And he said this was very intentional:

Each line in the song is a different question I had in relation to war. I find that when attempting to make change, a question can be more powerful than a statement. For example, when an activist shares information in an impassioned way, they run the risk of being seen as preachy or somebody with an agenda. This usually creates a snap response of ‘I’m not going to listen to you’ and in turn creates a barrier between people and the information. Sometimes instead of sharing information or a specific viewpoint, it can be more effective to ask a good question that arouses a genuine interest and prompts a search for truth.

Just Wondering’s video features Joe Glenton, a solider who refused to serve a second tour of Afghanistan on moral and legal grounds. Glenton’s case was well publicised, as in 2010 he was eventually sentenced to nine months in a military prison for going absent without leave (AWOL). But this was not before he made his feelings on the British military very clear, speaking publicly about his opposition to war. As The Guardian reported at the time:

Glenton was at first charged with desertion, which carries a maximum 10-year sentence, as well as five other offences connected to his anti-war activity. But these were reduced to a single charge of AWOL.

His legal team believe this was done to avoid a potentially embarrassing full trial at which Glenton planned to defend himself on the grounds that the entire Afghan war was illegal under international law.

And it is Glenton’s actions which prompted Whisper to include him in the video.

But the move may seem controversial to many, as Whisper’s video also advocates the Peace Pledge Union’s white poppy campaign. This is the antithesis to the Royal British Legion’s red poppy one. As the Union says:

There are three elements to the meaning of white poppies: they represent remembrance for all victims of war, a commitment to peace and a challenge to attempts to glamorise or celebrate war.

And for Whisper, the white poppy is especially important. He told The Canary:

I choose not to wear a red poppy because I do not agree with the way it has been politicised and used to glorify war. So, I believe that those who had their lives taken should be remembered and commemorated. I also believe that it is tragically illogical to mourn the loss of life by wearing an item that indirectly glorifies war. For these reasons I choose instead to wear a white poppy and the final scene in the music video shows a child giving a white poppy to ex-soldier Joe.

But ultimately, the video perhaps leaves viewers with more questions than answers. This is why Whisper made an accompanying documentary, with politicians such as Jeremy Corybn answering the questions he asked in the video:

And Whisper also answers the overriding question many listeners may be left with. He said to The Canary:

The words that many have found on their tongues when considering the atrocities of war and their role in it. Most of us are good people who care about the welfare of others and want to preserve human life. We recognise the unnecessary devastation and bloodshed that war brings but we feel powerless and unable to prevent it. This song is suggesting that what we can do – even on the most basic level – is question what is happening and why.

As he says in Just Wondering:

Am I weak for compassion? Is peace not an action?

And on Remembrance Sunday, perhaps we should all be asking ourselves if peace is really a stronger and far more positive action than war.

– Support Stop The War Coalition and the Peace Pledge Union.