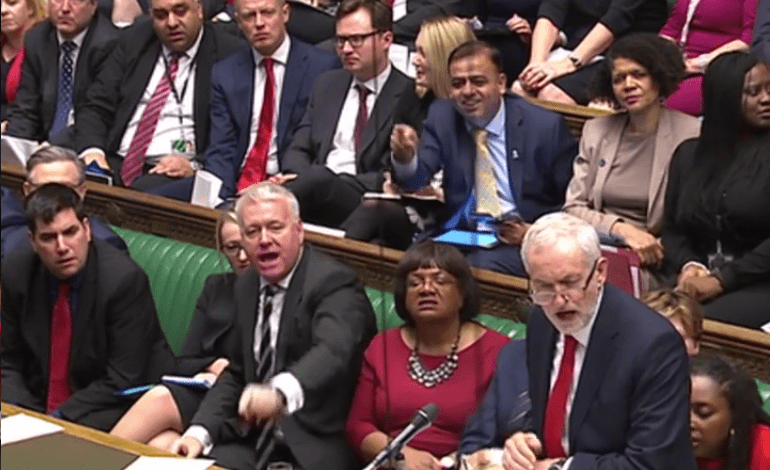 Conservative whip Andrew Griffiths MP learnt a swift lesson today. Don’t joke about social care cuts in front of Jeremy Corbyn. The Labour leader broke with his response to the budget to shut down the MP.

The Chancellor failed to even mention the social care crisis in his budget, despite cuts of £6bn to social care under the Conservatives.

Only seven minutes into Corbyn’s speech, the deputy speaker had already intervened three times to prevent Conservatives shouting the Labour leader down.

For Corbyn, this jeering MP was the final straw:

The Labour leader was saying:

Over £6bn will have been cut from social care budgets by next march. I hope the honourable member begins to understand what it’s like to wait for social care, stuck in a hospital bed, while other people have to give up their work to care for them.

Corbyn then laid into the “uncaring, uncouth attitude of certain members opposite”. Shadow Secretary for Education Angela Rayner wasn’t impressed either:

Tory MPs laughing as Jeremy details how the social care budget is being cut and so many vulnerable left in a desperate situation, they should hang their heads in shame at such behaviour #Budget17

We are now beyond the crisis point. We really are at the edge of the cliff now.

Yet Conservative MPs seem to think it’s a laughing matter:

Viewers noted the tangible fury from the Labour leader:

Real anger from Corbyn when a Tory sneers at what he was saying about cuts to social care. Good to see him express the anger so many of us feel. #Budget2017

My god, but Corbyn was on perfect form when that Tory idiot heckled him about Social Care. He reflects the anger so many of us feel. Been through that nightmare with my late Dad. We were lucky cos he had savings. Millions don't.

'The uncaring, uncouth attitude of members opposite has to be called out' – incredibly inspiring to see Corbyn's passion for social care #Budget2017

Tory MPs laughing about cuts to social care, that sums them up, Corbyn rightfully angry, he nailed them there #Budget2017

It’s quite astonishing that Chancellor Philip Hammond failed to even mention social care in the budget. But even more so that Conservative MPs thought it was fine to jeer and laugh about it afterwards. Corbyn was absolutely right to put Griffiths in his place.