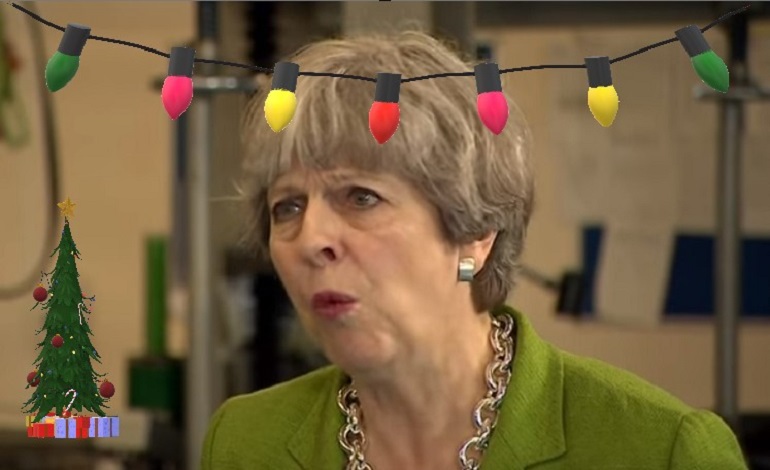 A song highlighting the damage Theresa May’s government is doing to the country is about to join the race for this year’s Christmas number one. But the track also offers a message of hope; although the band behind it still maintains May is a ‘Liar Liar’…

Captain Ska is the band behind the summer smash hit Liar Liar GE2017. But now, the group is back with a new track called Sons and Daughters. Money raised from the track will be passed to the People’s Assembly, which will use it to buy supplies for food banks up and down the country.

The Canary caught up with Captain Ska’s frontman, Jake Painter, to talk about the track and his hopes for the message the group wants to convey.

Sons and Daughters is quite a departure from Liar Liar. While the two share the same musical influence, reggae, Liar Liar was very much an angry track, calling out what the Conservatives had been doing to the country. But in Sons and Daughters, Painter and co offer a more soulful message of hope, saying:

Searching for a better world

For my sons and my daughters.

We’ve been struggling so long

Yes, my sisters and my brothers;

The track, with superb vocals from Adeola Shyllon and which you can download here, was officially released on 15 December:

Painter told The Canary that the song was inspired by the birth of his second child. He said he and his partner were “so bowled over” by the service from the NHS; but that he was left “shaking with anger” at how overworked and demoralised the staff he saw were. So the name Sons and Daughters was chosen because Painter was thinking about how “we’ve got to change something for future generations, because it can’t go on like this”.

But Painter says that Sons and Daughters:

Is an anthem of hope. It still calls out the Tories, very much. It also calls out the right-wing press. You’ll hear from the lyrics that we still have a dig at the Tories, at what’s going on – but especially at homelessness which is still on the rise. Where I live, on my estate, I know a lot of families with two children living in one bedroom flats…

The song, which The Canary has been allowed to hear and reproduce, says:

How can it be?

They told us that the streets were paved with gold.

But when I look down

And people sleeping in the cold.

Painter also uses the song to call out the UK media. It accuses the newspapers of “poisoning our minds” to sell their “rags of hate”. And Painter told The Canary:

The right-wing press were so anti-Corbyn, and have really been anti progressive ideas for a long time. So it’s also calling them out and saying ‘You told us this couldn’t happen; that these ideas were outdated – but they’re clearly not’.

The Canary asked Painter how life had been for him and the band since Liar Liar became such a massive hit. He says:

Well, I’ve got one little one who’s two, and one just born. Me and my wife are just on average incomes. I’m not saying we’re poor at all. But we can’t make ends meet, we can’t afford childcare – and we’re pretty lucky in our position. Life must be so stressful and so difficult for so many people out there.

But ultimately, Sons and Daughters is about fighting for a better world for future generations. Included in the track is a sample from Labour leader Jeremy Corbyn speaking at Glastonbury. He announces that “another world is possible”. And if there’s one message to take away from Captain Ska’s superb track this Christmas, it’s exactly that.

This article was updated at 3.15pm on 15 December to include the full track and download options.

– Buy Sons and Daughters on your preferred platform – remember, sales are going to food banks and the People’s Assembly.

– Find out more about Captain Ska and support the People’s Assembly.