The hatred that links Britain First, the murder of Jo Cox and Trump's America [TWEETS] - Canary 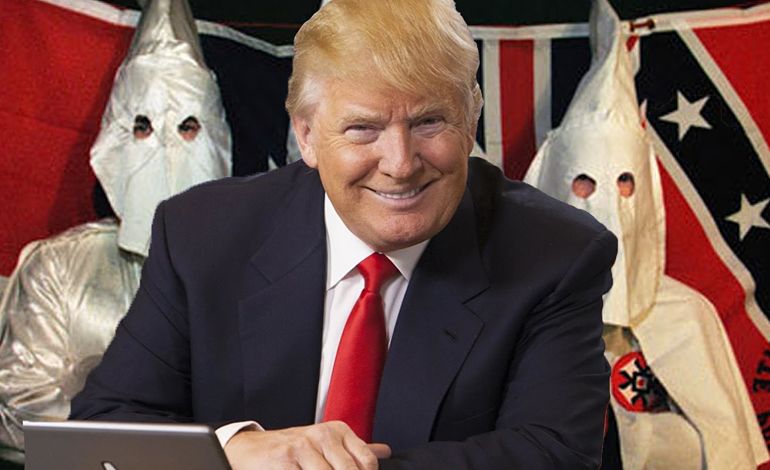 US President Donald Trump has been widely criticised for retweeting three videos originally tweeted by the deputy leader of far-right group Britain First (BF). But Trump has also shown sympathy for organisations in the US that, like BF, profess the same ideology that inspired Thomas Mair, the convicted killer of Labour MP Jo Cox.

Trump is unapologetic, which may not be surprising, given his tolerance of the US far right and its messages of hate.

Trump retweeted three unverified videos, posted by BF’s Jayda Fransen. One included the caption “Muslim migrant beats up Dutch boy on crutches!” Another claimed to show an “Islamist mob” pushing a teenager off a roof and beating him to death. A third allegedly showed a Muslim man destroying a Virgin Mary statue. At least one of the videos bears no relation to its heading.

Downing Street was highly critical of these tweets. But Trump responded, telling British Prime Minister Theresa May to “focus on the destructive Radical Islamic Terrorism that is taking place within the United Kingdom”.

Perhaps the most pertinent response to this came from Jo Cox’s husband:

You have a mass shooting every single day in your country, your murder rate is many times that of the UK, your healthcare system is a disgrace, you can’t pass anything through a congress that you control. I would focus on that. https://t.co/SNcqOZGvLQ

Mair’s link to the US

Mair was convicted of the murder of Cox and sentenced to life imprisonment. He stabbed her and also used a sawn-off shotgun to shoot her. Three eyewitnesses to the murder  – Clarke Rothwell, Aamir Tahir and Graeme Howard  –  claimed Mair shouted “Britain First” or “Put Britain First” when killing Cox.

According to records obtained by the Southern Poverty Law Center (SPLC), Mair was a supporter of the US neo-Nazi National Alliance (NA). He purchased a manual from the NA that included instructions for constructing a “Pipe Pistol For .38 Caliber Ammunition”.

According to invoices, Mair sent just over $620 to the NA for goods, including subscriptions for “Chemistry of Powder & Explosives”, “Incendiaries”, and “Improvised Munitions Handbook”: 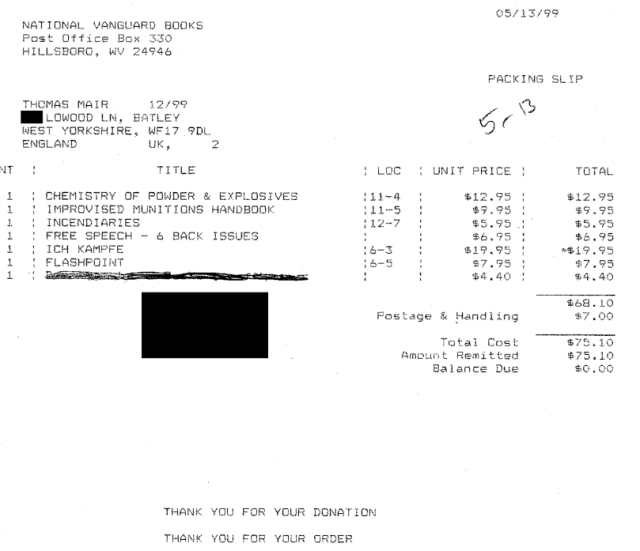 A 1999 report by the SPLC identified NA as part of a network of white supremacist organisations, such as  the Ku Klux Klan (KKK), the National Association for the Advancement of White People, and America First Party . NA founder William Pierce spoke at a British National Party conference in London. Pierce was the author of The Turner Diaries, which notoriously inspired Timothy McVeigh’s 1995 bombing of the federal building in Oklahoma City that left 168 people, including 19 children, dead. According to Todd Blodgett, an FBI paid informant, Mair attended a meeting arranged by Pierce in London.

Mair was loosely affiliated with the Leeds chapter of the National Alliance… Mair was also plainly excited re the efforts that Pierce was making to further penetrate the UK.

Trump’s unscripted speech on 15 August revealed his true views about what happened when a car was driven at high speed into civil liberties protesters in Charlottesville. One woman was killed and 19 others injured. But Trump claimed there were some “very fine” people among the white supremacists and Nazis; and suggested anti-fascists were just as much to blame as their opponents.

The truth of what happened is revealed here:

There is a fine line between fascism and hate crimes. Over the past nine years, right-wing extremists in the US plotted or carried out nearly twice as many terrorist attacks as Islamist extremists.

But the consequences echo far beyond US borders. As the Cox family and victims of racism everywhere know only too well.