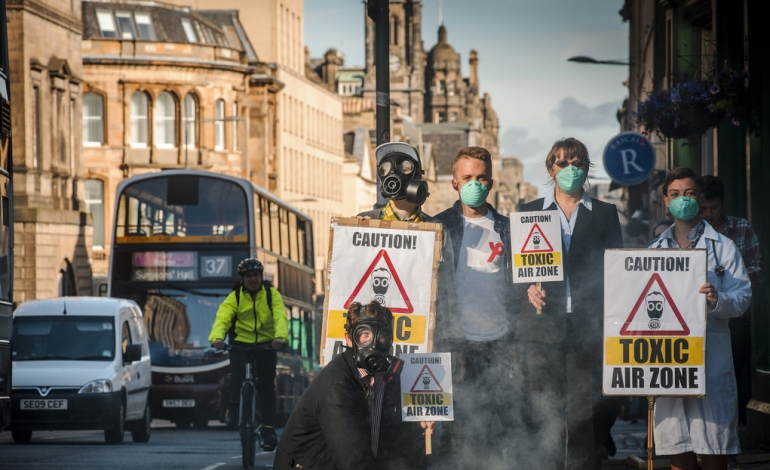 A parliamentary inquiry has slammed the government for not doing enough to tackle air pollution. Levels of nitrogen dioxide in the air are still illegal. Other countries suffering from poor air quality are embracing innovative tech solutions to deal with the problem. This is something that the government has to take on board. Their lazy approach to this problem so far has been shameful.

We are not getting any clear message here about what you are doing about it. The government is being dragged all the time screaming to put poor air quality right.

It’s confusing why ministers are so reluctant to deal with the issue. After all, air pollution affects everyone, including them. Perhaps the government is in denial about the scale of the problem. The 40,000 people who die every year because of dirty air show that this is a “public health emergency”, in the words of Penny Woods, chief executive of the British Lung Foundation.

The government has shied away from establishing more “clean air zones”. These zones would mean that the most polluting vehicles pay extra for driving in the most heavily polluted cities. Oxford city council and Oxfordshire county council, on the other hand, have taken a more proactive approach. They are banning petrol and diesel cars from Oxford city centre.

These plans to phase out petrol and diesel cars are certainly a step in the right direction. But is it enough? Green MP Caroline Lucas doesn’t think so. Instead, Lucas says:

the government should be embarking on a paradigm shift when it comes to how we get about in this country.

This is where the tech sector comes in. Firstly, we need to properly monitor the situation. The University of Leicester and aerial mapping company BlueSky have joined forces in a venture called EarthSense Systems. And they recently published MappAir – a high resolution nationwide map of air pollution. James Eddy, Managing Director of EarthSense Systems, said:

there simply isn’t enough data available for those charged with tackling the issue to make informed decisions. MappAir can provide a street-view to city-wide visualisation of air pollution…

Air pollution is not a constant threat. Not only does it differ from location to location, as MappAir clearly shows, but it also changes from morning rush hour to afternoon school run, and from week day commutes to weekend leisure pursuits.

If we want to tackle air pollution effectively then we need accurate data so the government can plan accordingly.

Commuting contributes significantly to air pollution in the big crowded cities. For the sake of cleaner commuting, BMW and Tongji University in Shanghai have proposed building elevated e-bike cycleways in congested Chinese cities. This is exactly the kind of transport tranformation that Lucas is talking about. London, for example, would benefit hugely from this change. Green Future emphasises the benefits of e-bikes, pointing out that:

if every American living within five miles of their work were to commute by bike at least one day a week, it would be like taking a million cars off the road entirely.

We all have the right to clean air. The government needs to embrace tech to ensure that no one has to live in an environment which damages their health.