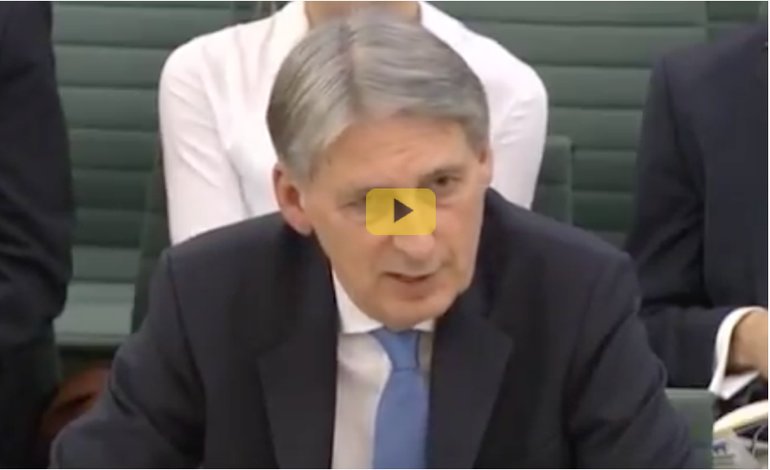 Philip Hammond should resign immediately for his sickening comments about disabled people. A chancellor who believes disabled people are a drain on the UK economy has no place in government.

According to the Office for National Statistics (ONS), the productivity of UK workers fell by 0.1% per hour between March and June this year. At the same time, UK workers clocked more hours. By 2015, the UK was lagging well behind Germany, the US, France and Italy.

The Treasury Select Committee questioned Hammond about this contradiction on Wednesday 6 December. And he chose to scapegoat disabled people, saying:

Disabled charity Scope called on the Chancellor to withdraw his comments and issue a full apology, saying:

These comments are totally unacceptable and derogatory. They fundamentally undermine the government’s policy to get more disabled people into work, and the ambition set out by the Prime Minister just a week ago.

Philip Hammond has just told a Commons committee that "very high levels" of disabled people being in jobs is in part responsible for the UK's plummeting productivity. Wow.

Absolutely disgusted by your comments on disabled people @PhilipHammondUK. So counter productive, unfair and downright ignorant

So, the multi-millionaire @PhilipHammondUK with the erm, unique tax arrangements, is blaming disabled people for the low productivity that he is overseeing. I'm actually starting to run out of words to describe their thick as shit ignorance.

Meanwhile, in reality, the UK productivity crisis began with the financial crisis of 2008. If the economy had stayed on its 1997-2007 course, an hour’s work would be worth 17.9% more than it is today. But a decade of failed economic policy has driven UK labour into the dirt.

Currently, output per worker-hour remains 2% below the pre-crisis levels of 2008, whereas in the rest of the G7 group of rich countries it is 5% higher. As The Economist put it recently: ‘the French could take Friday off and still produce more than Britons do in a week’.

This is not normal. It is almost a physical law that, when an economy grows, so do productivity and wages. But not in the UK, thanks to a series of poor political choices: to favour financial services over the wider economy; to fail to invest in training and skills; and to dilute workers’ rights, creating a low-pay/no-pay economy.

– Support the work of campaigns like Disabled People Against Cuts (DPAC) and The Black Triangle Campaign.