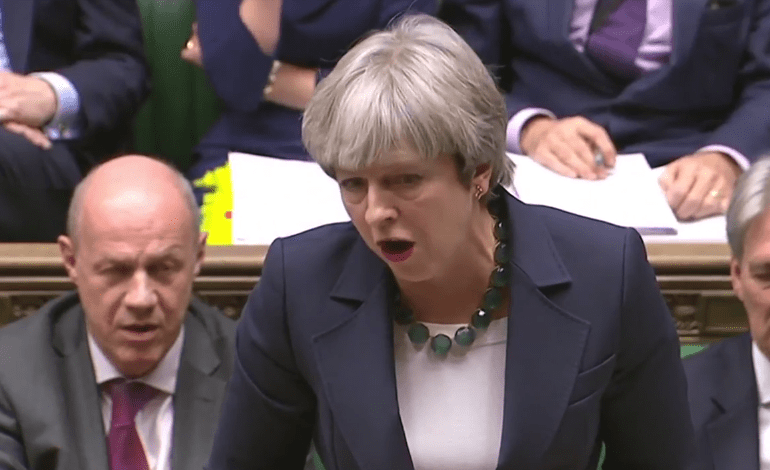 One tweet seemed to sink Theresa May before Prime Minister’s Questions (PMQs) even started.

May’s government relies on support from the Democratic Unionist Party (DUP) to command a working majority, so the party can make the Prime Minister bow to its will. And on 4 December, the Brexit negotiations hit deadlock and this weakness was laid bare; as DUP leader Arlene Foster thwarted May’s EU agreement over the Irish border at the last minute.

Others made a similar joke:

I will give Jeremy Corbyn a 20 Euro note if he starts #PMQs with “I’ve had an email from Arlene, from Belfast…”

In the chamber, it wasn’t much better for the Prime Minister. Jeremy Corbyn challenged May on Brexit with every question. The Labour leader quoted a prominent Conservative Party donor, who said:

Yesterday proved beyond doubt that Theresa May is not only weak but that it’s her incompetence that is hobbling the UK… that is why I’m calling for that bunch of jellyfish masquerading as the cabinet of the United Kingdom need to get some balls and get her out.

May said that there had been “very good progress” in the Brexit negotiations. This was met with astonishment and laughter in the Commons [6.27] and derision on social media. In reality, the Conservative government is in deadlock with the EU because of its weak minority administration. In the Commons, May claimed [13.38]:

But this is an impossible balancing act. Hard-Brexiteers in May’s party won’t accept the UK remaining in the customs union or single market. But if the UK leaves these trade agreements, that will create a hard border between Northern Ireland (part of the UK) and Ireland (part of the EU). Ireland won’t accept a hard border and, as an EU member state, has a veto on any deal with the UK. On top of all that, the DUP won’t accept any deal that gives Northern Ireland a different trade status from the rest of the UK. As many joked, DUP leader Foster seems to have more control than the Prime Minister. What a shambles.

Watch a compilation of the exchange here: