Shouts of ‘where is she?’ as Theresa May ducks parliament after the Brexit implosion [VIDEO] - Canary 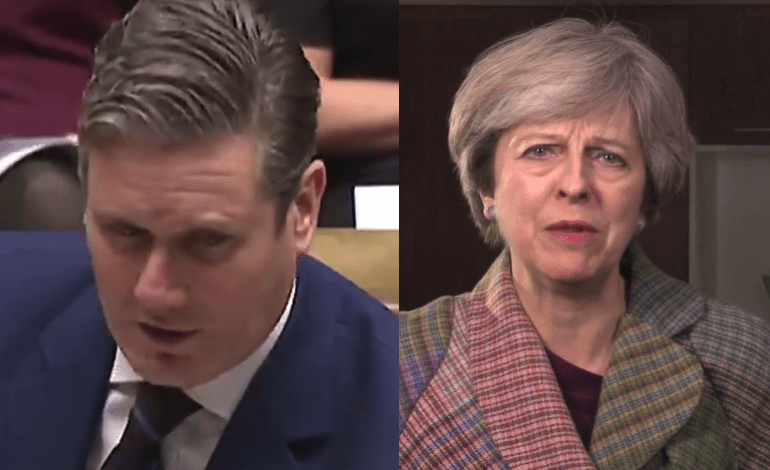 Labour MPs shouted “where is she?” as Theresa May appeared to duck parliament the day after the Brexit implosion. Shadow Brexit Secretary Keir Starmer was laying into the Conservative government over the deadlock:

The last 24 hours have given a new meaning to the phrase ‘coalition of chaos’. Yesterday morning, No 10 was briefing that a deal would be signed. There was high expectation that the Prime Minister would make a triumphant statement to the house… By tea time, we had a 49-second press conference saying the deal was off.

On 4 December, Theresa May tried to make an agreement with the EU to solve the crisis of the Irish border without securing the backing of the Democratic Unionist Party (DUP). Given that the DUP props up the Conservative minority government, that didn’t go well. The agreement proposed that Northern Ireland remains tied to some EU regulations, while the rest of the UK cuts ties. This was then thwarted by the DUP, because the party views a special agreement for Northern Ireland as a fracturing of the UK.

Labour MPs demanded ‘Where is she?’:

“The DUP tail is wagging the Tory dog… What an embarrassment … if the price of the PM’s approach is reopening of bitter NI divides, the price is too high”: @Keir_Starmer to Davis: pic.twitter.com/8xFYYap8yr

Starmer had begun by using the Conservatives’ own campaigning slogan against them. During the past two general elections, the Conservatives have warned of a ‘coalition of chaos’ between Labour and the SNP:

And ahead of the 2015 election, David Cameron warned:

With her own coalition of chaos on display, May appears to have ducked parliament over the Brexit deadlock. It’s hard not to agree with Starmer when he calls the situation an “embarrassment”.

– Support The Canary so we can hold the powerful to account.