Do right-wing Brexiteers have no shame? Check out the bulls**t they're promoting now [OPINION] - Canary 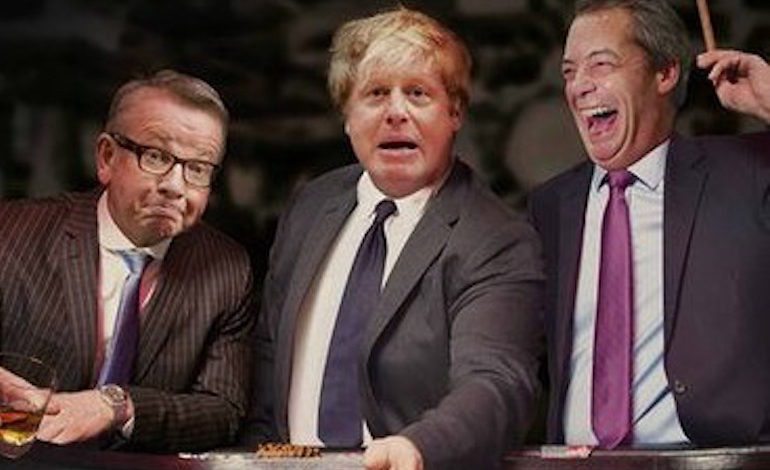 What does Brexit mean to you? It’s a simple question. And despite the current, polarised climate, it’s also one all sides of the political spectrum can answer. After all, many on the left had argued to leave the EU for years.

Yet Brexit’s right-wing figureheads – the likes of Boris Johnson, Michael Gove and Nigel Farage, along with their media supporters – have turned the issue into an exercise in self-parody. Serious content is absent. While the latest ruse is a campaign over pint glasses, of all things.

The ‘blue passport‘ episode highlighted Brexit’s shallowness. Trumpeted as a great victory by the gutter press, it later emerged that the UK was free to change passport colour while in the EU. No regulation prevented it. In other words, if blue passports are such a big deal, we could have had them without Brexit.

Despite the embarrassment this should have caused, right-wing Brexiteers were undeterred. A petition appeared online campaigning for the crown symbol to be reinstated onto pint pots used in pubs, along with the word ‘pint’. Apparently this disappeared during membership of the EU.

Is there a better emblem for Brexit Britain? Rather than being written off as the complete irrelevance it clearly is, the issue is considered serious enough to be publicly discussed by professional journalists. Unsurprisingly, former UKIP leader Nigel Farage was quick to join the tub-thumping. When Colin Brazier from Sky News suggested that pint glasses could be restored to “full British glory”, Farage quoted the tweet, adding “Absolutely. Sign the petition!”.

After the return of the blue passport, could the pint glass be restored to full British glory?https://t.co/iC90wGjJvG pic.twitter.com/xHVs8RYUjP

Not to be outdone, Secretary of State for the Environment and Vote Leave figurehead, Michael Gove also recently blurred the lines between politics and satire. Responding to questions about Brexit and food prices on 20 December, Gove urged British people to “be more patriotic about cheese”. He went on to state that his department was “very pro Cheddar”, before reeling off the names of several Cheddar varieties.

Of course, the referendum campaign in 2016 did not run on issues like this. But now, as the weakness of Britain’s negotiating position becomes clear, as David Davis and the rest humiliate themselves so regularly, caving in to every demand, this is the best they have.

Brexit cannot deliver on its headline socio-economic promises. That much is obvious now. Forget the bus, with its £350m a week for the NHS, forget the ‘Breaking Point’ immigration posters, forget Boris Johnson’s slogan of ‘taking back control’. The reality of Brexit is that it’s concerned with passports, pints and cheese.

Throughout its history, the EU has been a bank-led, corporate institution with a track record of investment in austerity. Yet none of this is discussed, because Tories don’t mind any of that. Instead, the Leave campaign lied through its teeth. In this way, that much-derided bus has become a metaphor for Brexit itself. It’s slow and clunky. It pollutes. It struggles to manoeuvre and it stops often, but somehow it still carries passengers.

There can surely be few people, even among Leave voters, who applaud Brexit’s current direction?

So, to return to the question at the top of this page – what does Brexit mean to you? If your answer is passport covers, beer glasses and some guff to do with cheddar, then you must be pretty pleased. And if not, you should be asking what can be done.

If the right-wing Brexit bus cannot be stopped, it must at least be forced to change route.