To deal with rising crime levels, Amber Rudd and the Tories should listen to these young people - The Canary 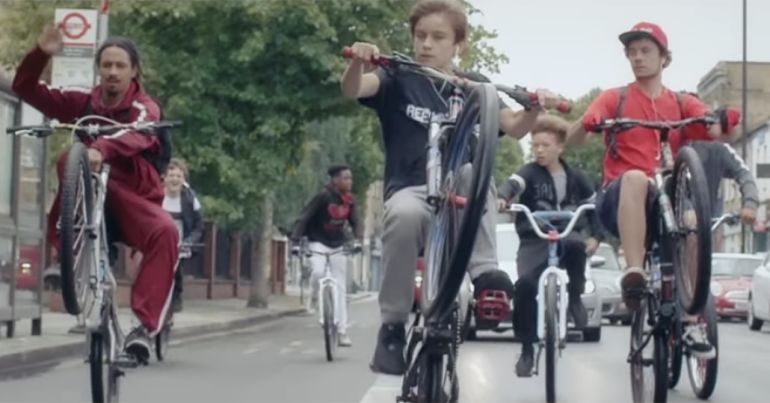 On Saturday 7 April, around 4,000 kids and young people on bikes brought London to a standstill. They took to the streets to draw attention to rising levels of street violence, and the tragic loss of life. Politicians continue to bicker about the root causes of street crime. But these young people have drawn attention to a crucial issue: the impact of cuts in services for the young under this Conservative government.

Bikes Up Knives Down

One of the most iconic images from yesterday’s #BikeStormz protest against knife crime in London. The @metpoliceuk & youths riding side by side.

Saturday’s #BikeStormz event was organised by 19-year-old “Jake100” and “MAC”. The ‘Bikes Up Knives Down’ movement started in 2014 and has support from the Metropolitan Police and the London Mayor’s Office. “MAC” told The Independent:

This is the biggest ride out for the youth against knife crime. We want people to put the guns down, put the knives down and for everyone to love their life, live their life and be peaceful and respectful. Never leave your house with a bad intention.

There was a powerful motive for Saturday’s ride:

Bikestormz are riding in memory of the 54 who have died this year on London’s streets. Tooley Street > Stratford. 12pm NOON. #bikesupknivesdown @Independent pic.twitter.com/xqNzGi1OzB

Support for the movement is growing as word spreads on Twitter:

As these young people make a powerful statement, their action should draw attention a stark fact. They have been “pushed out” of society:

Well it’s hard for our voices to be heard because we get pushed out by society and then this can cause conflict between us. The #BikesUpKnivesDown ride is a way for us to be heard and to get our message out there if you won’t do anything about knife crime we will.

Analysis by the Labour Party revealed that spending on children and young people’s services has been cut by nearly £1bn in real terms since 2012. Research for the most recent UK Youth Index found young people’s wellbeing is at its lowest level since the study was commissioned in 2009.

This government has targeted young people from the outset. In 2011 the educational maintenance allowance (EMA) was abolished. The EMA gave up to £30 a week for 16 to 19-year-olds from the lowest-income families to support them in education. George Osborne also cut child tax credits which were a financial lifeline for working families with children. And it doesn’t end there:

Spending on policing will, no doubt, dominate headlines for some time. It needs to be addressed, as do cuts to the fire and ambulance services, the NHS, education and social housing.

But it’s Tory cuts in their entirety that we need to be talking about to tackle not only the root causes of crime, but the state of our society in 2018. As this #BikeStorm showed, young people are not criminals. But these kids are incredibly wise. So as they take peacefully to the streets, let’s hope those in government start to recognise the true power of the next generation.