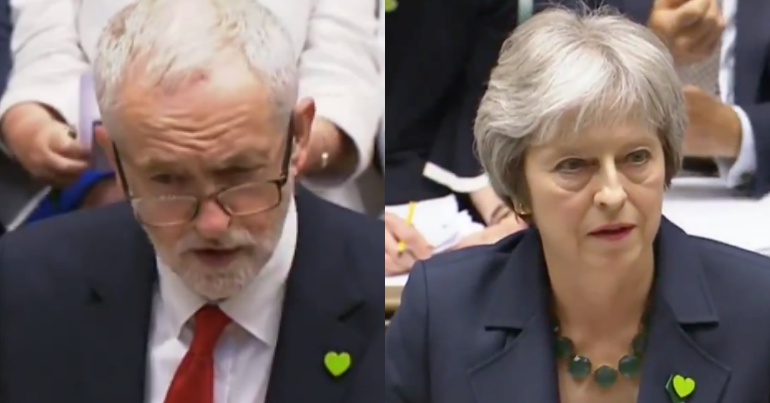 In PMQs, Corbyn referred to Boris Johnson’s recent leaked private dinner conversation in which he suggested Donald Trump would handle Brexit better than his boss, Theresa May. The Labour leader asked:

Mr Speaker, when the prime minister met President Donald Trump last week, did she do as the foreign secretary suggested and ask him to take over the Brexit negotiations?

While MPs from both the Labour and Conservative backbenches erupted with laughter, May appeared to be less than impressed. Sitting a few seats across from the prime minister, foreign secretary Boris Johnson was also laughing.

#PMQs
Jeremy Corbyn: "When the Prime Minister met Donald Trump last week, did she do what the Foreign Secretary suggested and ask him to take over the Brexit negotiations?'"#BojoTheClown pic.twitter.com/HVdPZsNC93

Oh, Jeremy Corbyn! That was brilliant: "when she met President Trump last week did she do what Boris Johnson asked and ask him to take over the Brexit negotiations?" Huge laughter + May looks absolutely fuming #PMQs

Following Jeremy Corbyn's opening zinger, Theresa May has the face of a condemned woman, whilst Boris clearly knows his fun is only just beginning. #PMQs pic.twitter.com/WlmcbR3i58

Priceless. She was fuming 😤 😏

She wasn’t happy with that one 😂😂

"Corbyn’s best PMQs in months, May’s worst. His questions were precision targeted, and he followed them up. Her answers were vague, and she sounded rattled."
That's from The Sun, folks. 😲
Need my medication and a lie down. #PMQs

While Corbyn’s question about Brexit and Trump was met with widespread laughter, it also highlighted the government’s continued lack of unity on Brexit. And it came just a day after May had to see off a Conservative rebellion on Brexit by making a series of concessions. No wonder the PM didn’t like it.