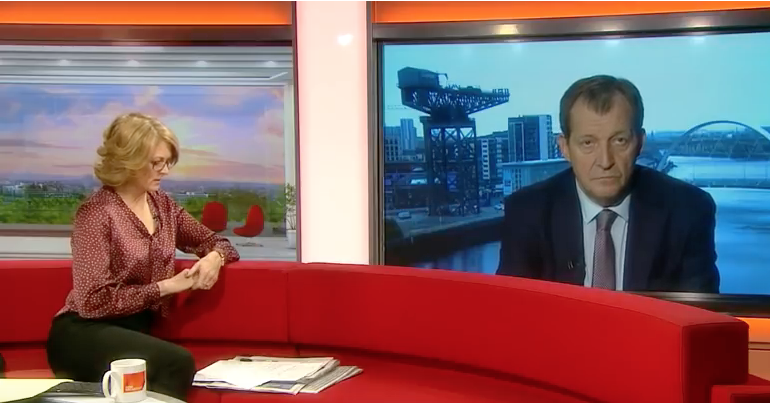 The morning after the People’s Vote march against Brexit, Alastair Campbell awoke with a sudden concern about BBC impartiality. But he picked on the wrong BBC producer, who quickly pointed out the irony of Campbell painting himself as a fan of democracy.

According to the Guardian, around 100,000 people turned out for the march demanding a final vote on the Brexit deal. These are disappointing numbers for a well-publicised, establishment-backed protest. In fact, it’s only one-tenth of the number who marched against the Iraq War in a single day in 2003; a war Campbell was pivotal in promoting.

Unlike recent protests related to austerity, the Remain march received outsized coverage in the media. But not enough for Campbell, who tweeted his annoyance at The Andrew Marr Show producer Rob Burley.

Campbell demanded to know why there was no representative from the march on the show on 24 June. Moments later, he got his reply:

Checked what was on Frost the morning after the 2003 Iraq war march. The pro-march voice was Mark Seddon (in papers) and you yourself put up Defence Secretary John Reid explaining why you would be pressing on irrespective of the size of the march the previous day. https://t.co/HPR0vJrvnw

Burley is right. Campbell’s sudden passion for democracy on Brexit is impossibly short term. Campbell spear-headed the PR effort that helped draw the UK into the invasion of Iraq despite the unprecedented public protest against it.

15 years on, Campbell goes on one march and portrays himself as a social justice warrior.

Years after the assault began, Campbell continued to defend the disastrous invasion. In fact, here’s Campbell doing that job, on The Andrew Marr Show, in 2010.

When Campbell had the power to bring people’s voices into government, he didn’t. Instead, he aided and abetted an unjust war, the ramifications of which are still resonating today. And he did so against the will of the British public. Brexiteers might just have a point when they demand to know what’s different now.

A so-called #PeoplesVoteMarch led by politicians who supported neo-liberalism & austerity, who inflicted on people hardships that produced a huge backlash against the political elite, asks 'where's Jeremy Corbyn?' And so lacking is there self awareness, they don't see the irony.

This is exactly why I think Labour's current Brexit strategy is spot on. Intolerant, abusive, hectoring and downright nasty FBPE accounts who are unwilling to countenance any opinion other than their own. Just as bad as the Hard right Brexiteers they claim to oppose. https://t.co/lzQvex9s2x

He's visiting the Zaatari camp for Syrian refugees and the Al-Baqa'a refugee camp where over 100,000 Palestinians live, arguing passionately for Palestinian rights. Where's your Dominic Grieve? Or your Heidi Allen? Or the rest of your Tory 'rebels'? https://t.co/OypVvSh5VK

The best thing centrists can do for the anti-Brexit movement is leave it.