One tweet exposes the DWP for the monstrosity it is - Canary

A tweet about the Department for Work and Pensions (DWP) has blown up on social media. And rightly so – because it sums up the department’s monstrous treatment of so many people. But it also acts as a signal of hope.

As The Canary previously reported, a Twitterstorm was organised on Thursday 30 August at 7pm. Using the hashtag #DWPCrimes, people tweeted their experiences of the department, sharing news and encouraging others to do the same. By 9:30pm on 30 August, there had been around 22,000 tweets: 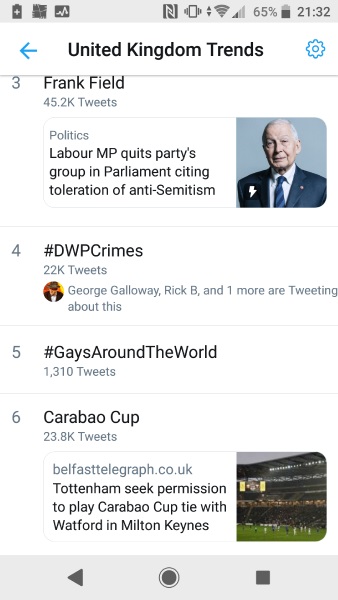 But one tweet from a relatively unknown, non-political user caught many people’s attention. It was about the person’s father, who previously received Personal Independence Payment (PIP):

My Dad minutes from death the night he fell ill just after been told he was fit to work we then found out he struggled to walk because of heart failure but because he could take steps of course he was fit for work! Now they’ve taken his PIP off him #DWPcrimes @DWP pic.twitter.com/txfwcbNKi9

Shanice posted a message from her dad explaining what had happened to him. He said:

My heart is only pumping at 25per cent and I can only walk very short distances. My life is seriously impaired but I’m lucky to be alive. But now after a assessment the dwp, to add insult to injury have kindly stopped my pip payments!

#DWPcrimes posted on behalf of my Dad we’ve been through heartbreak this year I watched him minutes away from death I suffer every day not knowing if it’s his last panicking every time he takes to long to reply to a text. lost his money because he’s “not sick enough” @DWP pic.twitter.com/PvFmkwVQuK

Hundreds of people shared Shanice’s tweet, and offered her messages of support and advice.

As The Canary previously reported, PIP has been replacing the Disability Living Allowance (DLA) since April 2013. Since then, the DWP denied PIP to around 381,000 people who used to get DLA. But people can appeal the DWP’s decision at a tribunal. In 2016/17, these tribunals overruled 65% of the DWP decisions they heard.

For Shanice’s dad, the situation has now got even worse. Because since the Twitterstorm, the DWP has told her dad that it will also be cutting £64 a week from his Employment and Support Allowance; leaving him with barely enough to live on.

But their story, while cruel and heartbreaking, does also show something else: social media can be a powerful and positive influence.

I’m not a particularly political person, but I’ve been more involved since the [DWP’s] treatment of my dad.

The photo was taken on 2 November 2017. Leading up to that he’d been struggling to walk and had a few things wrong with him. He’d scored zero points on a fit for work assessment, and was having to rely on me. I was helping with money so he could get gas, electric and food. He was also having to search for jobs in the state he was in.

It was my dad that came across the #DWPCrimes hashtag. He rang me to tell me about it; I think he found it through Google News. He’s had another assessment for PIP recently. It took a few months to hear back; in fact, he had to ring to see what the results were. The letter just arrived this week and he scored zero points again.

He is not going to get better; he can barely walk and if he does he has to stop every few yards. The doctor at the hospital told him he must stop every 20 yards. His heart is only pumping blood at 25% which is past severe impairment. He gets out of breath just sitting. Also, he has recently developed anxiety and panic attacks; something he’s never had. He didn’t know what was wrong with him. It broke my heart to see. It’s a form of PTSD from what he’s been through with being ill. When he said his PIP had been stopped I was going to turn to Twitter and then a couple of days later we found out about the #DWPCrimes storm so I said ‘Right, I need to get this posted’.

The power of social media

Shanice and her dad’s story sum up what Twitterstorms like the #DWPCrimes one are all about. Many people on social media are already politically engaged and aware of what the government and its agencies like the DWP are doing. But many are not – so many people suffer in silence. They may not realise there’s a whole army of people out there, in similar positions – but actively fighting back, too.

Shanice and her dad are a humbling example of the power of social media, and how it connects us with others in similar positions. Now thousands upon thousands of people know about their situation. And they also know what the DWP has done to them.

– Check out the #DWPcrimes hashtag, support the blogs Universal Credit Sufferer and The Poor Side of Life and get involved with Disabled People Against Cuts (DPAC), fighting for disabled people’s rights.