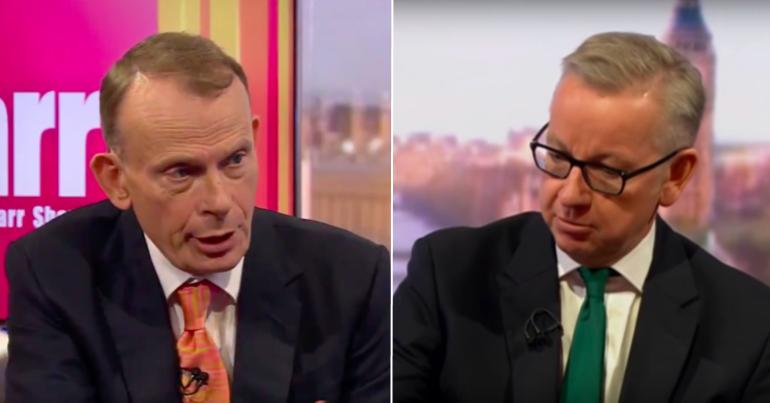 Andrew Marr left Michael Gove squirming on live TV as he drilled down on Conservative support for Europe’s “most prominent antisemitic politician”.

Gove refused to condemn the far-right Hungarian PM Viktor Orbán or his party’s support for him. Instead, the Conservative minister called for “solidarity” on the issues that matter.

In recent years the Hungarian PM has described migrants as “poison”. His successful 2018 re-election campaign was condemned as blatantly antisemitic.

The European parliament voted to enact Article 7 on Orbán’s Hungary last week. This opened the door on sanctions for damaging democracy and not upholding European values. The Conservatives whipped MEP’s to vote against the motion.

Questioning Gove on The Andrew Marr Show, the BBC host laid bare the facts surrounding the Hungarian PM. Calling out Orbán as antisemitic and xenophobic, Marr asked about the Conservative’s recent support for him in the European Parliament.

Gove attempted to deny that his party backed the Hungarian PM, before flat out refusing to condemn the far-right leader:

Responding to Marr’s accusations that he wouldn’t condemn Orbán as he needed his support, the environment secretary said:

No, because I think that it would be wrong for me, at a time when we need solidarity against a number of different threats – you mention antisemitism – we need to make sure that our voice is clear, our position on these issues is absolutely… clear and resonant, and I don’t believe that individual criticisms of the kind that you are understandably attempting me to make, necessarily help us in ensuring that we get both solidarity in issues that count and the best deal for Britain as we leave the European Union.

Taking Gove to task once again, Marr questioned the Conservative’s stance on antisemitism. The BBC host mentioned the scrutiny Jeremy Corbyn has faced on the issue, before saying (time 0:55):

Here you are, as a party, voting alongside the most prominent antisemitic politician, xenophobic politician, someone who as I said earlier has described migrants as “poison”, and that’s been the Conservative party’s position.

Gove on #Marr says the UK should show "generosity of spirit" to the far-right, anti-semitic and Islamophobic Hungarian PM, a few days after the Tory MEPs backed the Orban in the European Parliament. Complete moral bankruptcy.

There was an air of disbelief on social media following the interview. But people were quick to point out the glaring hypocrisy of Michael Gove’s stance:

Is it me, or did Michael Gove argue that the best way to stand up to anti-Semitism is not to criticise anti-Semitic Hungarian leader Viktor Orban? #marr

Marr:
“You voted with Orban, a well-known antisemitic and racist far right dickhole”

*Gove nods*
“Yes other people also voted with the racist which somehow makes it ok.”pic.twitter.com/FaA7vthV0v

It didn’t take long for people to take apart Gove’s “solidarity” calls either:

Gove: “We need solidarity against a number of different threats including anti-semitism, which is why we voted to support notorious far right, islamophobe and anti-semite Orban" #marr

For the Conservatives to have any authority on anti-racism, they must practice what they preach. But not only have senior figures refused to condemn the far-right leader, they have also voted to support him. This is particularly galling after Theresa May accused Corbyn and Labour of racism at PMQ’s this week.

As John Shafthauer wrote in The Canary on 14 September:

The Tories supported a tinpot Mussolini in full public view – how is that getting less attention than the time Corbyn didn’t quite bow enough?

Andrew Marr done well to put Michael Gove on the spot. It’s time this Conservative government is properly held to account for such blatant hypocrisy.