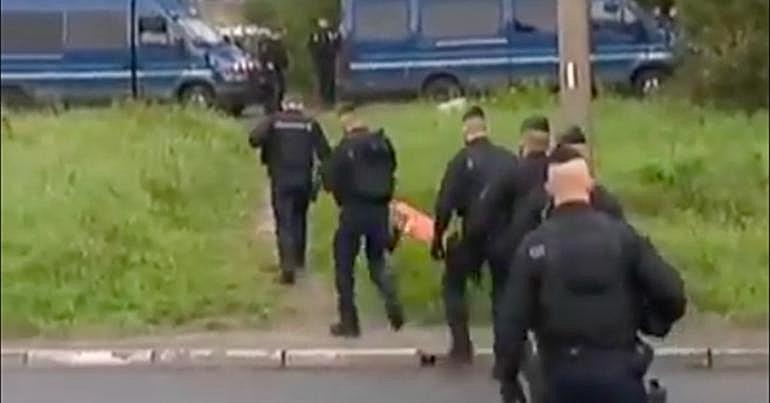 Serious police abuses have taken place in the French port city of Dunkirk this week, aid organisations have claimed. The accusations follow the mass eviction of people, mostly Kurdish-Iraqi refugees, from a camp on the outskirts of the city.

Aid groups in northern France say police are using non-lethal weapons such as pepper spray and tasers to clear people from the area.

Dunkirk sits just across the channel from south-east England. It has been home to refugees and migrants hoping to reach the UK for many years. Aid groups told The Canary that police evicted around 800 individuals from the camp on 6 September. There are now said to be around 600 people in the port city with no settled place to sleep.

The UK government has spent more than £150m on security around border ports in north-west France since the Calais “Jungle” camp was cleared in 2016.

Around 200 officers were involved in the clearing of the estimated 800 people on the site at Grande-Synthe. Officials rounded up 400 people, including almost 100 children and 60 families, onto buses destined for alternative accommodation. But by midnight, two buses had returned, as there was allegedly no space in the accommodation centres.

Aid organisation Help Refugees told The Canary that some people on the buses had no food or water for the entire day. Upon the return of the buses, it says over 400 people were then “left on the streets to fend for themselves”. According to the charity, police surrounded the former campsite in a perimeter, leaving no access to water.

The group estimates there are now around 600 people in the area with no safe site to sleep, including families and babies. One member of the organisation working in the region told The Canary that police have pushed a large number of people into the woods.

On 13 September, the Refugee Women’s Centre in Dunkirk said that hundreds of men were “sleeping scattered” in an abandoned warehouse. The aid group also claimed the local government has not allocated former residents of the camp an area to bed down, describing the conditions as “inadequate and hostile”.

Help Refugees told The Canary that teams on the ground have witnessed “serious” acts of police violence since the evictions began. The group said it has also had reports of police using tasers – both directly and to threaten people.

The Women’s Centre relayed similar stories of alleged abuses on social media. These included police using pepper spray and confiscating the shoes of four men. The group also reported men having their hands zip-tied and being numbered on the backs of their necks. One social media post from the Women’s Centre stated that the “abuse of power is haunting”.

Human Rights Watch (HRW) released an in-depth report on police abuses in the area in July 2017. The document claimed that police abuse of refugees and migrants was routine in the port city of Calais. The international rights organisation also accused authorities of turning a blind eye to police behaviour.

French state officials admitted the HRW report was “plausible” after an internal inquiry. Officials also accepted the likelihood of the police’s “disproportionate, indeed unjustified, use of force”.

The Canary has contacted the local government in Préfet Du Nord for comment on the recent allegations, but had not received a response by the time of publication. A local government official had previously told AFP that the eviction went smoothly.

Instead of looking to further resettlement programmes for the refugees and migrants in the region, the UK government has been pouring money into stopping people coming across the channel into the UK. The security measures financed by the UK total over £150m. They include a 1km border wall in Calais, as well as CCTV and detection equipment.

Despite not signing up to EU-wide resettlement schemes, the UK did bring in one praised scheme in 2016. The Dubs amendment signalled a change in direction, with the government promising to resettle 480 unaccompanied minors from camps in Europe. However, two years on, over half those places remain unfilled.

Recent news did give campaigners reason to be optimistic, though. The government announced on 13 September that 549 minors reunited with their family in the UK when Calais was bulldozed have been given the right to remain indefinitely.

However, politicians and activists were quick to highlight a ruling from the Court of Appeal in August. Judges found the Home Office had denied entry to 1,300 children from the Calais camp without adequate reasoning. The court claimed the government’s handling of the cases was “unfair and unlawful”.