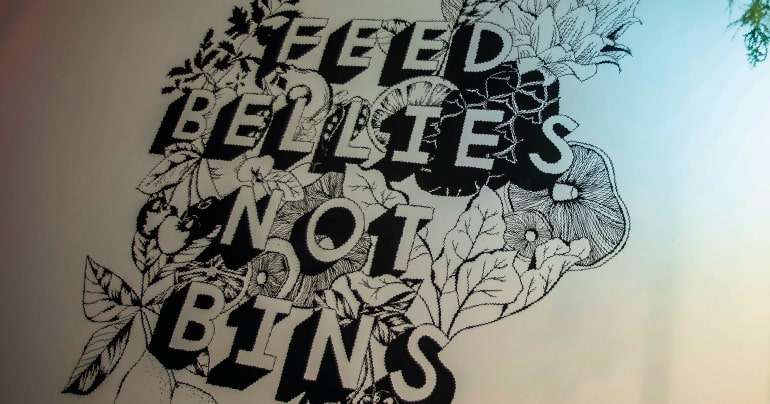 Food waste is a massive problem. Globally, we bin about a third of everything we produce. This isn’t just a waste – it’s also bad for the environment. Lots of great schemes have arisen in the UK to tackle the issue, but perfectly good food can still be viewed as “second class”. One group in Manchester has tried to change the way people think about ‘waste’ food. It’s now trying to turn the idea into a catering service that will see corporate customers subsidising charities and communities.

The Canary caught up with Open Kitchen MCR to find out about its new crowdfunder.

The latest project developed from a food waste restaurant called Real Junk Food MCR. The new plan is to:

offer a range of outside catering services, all using food that would otherwise go to waste… The new venture aims to offer professional catering services to corporate and private clients, while working with community and charity partners to continue to offer access to not just enough food, but great food, to everyone who wants or needs it, regardless of income.

Real Junk Food Manchester was a restaurant in the city’s centre. It operated on a ‘pay-as-you-feel’ basis, but the group’s organisers were:

very aware that not everyone can get into the city centre. By starting a catering social enterprise we will be able to produce more meals, and work with charity and community partners to provide more meals to more people across the city.

In contrast to the restaurant, Open Kitchen MCR will:

use a different type of economic sharing model. Rather than pay-as-you-feel, which operated at the restaurant, the new venture will offer a range of pricing packages that will mean corporate customers will subsidise our work with community and charity partners. So, companies and individuals who choose our catering service will not only be choosing a sustainable option, they will also be supporting Manchester communities.

The Canary asked Bell how she came to be working with waste food:

There are lots of projects out there using food that would go to waste to make meals, and a lot of them focus on people who are in food poverty. While we’re never criticising these projects, they do essential work, there is always a worry that the undying message becomes, ‘second class food for second class people’. These projects also add to the economic segregation that is now a normal part of our culture – If you have money, you go where you want and eat what you want, and if you don’t, you get sent somewhere separate, and you get what you’re given.

We wanted to create a positive mainstream social setting, with a consistently great food offer, and find a way to include everyone, regardless of income. It also feels like a way to make the point that the food that is wasted isn’t second rate, it’s wasted because of cosmetic standards, logistical issues, labelling errors, etc. The sustainability and social messages really echo each other – this food and these people are not second class, and shouldn’t be thrown away.

She also talked about her experience running the restaurant:

It’s interesting to see, when you remove money as the barrier to being part of a mainstream social setting, the range of characters you get. Our customers have included everyone from students, professionals, people who are street homeless, retired people, asylum seekers and refugees and lots more. It’s been amazing to create a space where a genuinely broad range of people from a huge range of backgrounds can sit together. It’s not always easy, and people continued to surprise us until the last day, but to say we created a culturally diverse space doesn’t quite do it justice. I’m very proud of that.

Food waste is a huge problem, as these figures from Friends of the Earth show:

Manchester’s first waste food pay-as-you-feel restaurant was open for 50 weeks, and in that time we stopped 34,339 kilos (or just over 34 metric tonnes) of food from going to waste, and served 29,128 meals to people from all walks of life across our city…

Opening a new larger venture will allow us to rescue even more food from being wasted! For every tonne of food that we stop from going to landfill, we stop 4.2 tonnes of CO2e from being emitted. Food waste rotting in landfill releases huge amounts of methane, which is 25 times worse for climate change than carbon dioxide. The lowest carbon, most sustainable thing we can do with food that will otherwise go to waste is put it in a belly, not a bin.

People who want to support Open Kitchen MCR can do so via the crowdfunder. Manchester-based businesses and individuals can also use the crowdfunder to arrange sustainable catering packages. Anyone doing so doesn’t just support the business getting started, they also help give Manchester a equitable catering option that promotes sustainability: 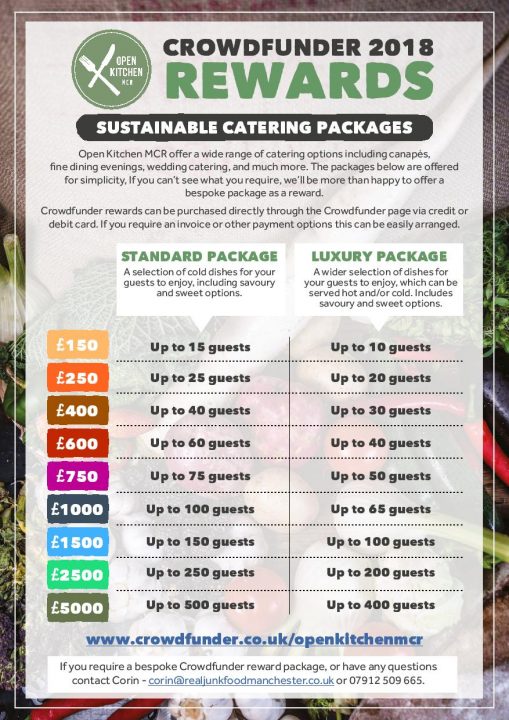 Food waste is a global problem, but it’s one that can be tackled locally. With the government failing to tackle the issue, projects like Open Food MCR are vital. Especially when the emphasis is on making the project longterm and fit for everyone.

– You can support the Open Kitchen MCR crowdfunder here.

– Businesses and individuals in Manchester can also support the project through sustainable catering packages.

– Learn more about food waste and what you can do about it from Friends of the Earth.