Social media has led the charge for a huge workers’ strike. Staff from five companies have held a day of action, called ‘FFS410‘. And bringing up the rear of the protest was one John McDonnell, Labour’s shadow chancellor.

As The Canary has reported, both McDonald’s and TGI Fridays workers have taken strike action before against their bosses. McDonald’s staff walked out over pay, contracts and conditions. Meanwhile TGI Fridays staff held the first ever UK strike over tips.

But since then, the Bakers, Food and Allied Workers Union (BFAWU), which represents fast food staff, organised a day of mass action on 4 October. As The Canary‘s Brian Finlay reported, JD Wetherspoons workers joined McDonald’s and TGI staff, along with workers from Uber Eats and Deliveroo.

The ultimate goal of the strike? To get these companies to pay staff £10 an hour. That, and the date, is why the hashtag is #FFS410 – Fast Food Strike 4 10. As Finlay wrote:

In hospitality, financial insecurity is rife for workers due to low pay and… zero-hours contracts. Trade union membership is also historically low among workers… However, the BFAWU feels campaigns like this can turn membership levels around.

So, the FFS410 action went ahead. And the support it got on social media was massive.

Loads of Labour MPs and trade union leaders showed their support for FFS410:

Solidarity with hospitality workers at TGI Fridays, Wetherspoons and McDonalds plus Uber eats and Deliveroo joining together today today to strike for fair pay and fair treatment at work #FFS410 https://t.co/Mrv2l11gVC

Solidarity with fast food workers tomorrow, striking for fair pay. As a young shop steward on the docks I fought with others for the rate for the job. These hospitality workers remind me of then and why unions are as relevant as ever in giving the faith to fight injustice #FFS410 https://t.co/a6KaIzXJ3E

Solidarity with all those taking part in #McStrike today. The companies you work for are utterly dependent on you to generate their profits. It's about time they recognised that.

And one of the other hashtags people were using, #McStrike, was trending along with #FFS410: 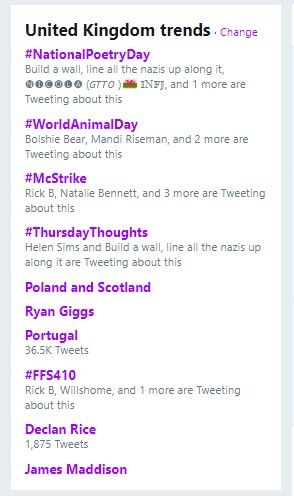 There were great scenes at the sites of FFS410 action:

Wetherspoons workers have walked off the job to demand £10/hr & a union. The #SpoonStrike has begun! Fast Food SHUTDOWN #FFS410 pic.twitter.com/xDLLYVZ2XU

'If we don't get it, SHUT IT DOWN!' as McDonald's workers in Brixton strike for £10/Hr and a union #FastfoodGlobal #McStrike #FFS410 pic.twitter.com/njSJ5UvTlH

This is what a #McStrike looks like! Let’s get these guys thousands of retweets today in #Solidarity pic.twitter.com/F05yB2WoQ2

Staff at Uber Eats, Wetherspoons and McDonald's have gone on strike over pay. #McStrike https://t.co/QqkrPROahn

And as writer Liam Young noted, McDonnell was not messing around with his support for FFS410:

If you want to reflect on how far we’ve come in three years, John McDonnell, the People’s Chancellor, says a memo has been sent to all Labour MPs today informing them that if there is a picket in a constituency it is the MPs responsibility to join it ?? #FFS410 #mcstrike

McDonnell said at the demo at Leicester Square:

The Labour Party is 100% behind these strikes, the demonstrations… to achieve just a decent pay rise and to achieve decent conditions at work… We’ve made it clear. When we go into government: £10 an hour, real living wage, introduced in the first Queen’s speech…

The reality of fast-food work

But it’s the voices of the workers which make the strongest point for FFS410. McDonald’s worker Lauren McCourt told the Trades Union Congress (TUC):

Poverty wasn’t just a word to me – I was living it.

I knew that if the manager decided to take shifts away from me I would end up homeless. And all the workers at my store were struggling just the same.

Everyone I worked with was barely making ends meet. People were working 12-hour shifts every day just to make their rent – and 7 days a week because the free meal we got on our break was the only way we could feed ourselves.

So when one worker bravely walked out of her store to mark the start of the strike, I decided to take part in the action too.

It is this kind of solidarity that makes real change at work happen. It only takes one worker to get thousands on board. So McDonald’s, TGI, Wetherspoons, Uber Eats and Deliveroo: it’s your move now.

– We all deserve fair pay and good working hours. Be part of that change, join a union.