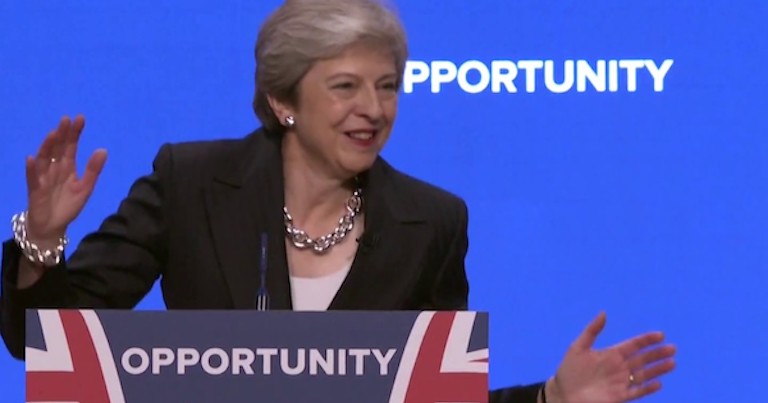 On 3 October, prime minister Theresa May gave her keynote speech to the Conservative Party conference. So on 4 October, this made the front page of nearly every major newspaper. The trouble is, the headlines have little to do with any policy statement. Instead, each and every one of them covered the fact that she danced in. Badly. While ABBA’s Dancing Queen blared through the conference hall.

The reaction across social media was spectacular. Amd one person’s response, in particular, is just delicious.

Many people pointed out that May didn’t even choose the most appropriate ABBA song to start with:

Really? I doubt the band’s long-earned reputation will ever recover. SOS or Waterloo would have been more appropriate. Or indeed Money Money Money. In Brexit Britain it’s a rich man’s world.

More appropriate ABBA songs for Theresa May to dance to while taking the stage for her speech:

Money, Money, Money
Hole In Your Soul
I'm A Marionette
Winner Takes It All
Our Last Summer
Gimme Gimme Gimme
Should I Laugh Or Cry
Slipping Through My Fingers
Waterloo
SOS#CPC18

But in a stroke of utter genius, Theresa May Dancing to Stuff popped up on Twitter and remixed her ‘dance’ to a brilliant range of well known songs.

For example, there was Sound of Da Police, by hip-hop giant KRS-One:

Perhaps a discrete nod to the total denial that there’s any link between Tory cuts to policing and rising crime figures?

Then there was the glorious theme tune to Thomas the Tank Engine:

Since the Conservatives came to power, the UK’s privatised railway system has collapsed into total chaos. And too many people can’t even afford UK rail fares, now the most expensive in Europe. Even Thomas probably hopes that Labour comes to power soon, as it promises to re-nationalise the railways.

May also ‘sashayed’ in on The Imperial March from Star Wars:

This is perhaps the most appropriate song for anyone suffering under the government’s Universal Credit policy, which is forcing people further into poverty and out of their homes. Too many sick and disabled people are also dying under Universal Credit.

Amongst many others, there is one tune that needs no introduction: Liar Liar, by Captain SKA:

These ‘Theresa May Dancing to Stuff’ tweets are brilliant. But no matter how much they might make us laugh, her dance was truly sinister:

Just imagine if Corbyn had presided over 120,000+ deaths because of his policies and came on stage dancing, laughing and joking? There would rightly be uproar. But Theresa May gets lauded and fawned over. #ToryCutsKill

There was nothing in May’s speech that offered any hope to the millions of people who’ve been savaged by Tory austerity policies. Because it’s not the first time she’s promised an end to austerity. And since then, nothing has changed:

It seems that the most May can offer the UK is a truly cringeworthy dance. It’s not enough. It’s time for her and the Tories to go, and they can dance out to whatever tune they want.