The Maybot isn’t fooling anyone. See the reaction to Theresa May’s dance at the Tory conference. - The Canary 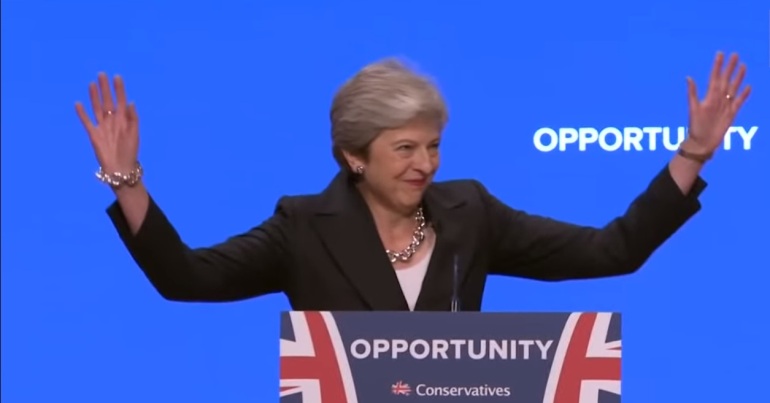 At the Conservative Party conference, PM Theresa May made waves when she came on stage to deliver her speech. She did so by ‘dancing’ on the stage to the tune of ABBA’s Dancing Queen.

May’s supporters described the move as self-deprecating humour, and praised it for being bold and funny. Critics, however, are decidedly unimpressed:

Theresa May dances on the grave of our hopes and dreams for the future. #ToryConference pic.twitter.com/Bj3AT4NP2V

People are also describing May’s awkward dancing as a PR stunt which distracts from real issues:

The media: THERESA MAY DID A DANCE!!

Not least of these issues is Brexit. Especially since no one is particularly clear on what May’s plan is, least of all May herself:

don’t think your dancing is distracting us from your arsewipe politics and brexit bullshit because it isn’t, it really isn’t @theresa_may https://t.co/HPcN5Ei7jM

Even some Tory supporters are unimpressed:

If Rome burnt whilst Nero fiddled, then Brexit is burning whilst May dances. Assuming the Conservative Party intends to survive this leadership, it's time to end it.

And while May might think her ‘hostile environment’ policies have been forgotten, the internet never forgets. Especially with the Windrush scandal still fresh in people’s memory:

Watching the news you really gotta hand it to Theresa May. Whether it's dancing into conference or deporting the Windrush generation, she just doesn't give a fuck. Admirable in a weird way

I dunno what it is but even after her wonderfully self-deprecatory dancing today just can't warm to Theresa 'Windrush Scandal' May, can't find it in myself to start liking Theresa 'Hostile Environment Send Out The Immigration Vans And Racist Billboards' May.

Of course, austerity measures are also contributing to the outrage. In the face of deaths caused by austerity, May’s dance appears downright flippant:

To all the people who have lost their lives or loved ones, been evicted, had benefits slashed or any of the other myriad misfortunes forced upon them by #austerity For @theresa_may to dance out to deliver a speech telling people ‘it’s ok, it’s over’ is repulsive. #ToryConf18

Super-Rich billionaires have been given tax cuts, while the rest of us pick up the bill. Austerity has killed people. Over 14m are now living in poverty. Foodbanks can’t keep up with demands. How can Theresa May stand on the stage and dance when people are dying.

From the reaction to the ‘Maybot’ – as the dance is now being called – it’s clear that May’s dancing skills are the least of her worries. The dance may, in fact, have backfired, because people hate having their intelligence insulted. And it will take more than a public show of awkwardness to distract people who have been suffering nearly a decade of Tory austerity.

– Write to your MP, asking that they support an anti-austerity agenda and demand accountability for Windrush and Grenfell victims.

–  Support the Canary if you appreciate the work we do.