In one sentence, Noam Chomsky helps expose how fascists are taking power around the world - The Canary 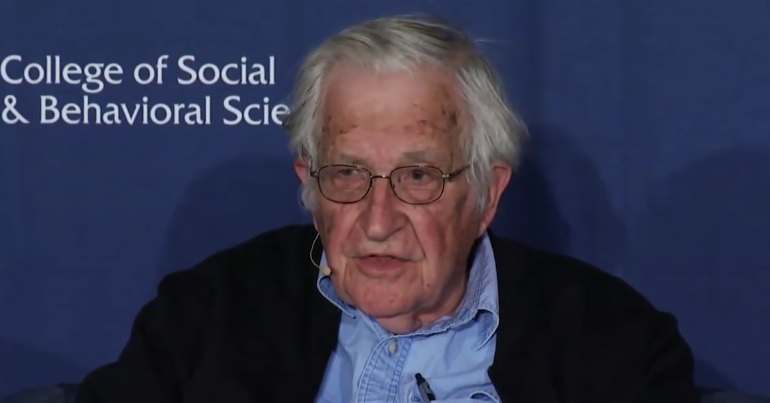 A manifesto signed by Noam Chomsky and several other intellectuals speaks out against the global rise of the far right. And one sentence in particular gets right to the root of why fascism is once again gaining power.

To act against fascism, we need to understand its rise

The manifesto states that, in today’s world:

extreme right-wing leaders are on the rise and even govern, via voting marked by frustration with the 2008 crisis and neoliberal austerity.

Chomsky has explained the link between neoliberalism and the rise of the far right in more detail previously, saying:

right before the crash – 2007 – at the peak of what economists considered a ‘great economic miracle’, working people in the United States had salaries that were lower than they were 25 years earlier, before the neoliberal programmes were initiated. And that’s pretty common around the world… And these programmes… severely undermined democracy…

The result of these processes is people are angry, disillusioned… A lot of this turns into scapegoating – blaming people who are even more vulnerable than you are, like immigrants.

This latest manifesto, however, comes at a point when yet another far-right politician is on the cusp of power. It warns that the next president of Brazil – Latin America’s largest economy – could well be a “fascist, racist, chauvinist and homophobic candidate, one who calls for violence and armed repression”.

Neoliberalism: the capitalist extremism that led us to this point

As CorpWatch describes, neoliberalism is about “the rule of the market”; cutting public spending on social services; deregulation; privatisation; and “eliminating the concept of ‘the public good’ or ‘community’”. Essentially, it’s the ideology behind austerity.

And journalists and academics have been warning us about this dangerous doctrine for many years now. We’ve heard that:

Yet for some reason, we still haven’t freed ourselves from its tentacles.

The choice facing us is simple…

Neoliberalism and its austerity policies were not necessary. As Danny Dorling told The Canary in 2017, the Conservative-led government in Britain didn’t need to give tax breaks to their wealthy friends while squeezing the income of the country’s poorest citizens. It wasn’t an economic necessity. They chose to do it. And they chose to do it in spite of all of the evidence against the doctrine and the inequality it creates. As economics professor Danny Blanchflower argued in 2017:

Amid a situation in which establishment parties like the Conservatives refuse to permanently abandon neoliberalism – and keep fuelling the rise of fascism in the process – we’re left with two clear alternatives:

He’s right. Neoliberalism is clinging onto power around the world, but it’s slowly dying. And if we don’t want fascists to step into the vacuum it leaves behind, we must step up right now and fight for a real alternative.

– Support grassroots action against far-right activities in the UK. And read The Canary‘s extensive coverage of such activities.