The Department for Work and Pensions’ (DWP) flagship benefit is facing criticism from a charity on the front line. It comes with some staggering data about food-bank use. But the charity giving the DWP this criticism doesn’t appear to be going far enough in its solution to this crisis.

The DWP: benefits under fire

The DWP’s flagship but controversial new benefit replaces six old ones (known as “legacy benefits“), with one payment. Currently, what’s known as “live service” Universal Credit has been rolled out in certain areas for new claims. Eventually, the DWP will move everyone onto “full service“, including those on legacy benefits. This process is due to start in 2019.

The Trussell Trust is the UK’s largest food-bank network. Its own figures show that: 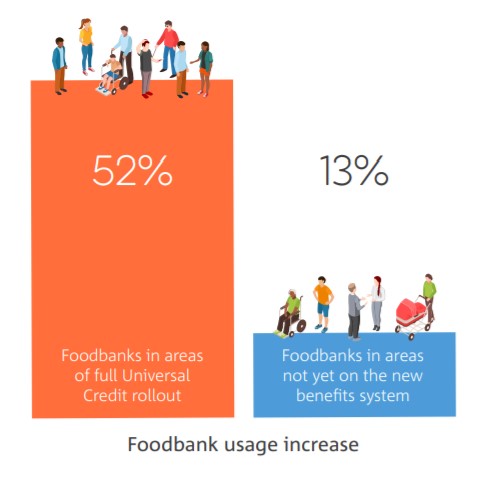 Its chief executive Emma Revie warned the DWP that:

We created our benefits system in this country to free people from poverty, not lock them into it. As we look at… the next stage of Universal Credit, we’re really worried that… foodbanks could see a big increase in people needing help. Leaving three million people to wait at least five weeks for a first payment… is just not good enough.

But it’s the Trussell Trust’s data that makes for damning reading.

The reasons for people going to food banks have changed. The Trussell Trust has seen a fall in people coming due to ‘benefit delays’; but an increase due to ‘benefit changes’:

Digging further into the data shows that the biggest type of benefit change that was sending people to food banks was “change to different benefit”: 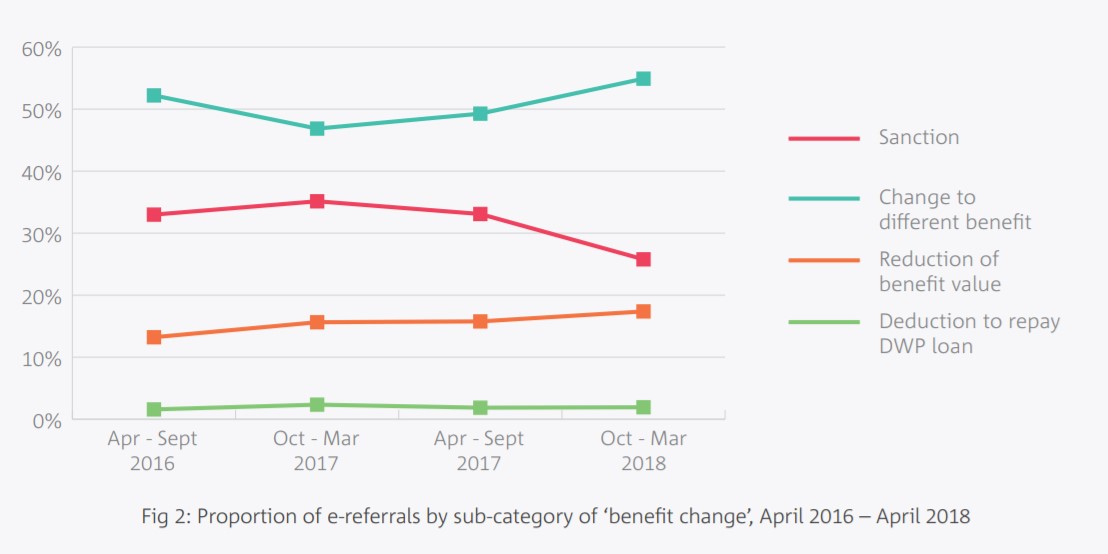 A similar pattern, pointing to people moving onto a new benefit, was seen in ‘benefit delays’: 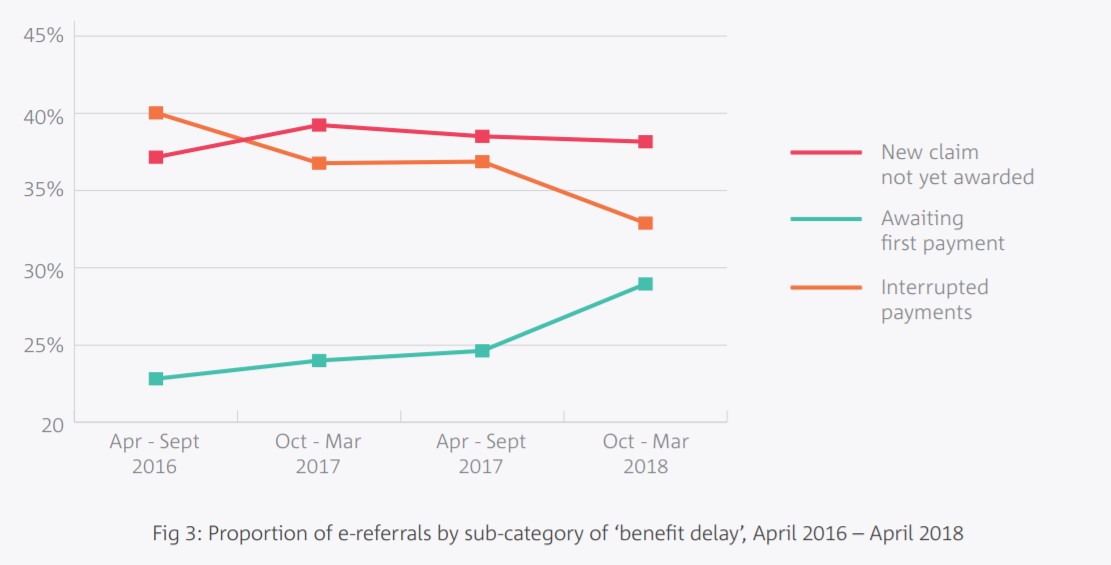 Crucially, the Trussell Trust’s data showed Universal Credit coming out top when people went to a food bank because of moving onto a new benefit: 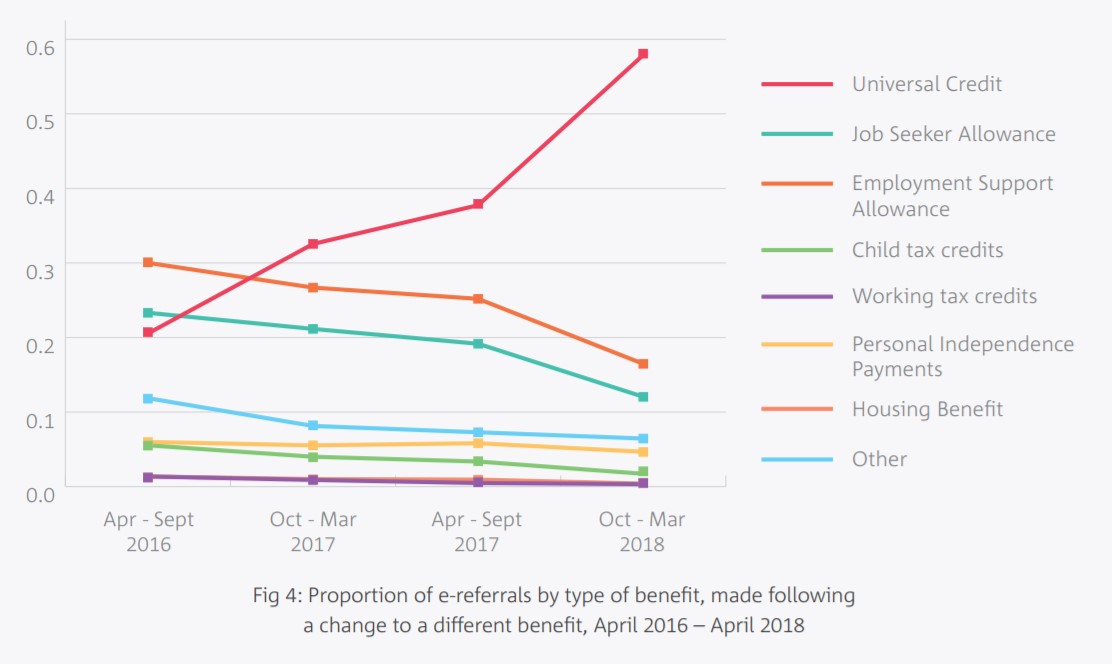 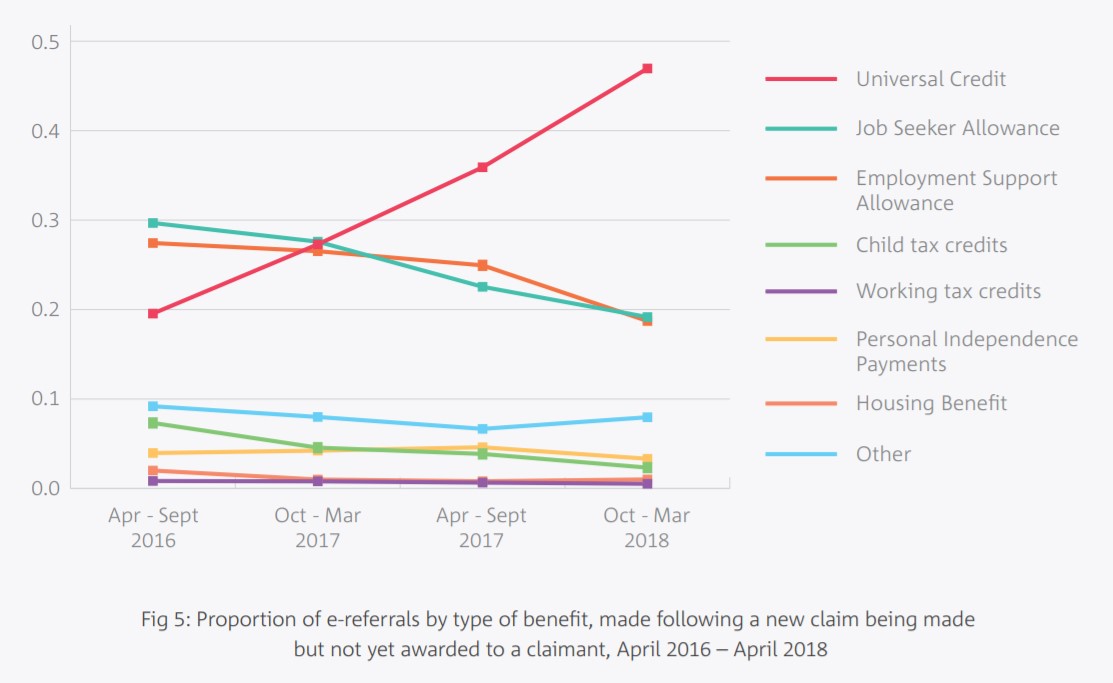 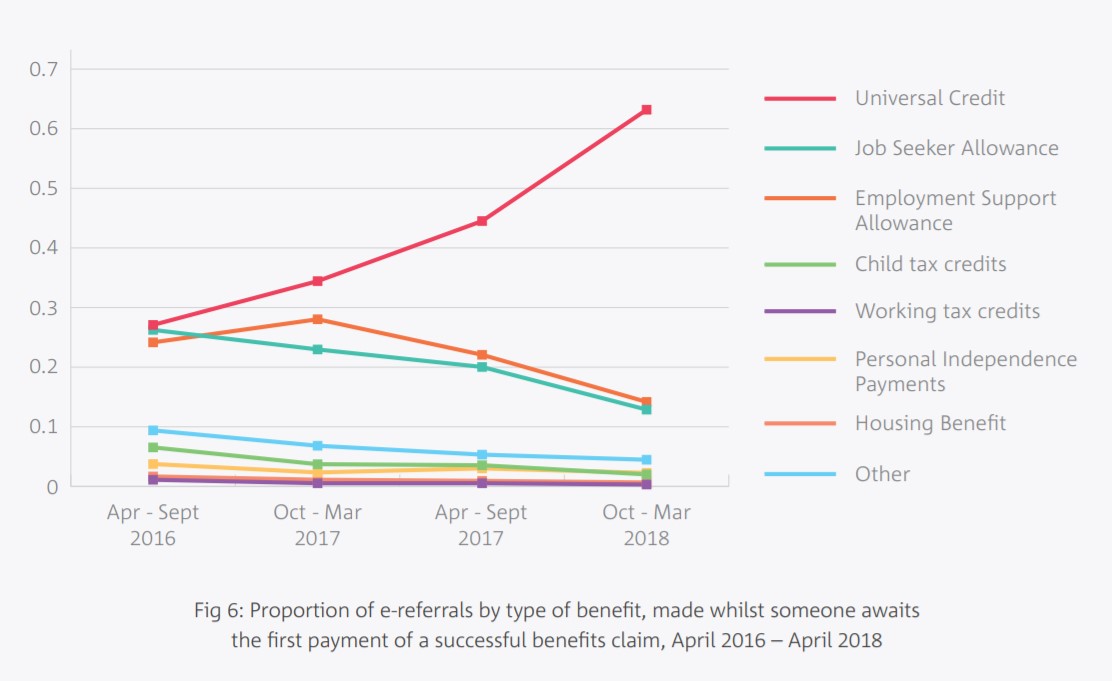 Overall, the Trussell Trust said that:

Universal Credit appears to be the benefit most closely linked with foodbank use if someone is transitioning onto a new benefit.

It says the DWP needs to do three things:

The DWP said this week that it was giving £51m to the Citizens Advice Bureau to roll out Universal Support; a move that has been controversial. It told The Canary:

Universal Credit simplifies an out-of-date, complex legacy system. It removes the ’16 hour rule’ which disincentivised work, and covers 85% of child care costs to support claimants in work. Each claimant is assigned a one-to-one work coach, who is able to provide tailored support, addressing each individuals’ specific needs and barriers into work. Through our ‘test and learn’ approach, significant improvements have been made to the system, such as making 100% advances available, removing the 7 waiting days, and providing 2 additional weeks of housing benefit for claimants moving from legacy benefits to Universal Credit.

Managed Migration extends the benefits of Universal Credit to legacy claimants, opening up work and ensuring that support reaches those who need it most – there are currently hundreds of thousands of people failing to claim £2.4bn of benefits because they are unaware of what they can receive, and Universal Credit will fix this.

We will deliver managed migration in a way that helps claimants move to Universal Credit smoothly. During 2019 we will test and refine our processes to ensure they are working well before we take on larger volumes from 2020 onwards. We will communicate with claimants to ensure they are prepared, through a variety of approaches, including through the post, the media and telephone calls. Our focus will be on safeguarding people and ensuring a smooth transition without any interruption to the support provided.

But there’s a problem with the Trussell Trust’s analysis of, and position on, Universal Credit. Because it’s at odds with what trade unions and others are saying.

Both Unite the Union and the Trades Union Congress (TUC) have made ‘stop and scrap’ their official stance. Campaign group Disabled People Against Cuts (DPAC) has often warned of the dangers of Universal Credit, as has BENEFITS NEWS. So, the Trussell Trust is clearly at odds with a lot of thinking on the benefit.

While the Trussell Trust’s data is good, its position is less so. It needs to think about what it hopes to achieve by saying Universal Credit is fixable; and maybe consider if it’s serving the thousands of people relying on it as well as it can.

The Canary asked the Trussell Trust for comment. But it had not responded at the time of publication.

– Support the blogs Universal Credit Sufferer, Politics and Insights and The Poor Side of Life.

– Get involved with Disabled People Against Cuts (DPAC), fighting for disabled people’s rights.