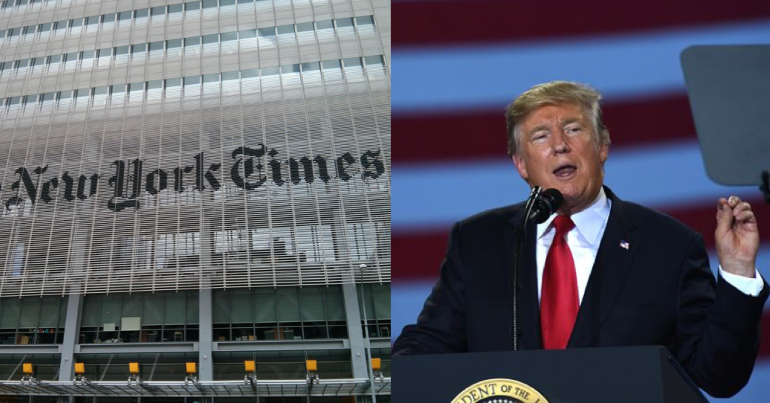 On 3 October, The Canary reported on a New York Times article that exposed some embarrassing secrets about President Trump’s financial history. The investigation revealed that Trump’s claim of being a ‘self-made man’ is very questionable, given that he allegedly received hundreds of millions of dollars from his family.

It also provided evidence that a huge inheritance was made possible through shady tax-dodging manoeuvres, some of which may have been illegal. And it discussed how the Trump family fortune was made possible in large part through federal government spending.

Since then, the revelations have created both forceful denials from the White House and a storm of comment on social media.

It’s a totally false attack based on an old, recycled news story. I’m not going to sit and go through every single line of a very boring 14,000-word story… The president’s lawyer addressed some of the specific claims, and walks through how the allegations of fraud and tax evasion are 100% false and highly defamatory.

Trump himself reacted in characteristic fashion. First, he threatened to sue the New York Times for libel. Washington Post reporter Paul Farhi pointed out that the threat was likely an idle one, however, given that he has previously failed to follow through on threats to sue the Washington Post, the Associated Press, a TV news host, a book publisher, and several sexual assault accusers. Predictably, he later took to Twitter:

The Failing New York Times did something I have never seen done before. They used the concept of “time value of money” in doing a very old, boring and often told hit piece on me. Added up, this means that 97% of their stories on me are bad. Never recovered from bad election call!

Unfortunately for Trump, the Department of Taxation and Finance seems to be taking the matter rather seriously. It announced on the same day the article was published that it’s opening a probe into its allegations. Though the statute of limitations has passed for prosecution on criminal charges, there is no limit on civil fines for tax fraud. This leaves open the possibility that Trump could face legal proceedings over the alleged crimes.

New York City mayor Bill de Blasio, meanwhile, said he will look into ways to potentially recover some of the allegedly lost tax revenue. He said:

The City of New York is looking to recoup any money that Donald Trump owes the people of New York City. Period… that’s money that could be going to veterans… to seniors… to kids that he should have paid in taxes and didn’t.

Figures from both left and right have since taken to Twitter to mock Trump:

Trump later tonight: "I WAS A SELF-MADE MIILIONAIRE BY AGE 8!!!"

Trump Engaged in Suspect Tax Schemes as He Reaped Riches From His Father https://t.co/2Ti4wpycrF pic.twitter.com/eaOl3WHSnp

Donald Trump was a millionaire by the time he was 8 (@nytimes). Now that’s what I call entrepreneurial. You have to sell a lot of lemonade as a kid to make that much.

One Twitter user pointed to the failures in the rule of law that allow tax dodging to take place in the first place:

the @nytimes expose of the Trump family's tax fraud leads me back to the question: Why weren't they caught? Because, as I wrote before, rule of law has failed in America already. Trump's presidency is not the cause, it is the result.https://t.co/8Gz2t6n3LA

And Alexandria Ocasio-Cortez pointed to a possible source of Trump’s insecurity:

45 is an utter fraud in every sense of the term, down to his fabricated “self-made” story.

Perhaps this is why the far right loves to go after working class candidates like myself & others: they’re insecure. https://t.co/QyDTpJdvtL

The myth of the ‘self-made man’

It seems that Trump’s rise can be explained in large part by the US public’s long-held fetishization of the so-called ‘self-made man’. On 4 October, the lead reporter on this story, David Barstow, appeared on Democracy Now!. And he said:

the narrative that Donald Trump has sold to the public for many decades now, the thing that made him famous, that gave him political power and that, ultimately, I think, was the central focus of his presidential campaign, is this narrative that he is a self-made billionaire. And what this story really reveals is the extent to which that just simply doesn’t square with the facts that are uncovered and that we show in this story.

If the allegations turn out to be true, in other words, then it seems Trump built a story of his life based on a complete lie. And for many people, that would be unacceptable.

– And if you want more voters to choose the best candidate over the best-funded candidate, then support anti-corruption groups like Move to Amend, Represent.US, and Wolf-PAC.