A Muslim girl on Question Time told a white guy what’s what. Here’s what I’d like to add. - The Canary 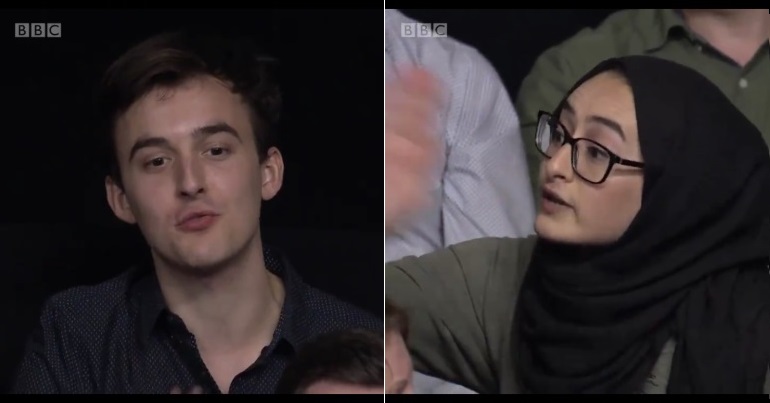 It’s been a while since I’ve watched Question Time or, for that matter, the BBC in general. But a clip from last night’s programme resonated so much with me.

If you actually looked at the numbers, the UK is one of the least racist societies across Europe.

''The UK is one of the least racist societies across Europe"

George responded with sarcastic thanks to the man for whitesplaining. And a Muslim sister piped up in support:

How are you going to experience [racism]? You’re a white man!

Sadly, after the programme ended, the whitesplaining continued. It appears Britain being the least racist country – purely in terms of attitudes towards Muslims, interracial relationships, and diversity – is a real achievement:

2/ The U.K. has the least unfavourable view of Muslims of any European country polled by Pew. pic.twitter.com/S6EcL1w2bl

What this seemingly objective data fails to show is that public attitudes alone are not an accurate measure for racism. Racism is not just about intolerance based on traits like skin colour or heritage. Rather, it’s about the imbalance of power – between those in society who have power, and are privileged because of it, and those who don’t.

Racism is a complex, multi-faceted issue which manifests in hate crime, employment, education, public policy and more. And people who haven’t experienced racism aren’t in a position to tell people of colour that Britain isn’t all that racist. In Britain in particular, the state is one of the worst offenders for racism against Muslims and people of colour. The Windrush scandal, the Grenfell tragedy and Prevent are three key examples.

The Windrush scandal is one of the most blatant examples of racism in present-day Britain. The scandal may be unsurprising as an extension of the ‘hostile environment‘ created by Theresa May. But it still proved to be shocking in its refusal to recognise the rights of the Windrush generation who came to the UK on invitation from the state itself to re-build Britain post WWII.

While home secretary Amber Rudd resigned in the wake of the controversy, the victims of the scandal continue to suffer. The Windrush generation and their descendants have been denied healthcare under the NHS. Some have died after being deported. But I’m sure it would be a comfort for the families of these victims to know that Britain is one of the least racist societies in Europe.

Few cases in recent years have demonstrated the intersection of class and ethnicity as vividly as the tragedy of the Grenfell fire. The majority of victims were from Black and Minority Ethnic (BAME) families.

The cladding on the building failed fire safety standards and had been downgraded to a cheaper version to save on costs. The fire reportedly caused 72 deaths. If ever there was an example of how little the lives of Black and Brown people matter in British society, especially those poor enough to need to rely on the state, Grenfell is it.

Islamophobia on all levels of British society has been well documented and isn’t news to anyone. Hate crime against Muslims remains rampant. And anti-Muslim bias in the media and employment is not going away any time soon. But perhaps the worst offender is the state-sponsored Prevent strategy, which is now one of the clearest examples of state racism against Muslims.

Under Prevent, Muslim children as young as four have been reported on suspicion of radicalisation. De-radicalisation remains Muslim-focused, despite the fact that white people made up the highest number of arrests for terror offences in 2017/18. At the Islamic Sunday School where I teach, we remain forever vigilant over who may be listening in on lessons. And this is the case with mosques, madrasahs and Muslim schools across the country.

The fact that the overwhelming majority of British Muslims are also people of colour is no coincidence. It demonstrates the intersection of ethnicity and religion at which BAME Muslims find themselves. Add to this another layer of oppression for Muslim women of colour, having to face gendered Islamophobia and racism all at once.

So while Britain may hate Muslims or diversity slightly less than the rest of Europe, this doesn’t make us feel any safer. And white people would do well to remember this the next time they decide to use facts and figures to deny someone’s lived experience of racism.

– Write to your MP demanding justice for Windrush victims and Grenfell survivors.

– Write to your MP asking them to scrap the Prevent strategy and end state surveillance of Muslims.