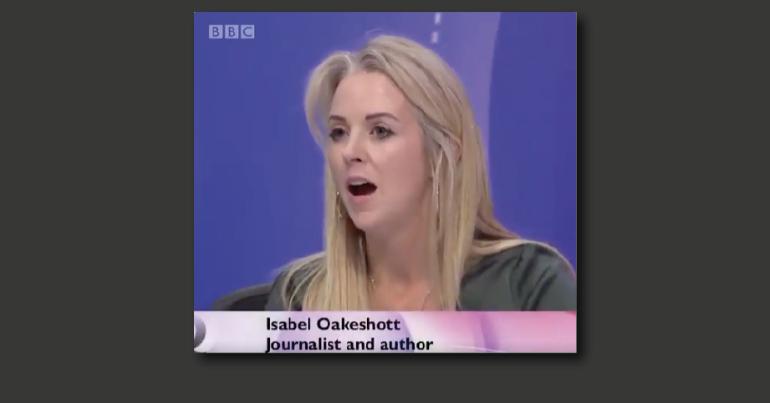 To say BBC Question Time‘s reputation isn’t what it used to be is an understatement. On 4 October, it damaged it further by having Isabel Oakeshott as a guest.

Call her a journalist

Oakeshott was formerly a political editor of the Sunday Times and editor-at-large at the Daily Mail. She infamously wrote Call me Dave – the biography of David Cameron which included the accusation that he made privileged, Etonian love to a severed pig’s head. That produced a lot of funny memes at the time, but it didn’t win any awards for journalism. Oakeshott later admitted that the Piggate allegation was only single-sourced and that the source:

could have been slightly deranged.

Hang on, this isn’t Watergate. I don’t think you would have put a team of researchers on one little anecdote.

It’s also worth pointing out she wrote the book with Lord Ashcroft – a Tory donor who had a serious falling out with Cameron. This was allegedly because Ashcroft was revealed as a tax-avoiding non-dom, and Cameron backed out on plans to give him a job in the Coalition government.

Oakeshott and no smoking barrels

Question Time should have expected a backlash to Oakeshott’s appearance. The same thing happened in June – that time because of Oakeshott’s relationship to the Cambridge Analytica scandal. Oakeshott accused Guardian journalist Carole Cadwalladr of “chasing unicorns” with a story showing links between Brexiteers, Russia, and Cambridge Analytica. It later turned out Oakeshott had been sitting on emails showing links between prominent Brexiteers and – you guessed it – Russian officials.

She’d had these for several months but claimed to be saving them for a book she was writing. She didn’t explain why other journalists pursuing the story were “chasing unicorns”.

But was Question Time used as a platform to question Oakeshott’s activities?

You can't really refer to Isabel Oakeshott as a "journalist" without adding the addendum of "who knowingly sat on potentially incriminating evidence while publicly deriding anyone who dared suspect said evidence even existed"#bbcqt missed that bit out of course. As always. pic.twitter.com/PwxhhAtVlh

People had a few complaints about Oakeshott featuring as a guest:

Isabel Oakeshott is on #bbcqt tonight. Isabel is essentially the mouthpiece of Belizean billionaire non dom Michael Ashcroft. That's fine… but could the BBC perhaps point this out rather than pretending that she's just some ordinary hack plying her trade.

Can anyone tell me how the utterly discredited Isobel Oakeshott merits a place on the #bbcqt panel? She attacked a fellow journalist concerning a story for which she was found to be hoarding material that would be damaging to the government. No integrity whatsoever.

Isabel Oakeshott spouting the ridiculous nonsense and outright lie, that it was Labour who brought about the financial crash in 2008. It was obviously the global financial banking crisis. That was a lie repeated over and over by the coalition to get through policies #BBCQT

Isabel Oakeshott says “it took free schools in the coalition era before we got more good and outstanding schools.”

Since 2010, 66 free schools have either failed to open, partially closed or collapsed entirely, at a cost of £150m

So guess Windrush is irrelevant and that whole pesky Nazi thing should be forgotten. Despite the terrifying resurgence of the far-right. Which her paper encourages.#bbcqt

Still though, not everything Oakeshott said was bad. She did reveal that – if nothing else – a Corbyn government would be bad for the sort of people who spent the last decade benefitting from austerity:

.@IsabelOakeshott says those in the City are concerned about the prospect of a Jeremy Corbyn led government #bbcqt pic.twitter.com/5Mr3NXP4xb

For the many, not the few.