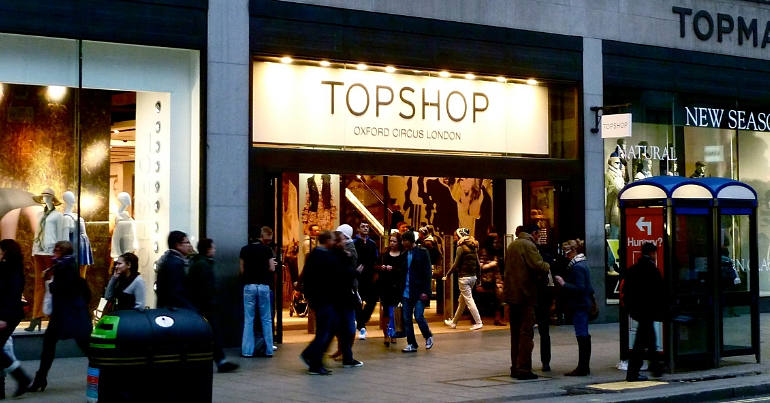 Fashion store Topshop has come under fire after removing a pop-up display promoting a feminist book from its flagship Oxford Street store in London.

The book, Feminists Don’t Wear Pink (and other lies) is a collection of writings by women on “what the F-word means to them”. It is aimed at young women, with royalties going to the UN’s Girl Up project, a “global movement of empowered young women leaders who defend gender equality”.

Publisher Penguin had arranged a pop-up stall in Topshop to promote the book. However, Topshop dismantled the display shortly after Penguin had set it up:

For anyone hoping to visit the pop-up, after a huge amount of work on this ground-breaking partnership we assembled our stand this morning and were raring to go – however, just twenty minutes later it had been dismantled by Topshop.

Penguin did not give a reason for the removal of the display, but according to the Guardian, Topshop removed it after it was seen by company chair Philip Green. Green is a tax-avoiding billionaire.

Actor Thandie Newton, a contributor to the book, had no doubt what the issue was:

Yesterday #PhilipGreen used his big muscles to smash up the @Topshop @penguinrandom #FeministsDontWearPink pop-up because he thought it was too controversial!!? ?? LOSER @scarcurtis https://t.co/eWao4h5ZhO

I'm not allowed to say much on this right now but let's just say I am heartbroken and the patriarchy is still alive and kicking… #PinkNotGreen https://t.co/2LuDGO0lZA

Green may object to feminist writing in his stores, but he has no objection to making money from selling ‘Feminist’ t-shirts. And Twitter users were quick to point out his hypocrisy:

The hypocrisy of Philip Green is astounding. Does he know how many feminist t-shirts he's flogged in TopShop? And then to SHIT on business deal for a book whose profits go to charity? YOUR MISOGYNY MAKES YOU LOOK DEMENTED AND A LIABILITY TO YOUR BUSINESS.

All this from a brand that sell slogan t shirts reading ‘Feminist’, ‘Females of the Future’ and ‘Nothing Stronger Than Girl Power’. You don’t get to strip all meaning from feminism and then lash out when people talk about what it really means. Shame on you @Topshop #pinknotgreen https://t.co/GY1KNCwYYh

For the release of feminists dont wear pink Topshop agreed to do a pop-up which was dismantled by Topshop/Phillip Green hours after opening. Im so sick of brands profiting from feminism when it’s convenient for them to make money but not when it’s making real change #pinknotgreen https://t.co/fQJodxvdUM

Ultimately, however, Topshop has shot itself in the foot. Because the row has generated a lot of negative publicity for the store, and made many more people aware of the book’s existence.

Feminists Don’t Wear Pink is now high up the Amazon bestseller list. It’s likely that this is in large part because it resonates with young women in the era of #metoo. But the Topshop publicity has almost certainly given it a big boost. This may not have been the result that Philip Green intended.